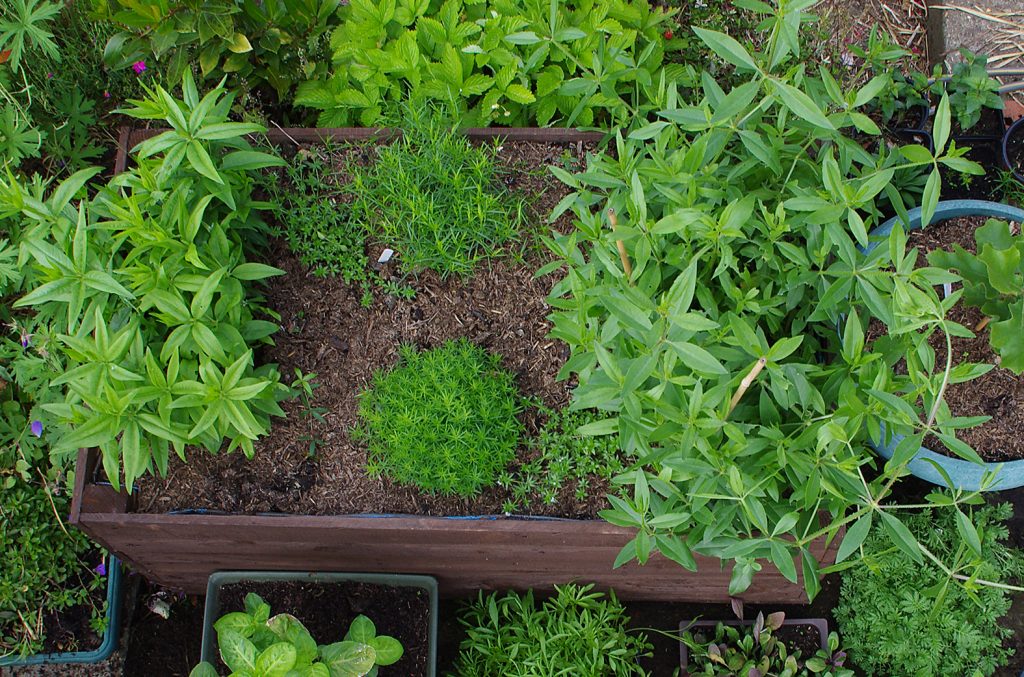 The container in year one, seen from the top with a madder plant at each end and in the centre one Dyer’s woodruff (top) and a cushion of Ladies Bedstraw (bottom). To either side are small annual plants of Field Madder (Sherardia arvensis).

Over 3 years ago we made a large container (planter) from pallet wood and planted two Common Madder (Rubia tinctorum) plants, Lady’s Bedstraw (Galium verum) and Dyer’s Woodruff (Asperula tinctoria). Our plan was to see if madder grown in a deep planter would differ from madder grown in the ground. We also wanted to see how these three plants would  grow together. One of the madder plants was from a cutting obtained from the Southwark Cathedral Dye and Herb Garden, and looked a little different to the form we grow. 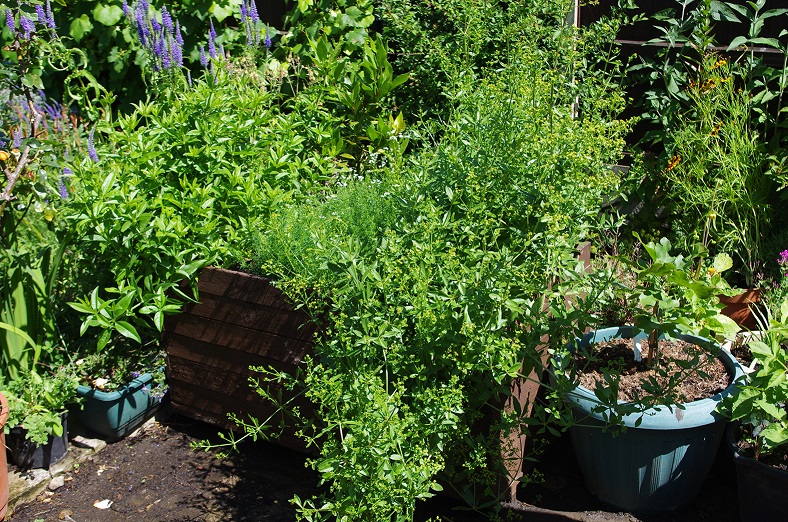 The madder planter in year two, with the Southwark Cathedral plant on the left and our normal madder on the right (you can see there is a difference). In the middle are Lady’s Bedstraw and Dyer’s Woodruff.

After growing for three years, our first conclusion is that madder is probably best grown on its own because it substantially outcompetes the other plants and the roots become entangled. By the end of the third year there were only a few tufts of the Lady’s Bedstraw and Dyer’s Woodruff left at the edge of the container.

See this short video of the harvesting process. Many apologies for the very poor quality of this video. We have yet to learn how to film properly from our digital SLR camera. Also we are in an urban setting and the sounds of daily life abound.

I have to say that I found the experience of getting the root out of this container almost as difficult and strenuous as digging it out of the ground, so I am going to change my advice to other growers and recommend that they carefully choose the sort of container they use. I don’t recommend planting in the very largest container you can find; better to choose a medium sized one or a large container that can be dismantled easily. A stack of tyres or a patio planter designed for potatoes might have been better. The main difficulty of harvesting the root from the container was not sorting through the soil but creating space to do the sorting followed by tidying it up afterwards. Down in the dye garden there are no such worries.

Differences between growing Madder in a container vs in the ground

These are the characteristics I can be certain of. Other interesting differences of the container grown Madder that we noticed were:- 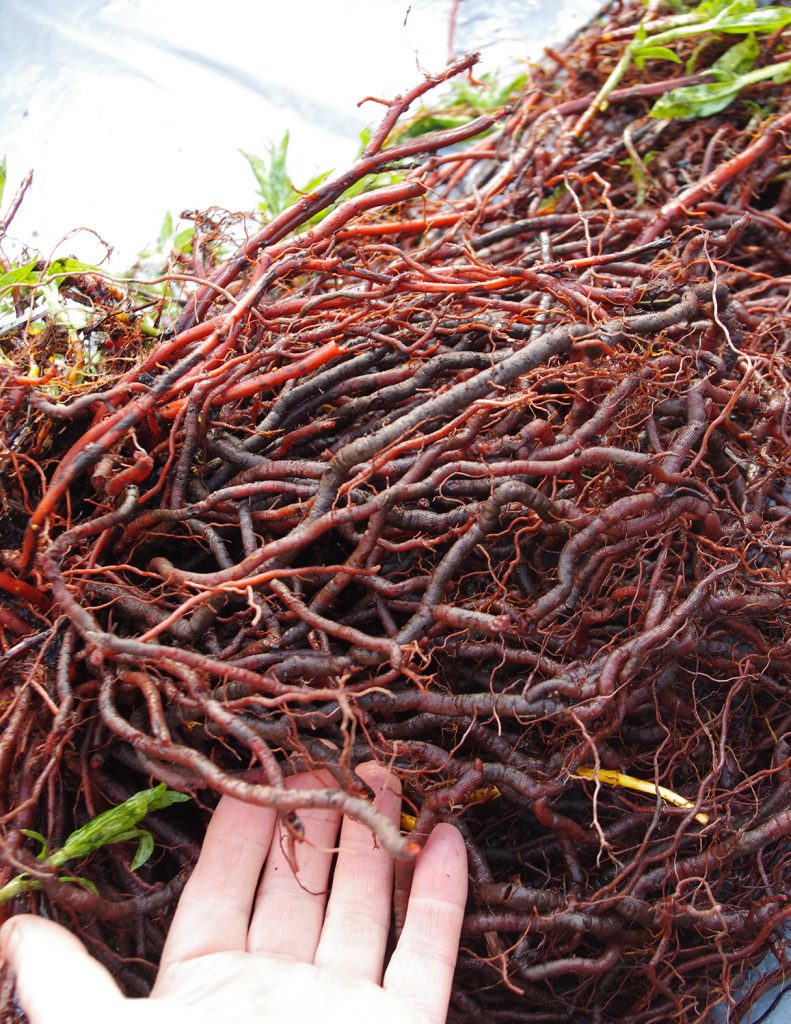 Cleaned Madder crown. Most of this root is wiggly true root. with hand for scale. Some of the root is very dark.

Overall we obtained just over 2kg of fresh root from the planter (dimensions 1m x 55cm x 50cm). This works out as approx 330g of dried root which is about a sixth of the weight of fresh. 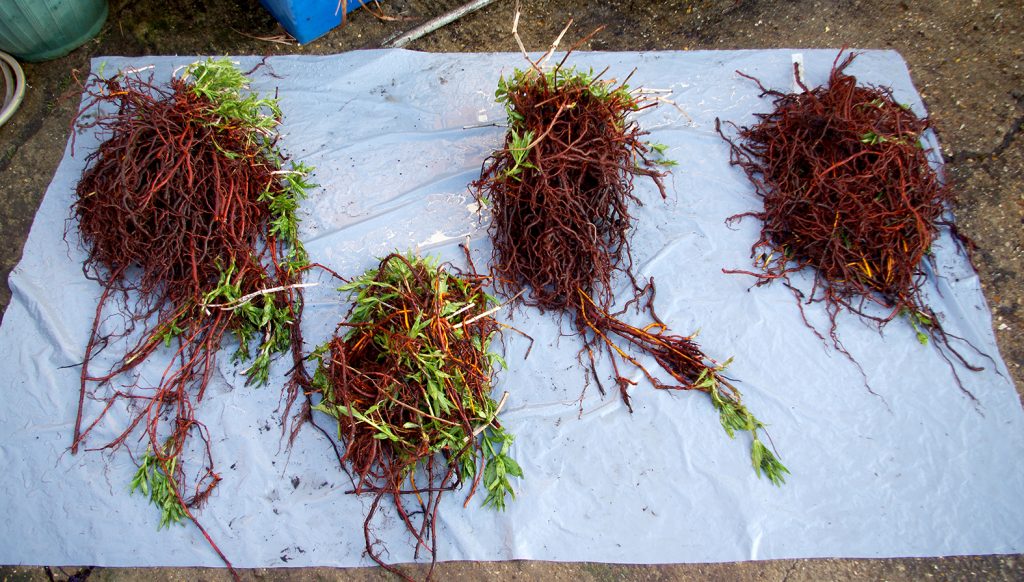 The reasons for growing in a container:

Of these reasons I will now strike out number 4 and advise people with limited growing space to grow in smaller containers or ones designed to be dismantled easily even though this may mean more maintenance. I would also advise people to be less cautious about growing in the ground but if you do decide to do so, keep the madder well away from your other perennials or place an underground barrier around the madder. Growing in the ground can be a lot easier!

Note from Susan: In summer and autumn the scratchy aerial parts of the mature madder plants in the planter scrambled over and through other patio plants. In our very small garden I found this annoying. I inserted supports to try persuading the plants to grow vertically instead. I also planted some daffodils in the container in the final autumn to cheer up the space when the madder was dormant in early to mid-Spring. This was seen as an act of sabotage! 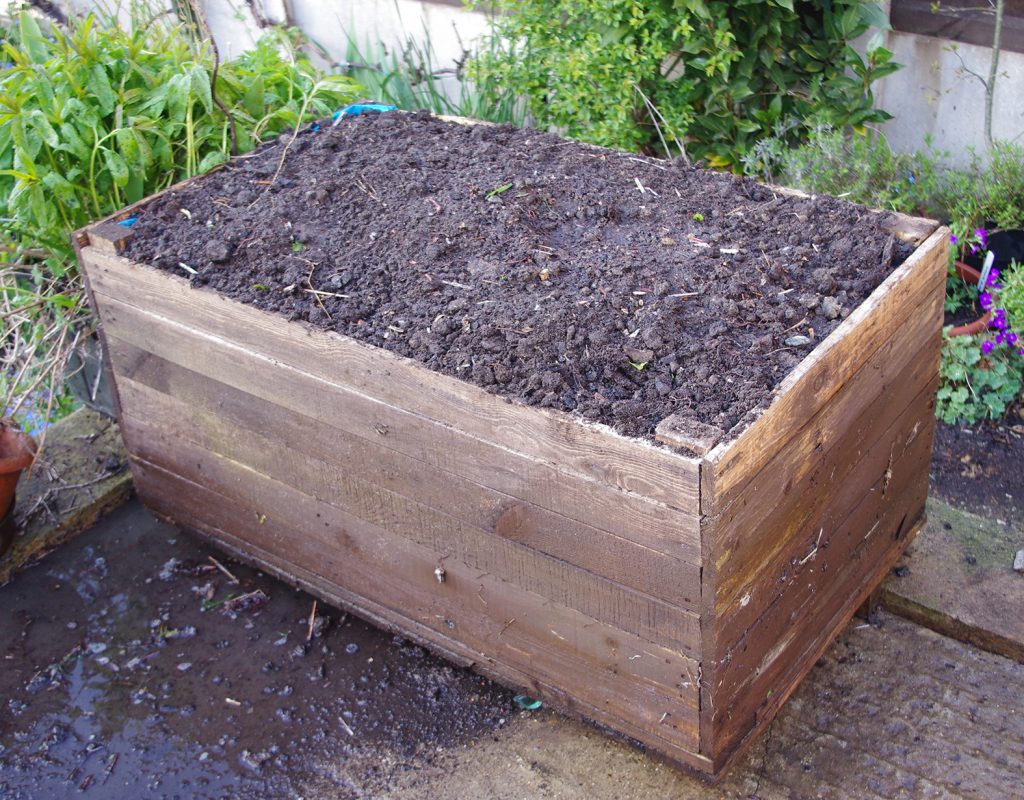 After mixing the original soil with a large bag of farm manure to restore fertility, the container is ready for replanting.