The best time to get most seeds going in the UK is the Spring, from April to June. But not to worry, if you missed the Spring opportunity there are still some seeds you can get going later. There are obvious problems with mid-Summer* sowing including the hot dry weather when the growing medium (soil or compost) can dry out before the seeds get a chance to germinate. Seeds will also often remain dormant during short periods of unseasonal wet weather (ie a sudden downpour in the middle of a heatwave). This is a protection mechanism to ensure that seeds do not start to germinate after a short period of rain followed by more hot dry weather and also to stop seeds germinating in the seed receptacle or flower head after rain. The ideal conditions for germination are steady moisture levels.

Another problem with germinating seed in mid-Summer is the sheer quantity of plant pests around at this time of year, ranging from flea-beetle and other beetles to assorted caterpillars, aphids and slugs. Even in dry conditions slugs and snails will come out from their damp hidey-holes during the night and by the morning your precious seedlings may be gone.

However, there are also advantages to sowing seed at this time of year. Once germinated the seedlings will grow very fast in hot weather and can easily catch up with plants sown from seed in the Spring.

So the first thing you need to think about is can you keep the seeds continuously wet for at least a week to allow the seeds to germinate? If you have sown seed directly into the soil outside then this may mean watering two or even three times a day and shading your nursery area from direct sun. I would recommend choosing a cool and shady indoor location to get the seeds germinated. Once the seedlings start coming up you can move them to a brighter area (initally still out of direct sun) outside. Watering can then be reduced but it’s still very important to monitor the seedlings one or two times a day to make sure they don’t dry out. Then transplant the seedlings into pots and grow them on until they are big enough to plant out.

Pay particular attention to protecting your seedlings against pests. Place seed trays on shelves out of reach of slugs and snails. If the plants are susceptible to aphid, caterpillar or beetle attack you can use some kind of fine netting to cover the seed trays. Growing indoors in a cool conservatory would be ideal but an outdoor shade tunnel or a cold frame situated in a cool shady area could also work well.

Let’s have a closer look at some dye plants which are suitable for mid-Summer sowing.

These seeds are always looking for an opportunity to germinate and will do so in almost any conditions. Dyer’s Chamomile will germinate in four days and will grow very fast to flower in the Autumn and again in the early Summer of the following year. The young seedlings can get nibbled by slugs and snails and very occasionally by aphids, but generally these plants have few problems. 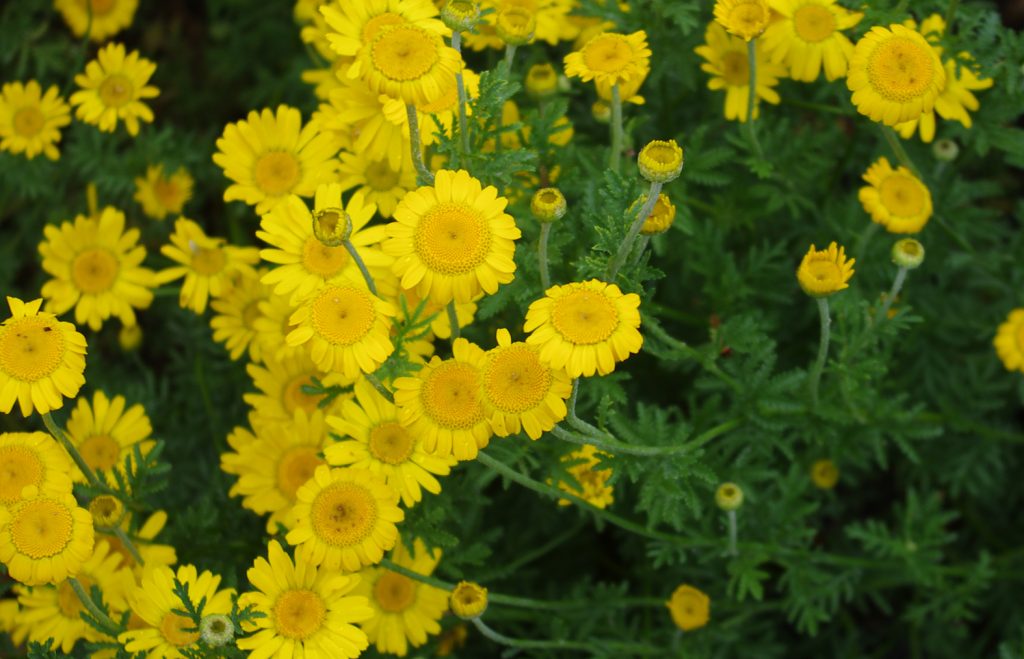 Second year Chamomile in flower. You can always tell a good dye producing flower as it does not get bleached in the sun.

As a perennial this shrub needs a few years of growth before it will be big enough to start harvesting, so best to get it started as soon as possible rather than wait for next Spring. Germination is around 2 weeks. First year seedlings are relatively small and vulnerable but if started now will easily survive the Winter frosts. Probably best to pot up seedlings for the Winter and plant out into final position the Spring. The plants are very vulnerable to slug and snail attack when young and, when fully grown, occasionally suffer from aphid attack on the young shoots. 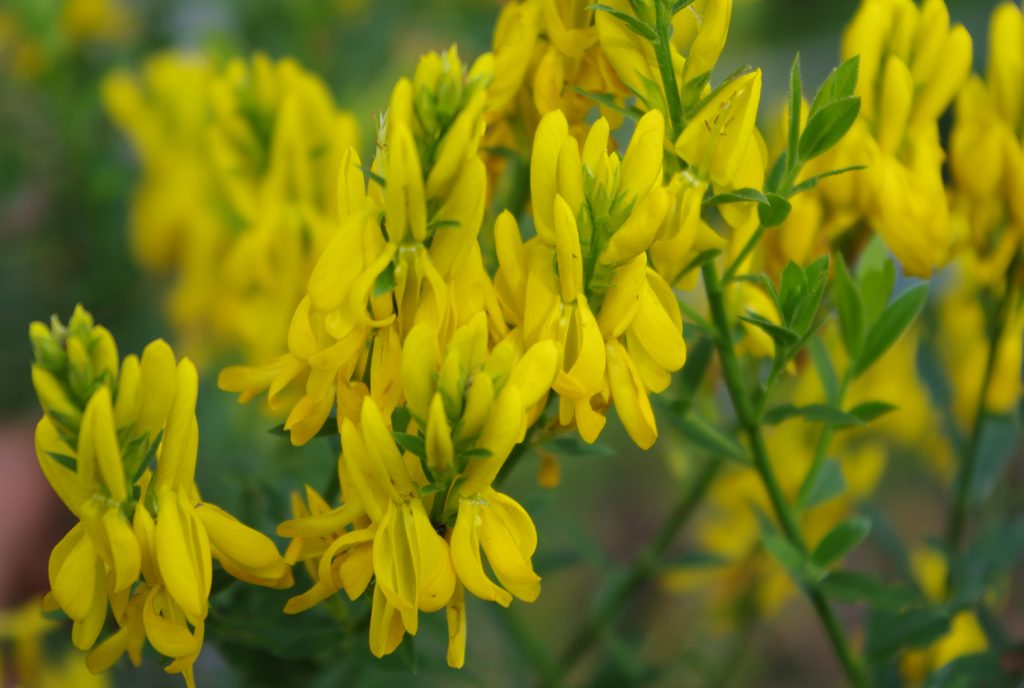 These two similar plants are perennials and to begin with they are quite slow growing. They are both native wild plants very well adapted to growing in the UK. The seed of these plants usually germinates in the Spring or Autumn so getting them going now can be a challenge. They need at least two to three weeks before seedlings will appear. Germination is slow and erratic. Seeds are small so should be only barely covered with compost and the temperature should be kept cool around 20ºC. Once big enough they should be separated into individual plants and planted in pots for overwintering. Plant out in the second year. There do not appear to be any major pests. 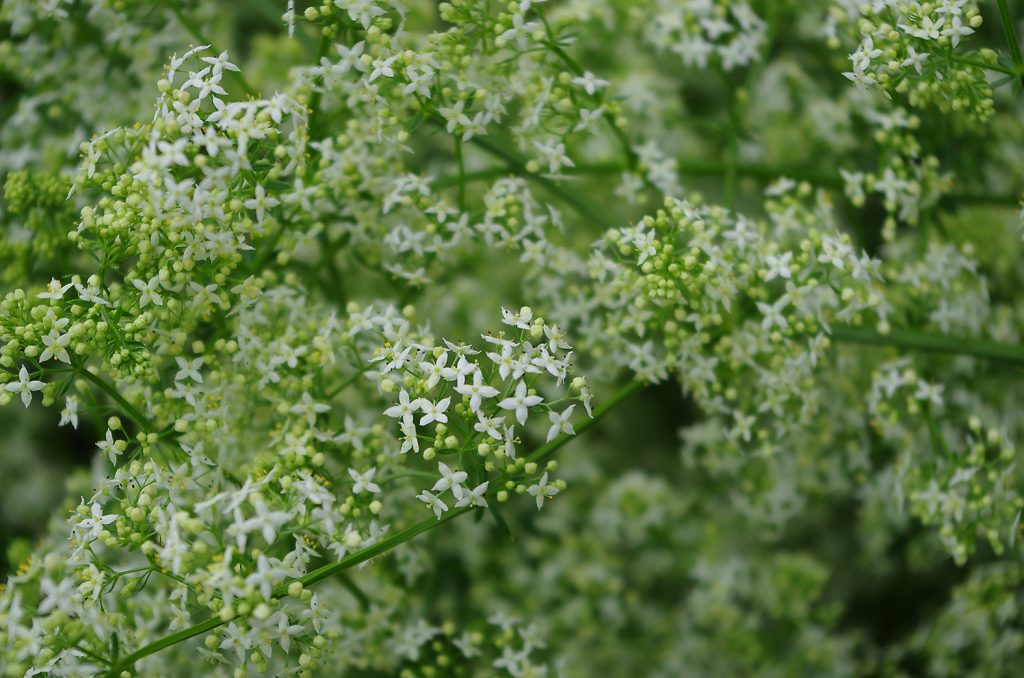 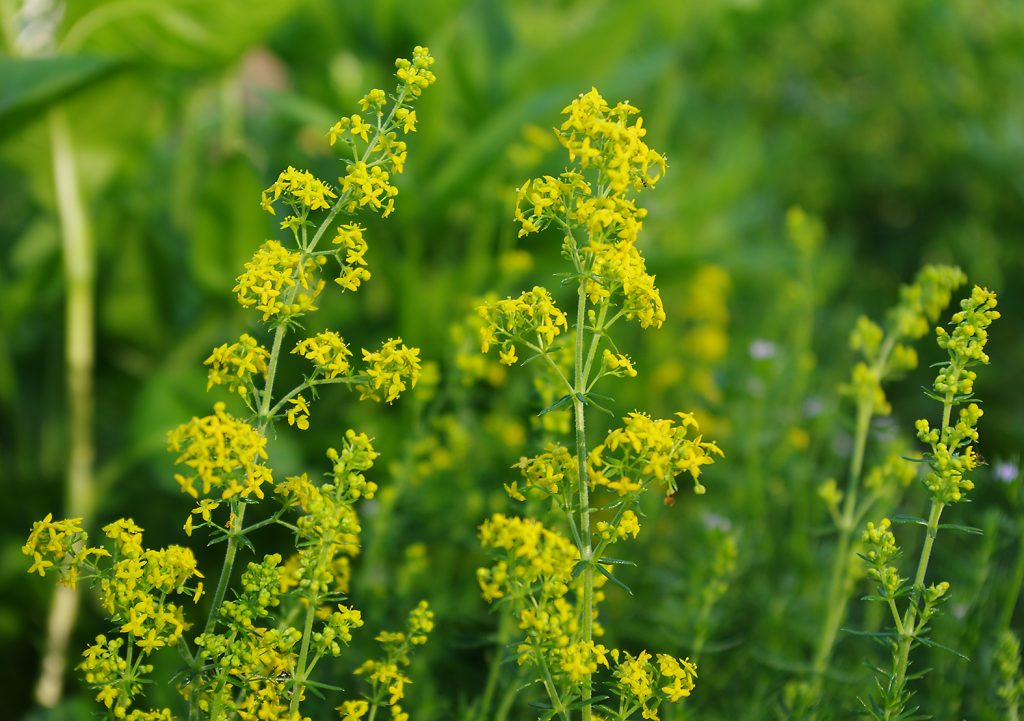 This native is one of the few plants that could be sown direct but it has a reputation of failing to germinate. This is almost always because the seed has been sown too deep. Some seeds at the surface do germinate at around day six, but the tiny young seedlings are almost always eaten by pests or crowded out by weeds. Sowing in the dry summer heat may produce a better result providing the seed is scattered on totally bare soil which has not been dug or tilled and is lightly watered in the evening every other day. The soil surface needs to be fairly flat and level, otherwise the seed will fall into dark crevices and fail to germinate. Failing this, sow in modular seed trays and plant out the plugs when big enough, taking care not to damage the roots.

Planting in mid-summer gives ample time for this biennial plant to grow to a reasonable size before the winter arrives. It will then flower in the following early summer when it can be harvested. 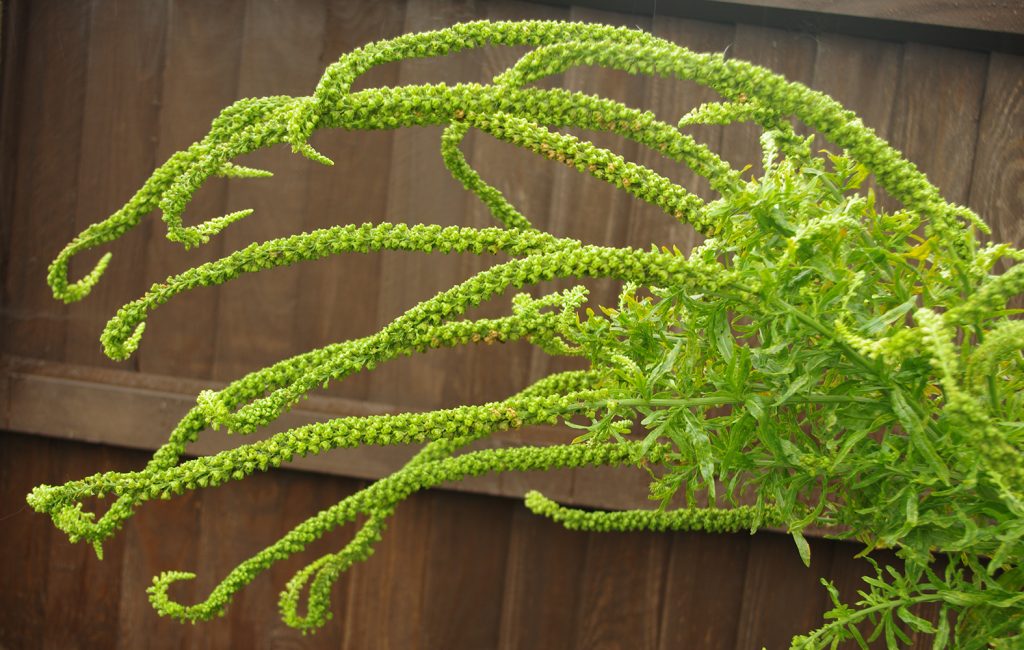 This plant from Northern China grows in weather conditions very different to that in the UK and as a result it behaves like an annual with a strong tendency to produce flowers within a short time of sowing so the plants never get the chance to become large. As with European Woad it is the early rosette leaves that are best for indigo production so they are best picked while the plants are very young. This means growing a lot more plants and closer together. One of the triggers for flowering is night time temperature. If the temperature at night falls below 5ºC the plant is stimulated into flowering. Any damage to the tap root will also cause flowering so it’s best to sow direct in mid-summer when night time temperatures are high. The leaves can then be harvested in early September. Chinese Woad is highly susceptible to pests including Cabbage White caterpillars, Flea Beetles and Aphids which unfortunately are at their maximum in mid-summer so some netting may be required. 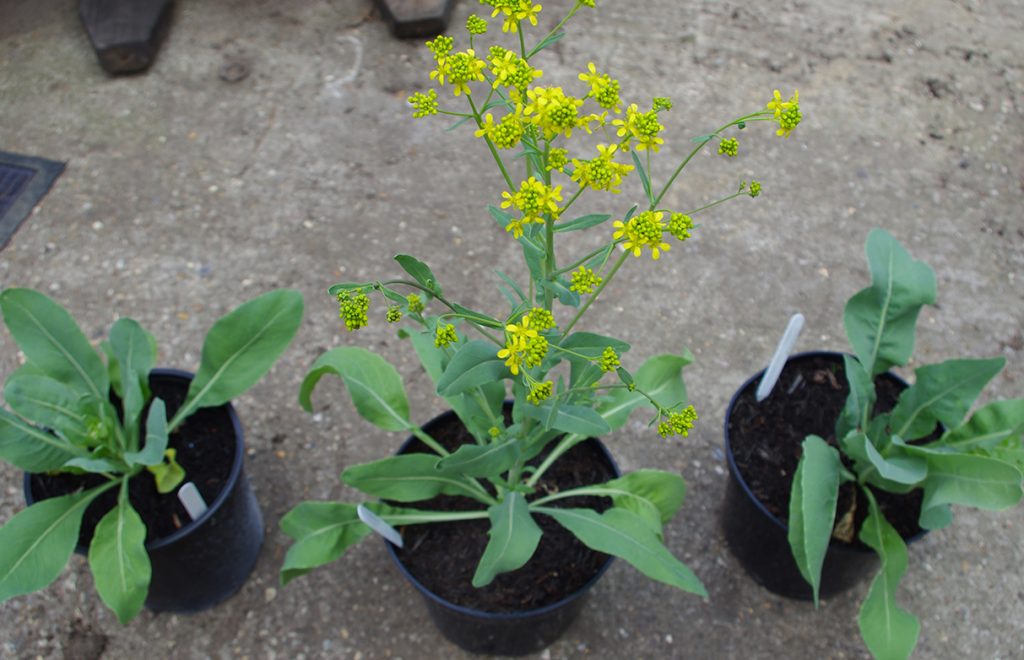 Chinese Woad (Isatis indigotica) growing in pots. Central plant already in flower. This is about as big as the plants get, for us at least.

This hardy perennial is a Japanese relative of Dyer’s Alkanet and needs a few years for the roots to grow large enough to harvest. So getting it going now will save time. The large seeds are easy to sow and germinate in around 10 days. In the summer heat these plants will grow fast and need to be potted on quickly when the plants are at the four leaf stage. Be careful to use a well-drained seed compost or water sparingly as the roots of this plant can easily rot if the compost is sodden. 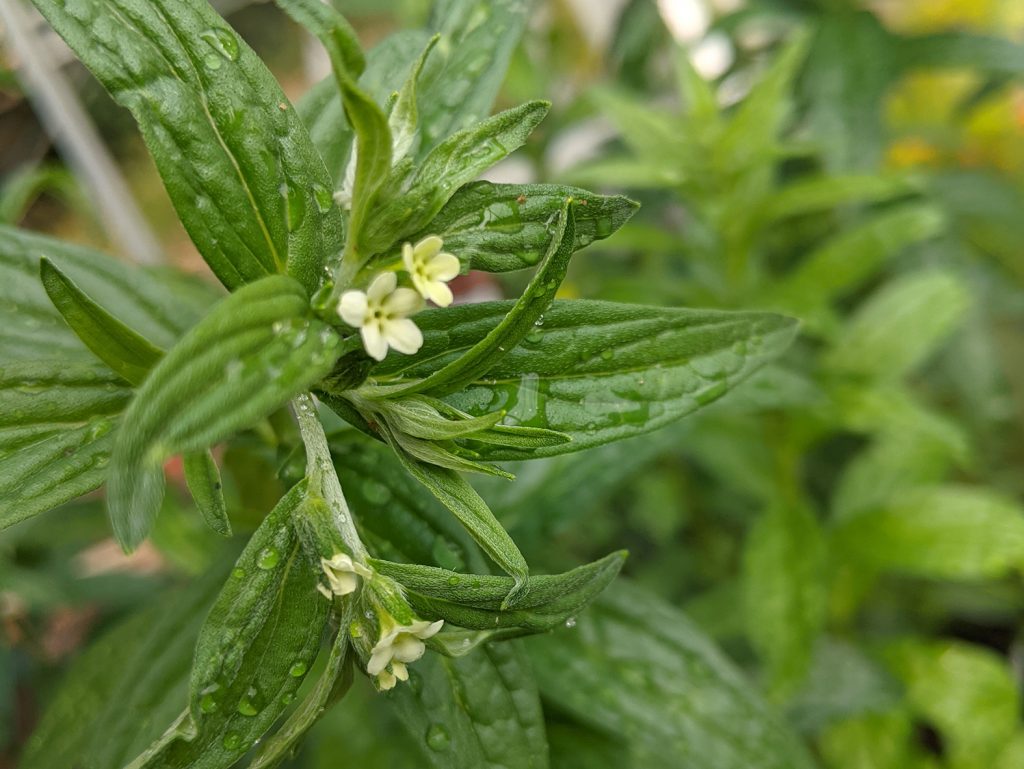 Murasaki (Lithospermum erythrorhizon) plant just coming into flower. The unobtrusive greenish white flowers are not very asthetic but are popular with insects.

There are other seeds which will grow well planted at this time of year or even later into the Autumn, but there is no particular advantage to be had by doing so unless you want to get the experience of growing and seeing what the seedlings look like. European Woad, for example, will grow well and you should be able to get at least one leaf harvest from it before winter but it will flower at just the same time in early spring of the following year as spring sown plants. So you would lose out on the possibility of getting up to 4 harvests from it if sown in spring. Dyer’s Coreopsis can be sown in the early Autumn as this annual is frost hardy and, provided that slugs can be kept at bay by early Summer, in the following year you will have a larger plant than you could easily grow in just one year. The drawback (if you can call it one) is that Autumn sown plants all flower at the same time and in great profusion and then die. So for a week or so you will get a fantastic display but it’s all over quickly and if you are busy, you might easily miss the harvest altogether. However if you want to grow it at large scale and harvest the flowers mechanically then Autumn sowing is for you. 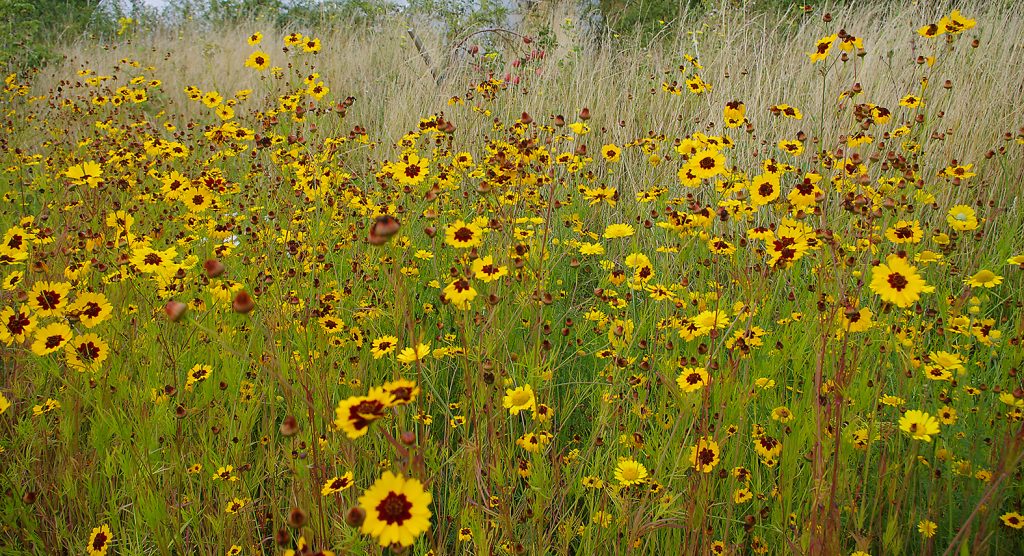 * My personal definition of the seasons in the UK is as follows:
Spring is March, April to May
Early Summer is June
Mid-Summer is July
Late Summer is August
Autumn is September, October
Late Autumn is November
Winter is December to February.