Whatever your views on the choice of plants this was an important event in the world of natural dyeing. One which, in my opinion, was unmissable despite the scorching ticket price and the uncomfortable crowds

I went with some sceptical views on both the design and plant choice. But after getting to grips with the whole madness of Chelsea and having a revealing chat with Lottie Delamain and representatives of Fashion Revolution I could see how the limitations of setting up a Chelsea Flower Show garden led to the final result. 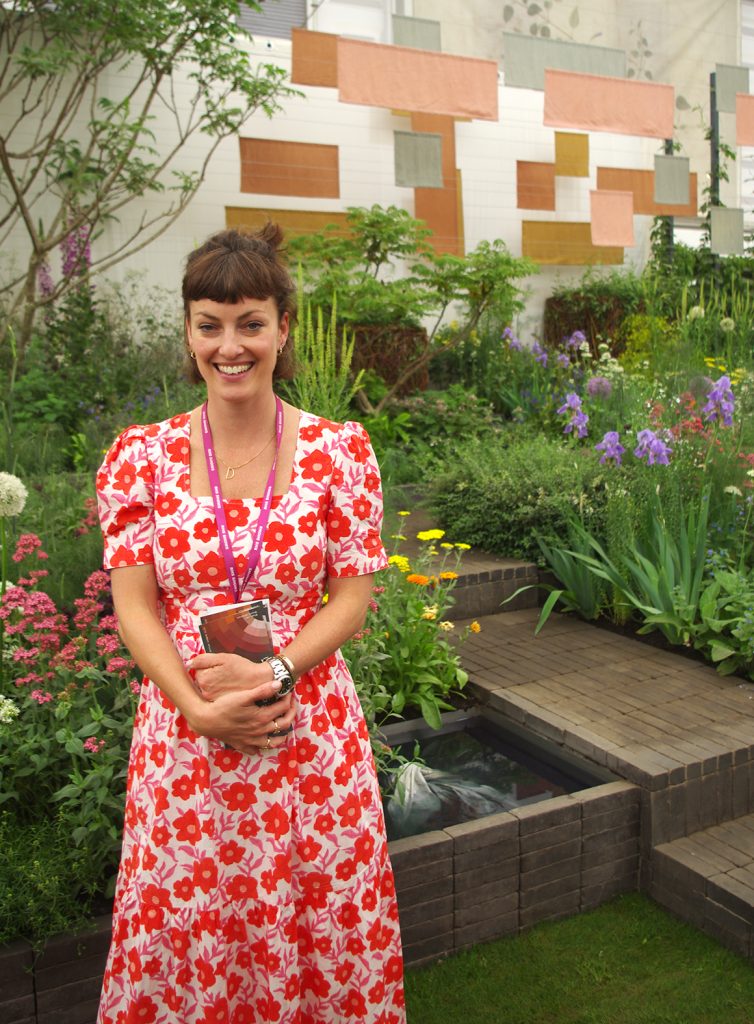 So, to just state the limitations as I see them:- 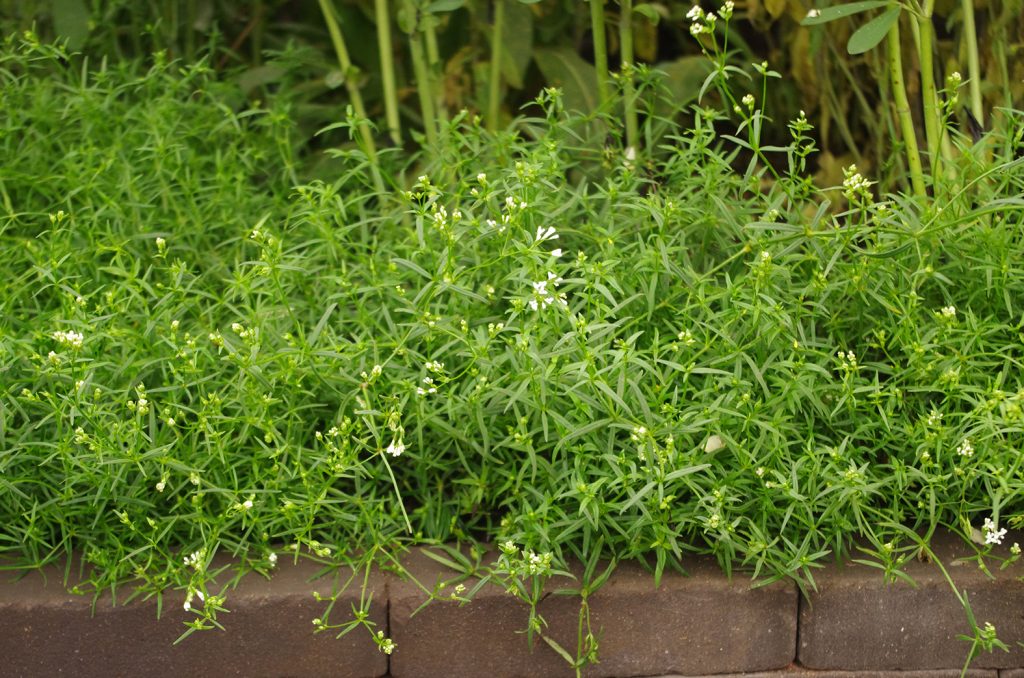 Dyers Woodruff (Asperula tinctoria) was used as an edging for many of the beds. Only just in flower, it had not properly recovered its delicate shape after transplanting. 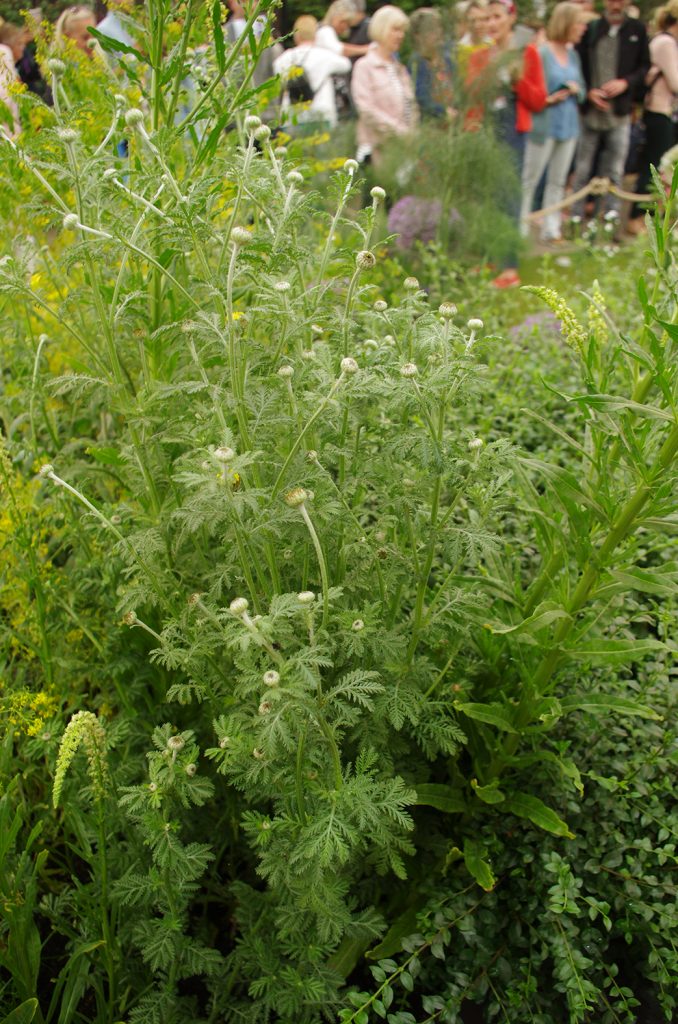 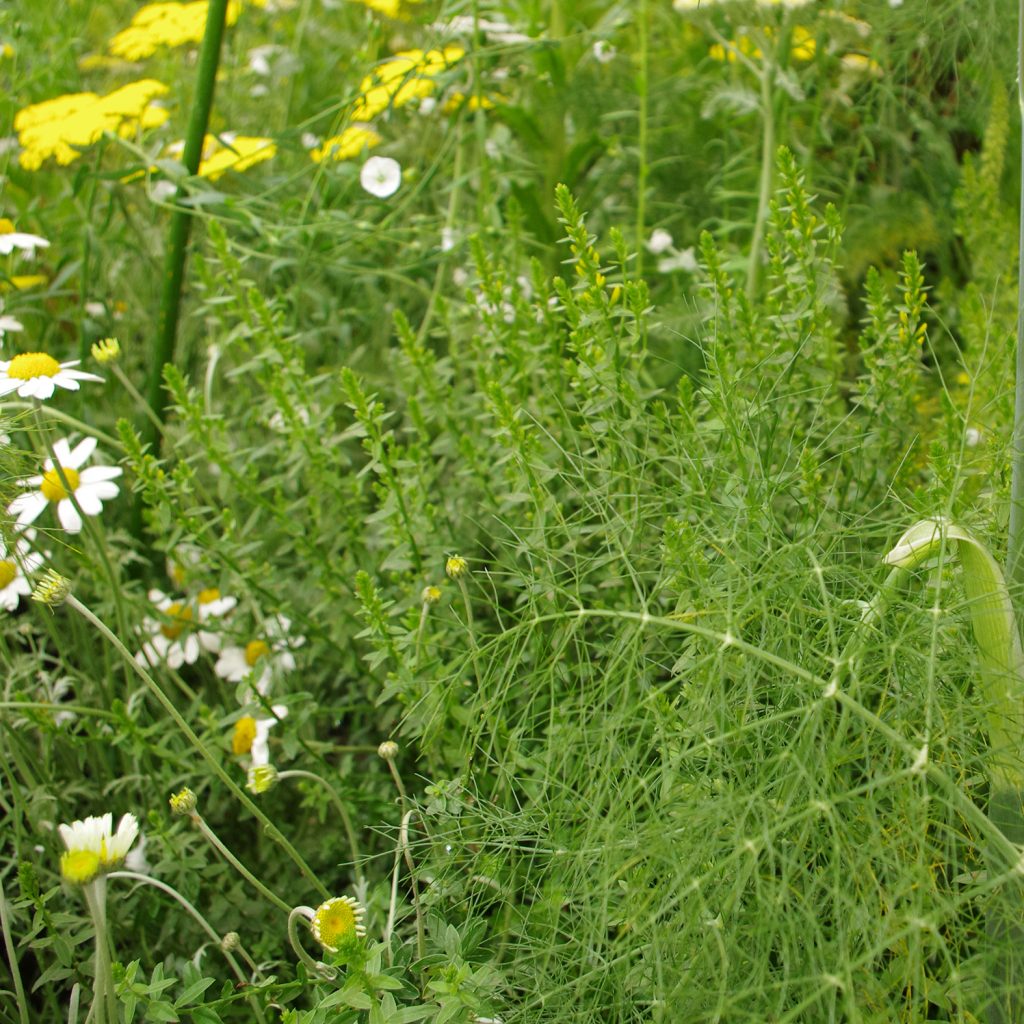 Another excellent dye plant Dyer’s Broom aka Dyer’s Greenweed (Genista tinctoria) sadly fading into the general green foliage because it was not yet in flower.

I know from our own dye garden that almost no dye plants were in flower at the time of the show. Our Woad had virtually finished and the Weld, Chamomile, Dyer’s Coreopsis, African and French Marigolds, Cosmos, Madder, Saw-Wort, Japanese Indigo and numerous other dye plants were either just a couple of weeks away from flowering or months away. Frankly, I was surprised and impressed to see the presence of flowering Weld and Dyer’s Woodruff despite the growers not having access to the facilities to induce flowering artificially. 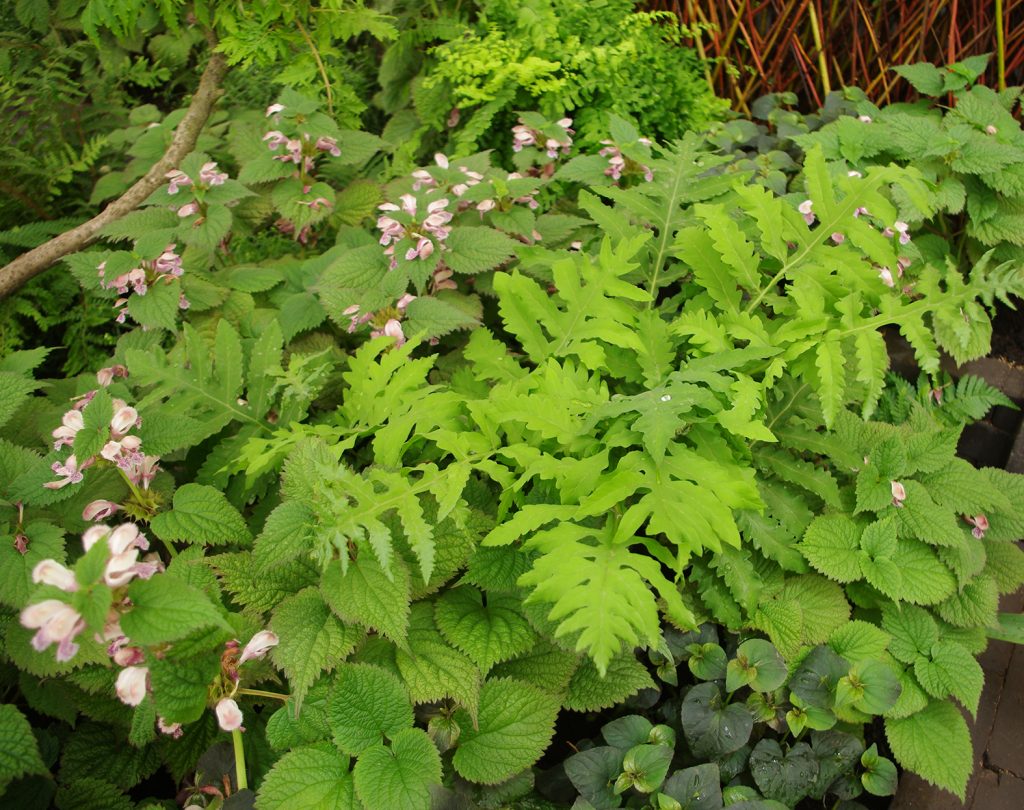 These plants were not listed in the leaflet which accompanied The Textile Garden and I think they were being used as foliage fillers and to add a bit of diversity and “wildness” to the general appearance. 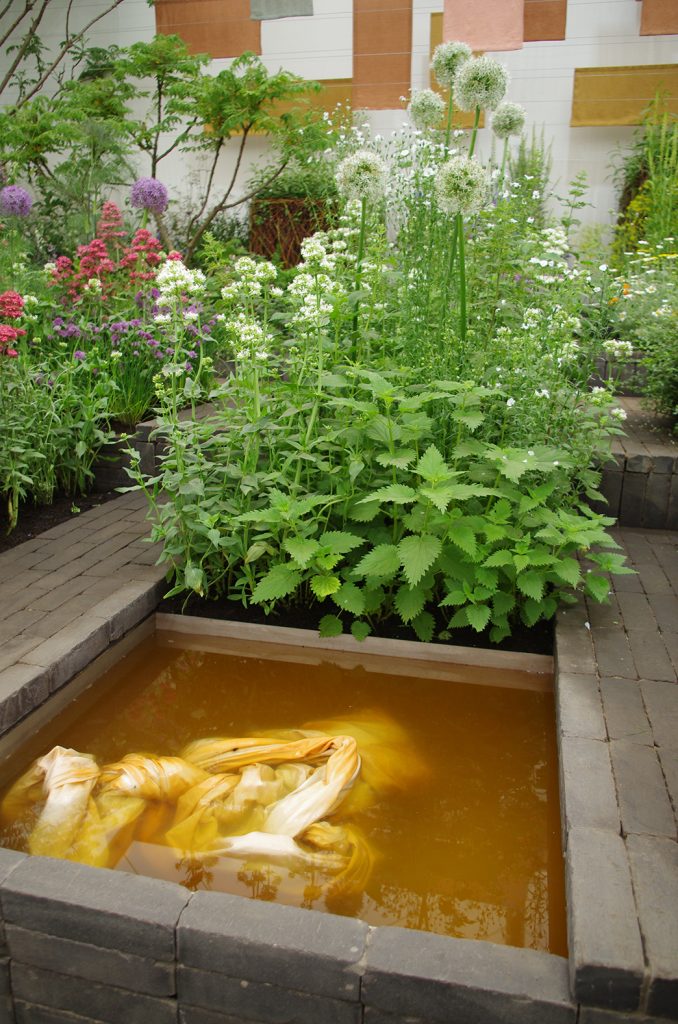 Nettles growing beside the yellow dye pool. I never expected to see so many nettles at the Chelsea Flower show but the Textile Garden was one of several that featured this useful fibre plant. 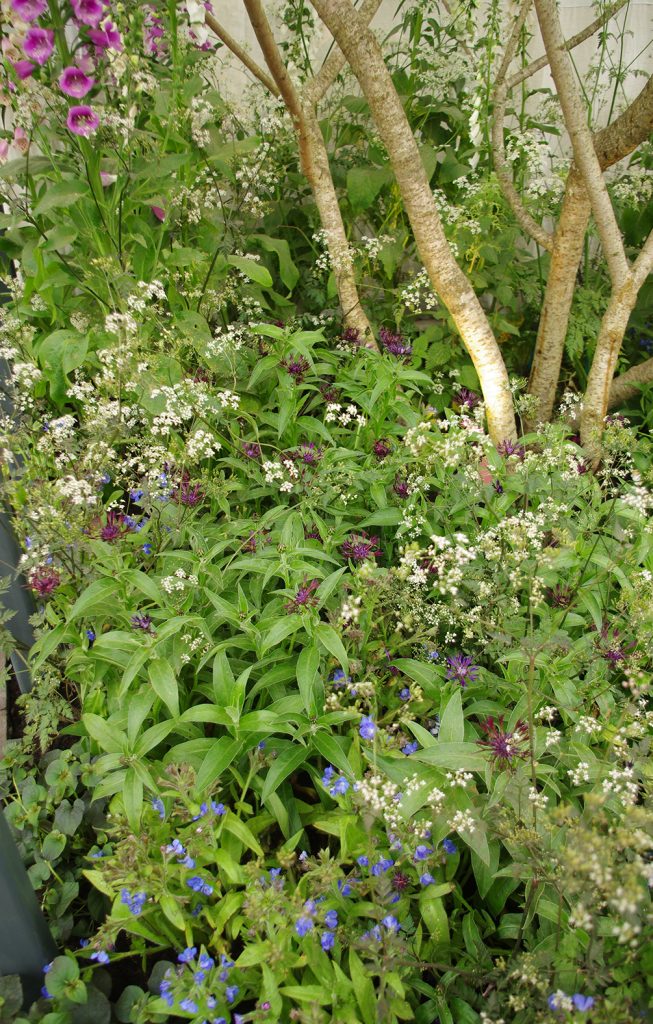 A lovely planting of Cow Parsley and Centaurea species and Bugloss (Anchusa azurea) which created more of the fashionable re-wilding look. The Bugloss was included for its family connection to Dyer’s Alkanet (Alkanna tinctoria) which Lottie wanted to include but, like me, she could not find a source anywhere in the world. 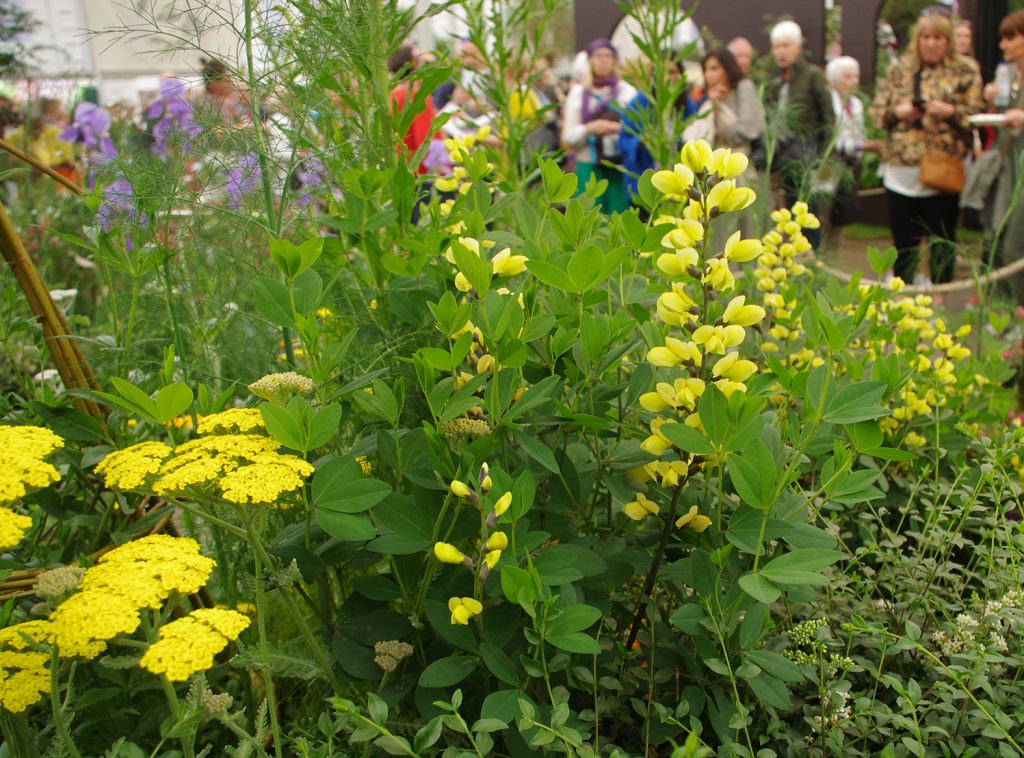 Yellow Baptisia “Lemon Meringue” (False indigo) and Yellow Yarrow. False Indigo does contain a tiny amount of indigo but I have never tested it. 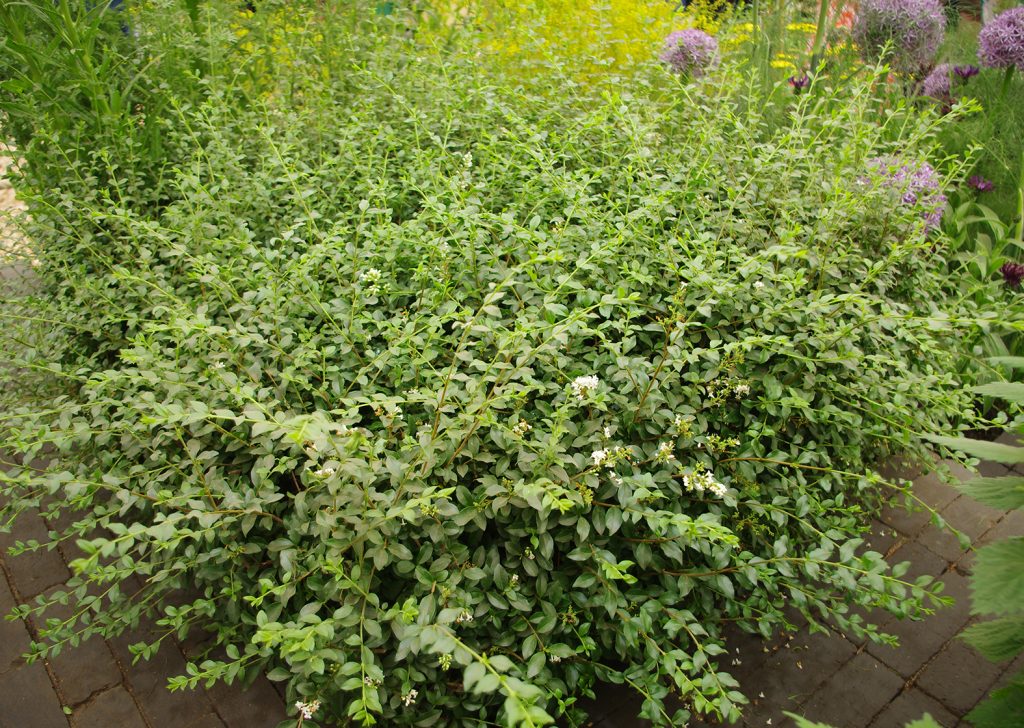 The Privet (Ligustrum delavayanum) was not a plant I would have used. A better hedging plant which gives a fantastic golden yellow dye would have been Purging Buckthorn (Rhamnus cathartica). Not as nice to look at as this Privet but can be shaped in the same way.

I’ve seen many negative comments about the Textile Garden planting: “a lost opportunity”, “should have been a simple matter to do the research”, “the choice of plants did not respect the knowledge of the professional natural dyer” and more. While I can only agree that many of the plants on show were not particularly good dye plants, I cannot agree that the designer was unaware of which plants are good dye plants. Quite the opposite in fact. When I challenged Lottie, she was perfectly knowledgeable about the plants and knew exactly when they all flowered.

One of the plants in the Textile Garden which rightly attracted particular controversy on social media is foxglove (Digitalis species) as all parts of the plant are highly poisonous. Therefore handling them in the process of making a dyebath could cause serious medical problems.  As a dyer I would definitely not recommended using them for dyeing. They are far better grown for their decorative and bee-friendly flowers.

As an experienced grower of dye plants, I had certain expectations of the Textile Garden and it’s clear that many other natural dyers did as well. Most serious plant dyers would have liked the Textile Garden to have drawn special attention to the very best dye plants that you can grow in the UK, with a central focus on the historical classics of Weld, Madder, Woad and Dyer’s Greenweed. It is possible this could have been done, but not in the format required by the Chelsea Flower Show at this time of year without expensive horticultural tricks. On the day I attended there were many tens of thousands of people crowded into the large show site. At times I could hardly move or see the show gardens properly. There was little or no opportunity to show off rather average looking plants (which weren’t even in flower) to their full potential. So the display absolutely had to be highly eye-catching. Lottie was forced to cast her net rather more widely to include borderline dye plants that at least showed a bit of colour. The Weld plants were a real star of the garden and I would have liked to see more of them, but anyone who has tried to grow Weld will know of its contrariness and how it hates being moved. Dyer’s Woodruff was used as edging for many of the beds but possibly had not had enough time to recover its delicate shape and was looking a bit scruffy. 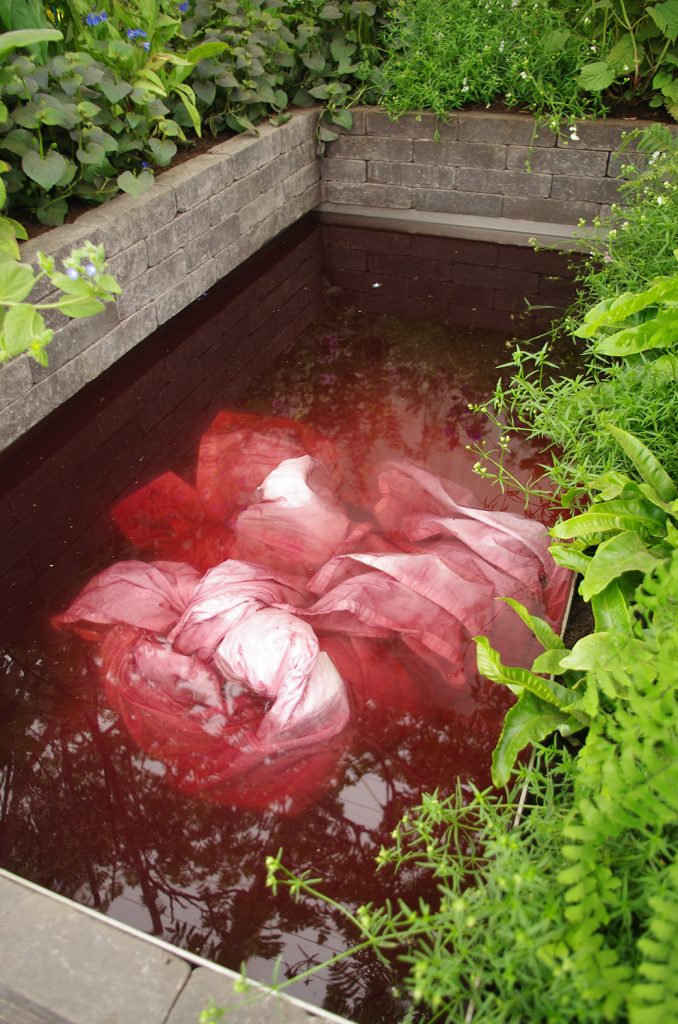 The red pool with the delicate foliage and tiny white flowers of Dyer’s Woodruff (Asperula tinctoria) trailing over the edge. This plant gives red from the roots.

To connect the plants with dyeing, Lottie designed garden dye pools, complete with fabric. Actually this was quite inspired because it immediately showed the connection in a way that would have been very difficult otherwise. The dust in the pavilion thrown up by ‘the masses’ walking on bare soil paths and by the London Plane tree pollen meant the pools were not as crystal clear as they could have been. I note that most other garden designers had included movement in their water features so avoiding this problem.

The other design feature to link the garden with textiles was the chequered grid layout of the beds, based on a woven pattern. This did not work so well as the pools, in my opinion, since the public could not clearly discern their pattern from behind the barrier. I don’t think this really mattered though, as the overall impression was strong and the aesthetic appearance very pleasing. The textile link was enhanced by the fabric installation suspended above the back of the garden. This was made up of a matrix of plant dyed pieces of linen cloth, created by Kate Turnbull and her students at Headington School. 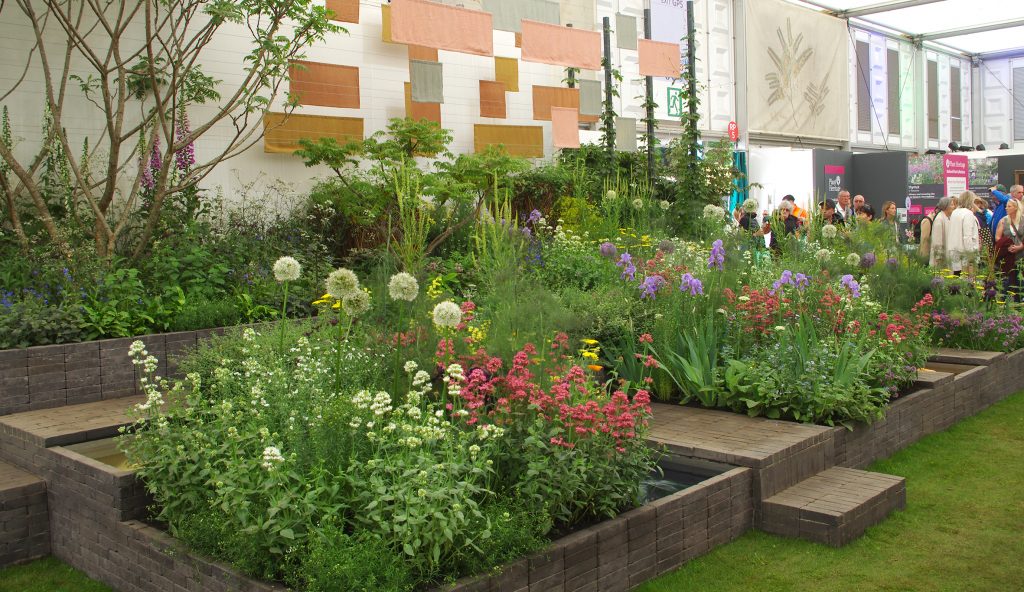 A long view of the garden with dyed fabric display at the back.

From looking at the other gardens on show, I think I can say that only the Rewilding, the Urban Forage and the Mind gardens achieved a design perfectly wedded to function.

So what was the function of this garden? Fashion Revolution is a global campaigning organisation and one of its objectives is to raise awareness of the harmful use of synthetic fibres and chemicals in the fashion industry and promote sustainable, healthier textile production. The purpose of the garden was to try and reconnect the public with the environment and show that the clothes we wear have an impact on the natural world and the way we live our lives. Their stated goal was to sow the seed of curiosity. Did the garden achieve this? Yes I think so. Hundreds of people showed an interest while I was there, many of them had clearly never considered the human and environmental impact of the clothes they wear.

I have not mentioned all of the plants in the Textile Garden but there were many excellent dye plants represented, you simply couldn’t see them easily. The plants chosen mainly for having showy flowers, although a distraction from the excellent dye plants, were necessary to attract attention to the garden as a whole. This is sadly a consequence of the circus performance which is Chelsea. We thank  Nicky Mehdi for recommending an enlightening episode of Sarah Wilson’s great Roots and All podcast on the problems with these huge flower shows. 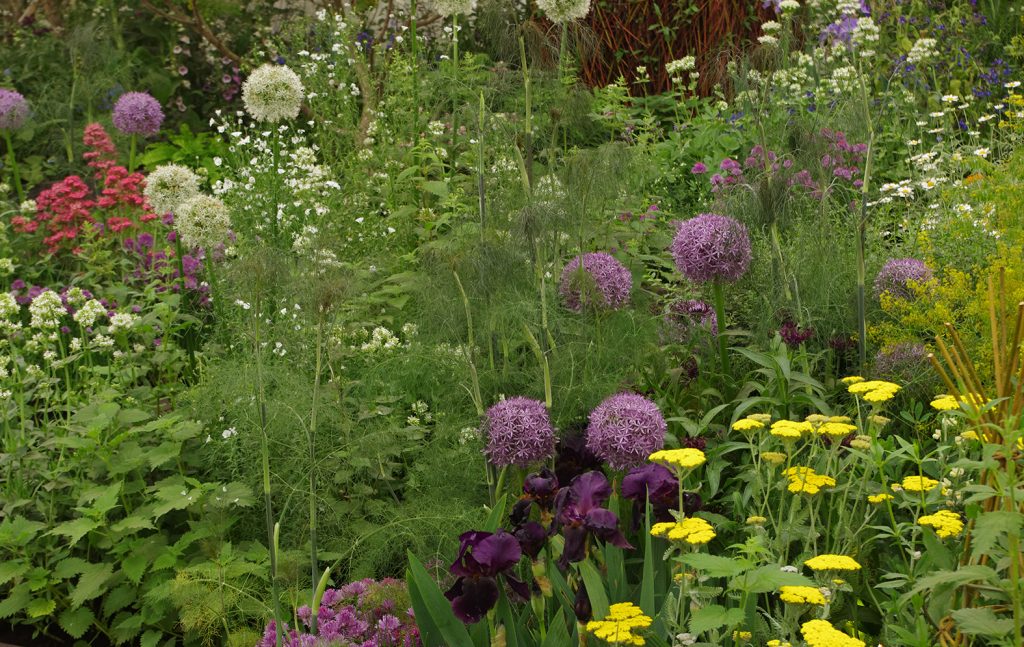 Another bed of the Textile garden featuring Alliums and yellow Yarrow.