Currently the main method of indigo extraction in use on internet Facebook pages is the 2 -3 day long soak in water. I believe this was the main method used commercially in the days before synthetic indigo wiped out the western market for natural indigo. Originally used to extract indigo from Indigofera tinctoria it is still used for small scale production in South Asia. The method is now used for Japanese indigo presumably because the traditional Japanese Method of composting the leaves is too large scale and time consuming for craft dyers. So it has been with some bafflement that I’ve seen the rise of this soaking method as I have always followed the Jenny Dean method which is even quicker.

We were introduced to plant dyeing through the pages of Jenny Dean’s “Wild Colour” and have used her recipe from this book for many years. It involves heating the leaves and can be done in two hours. Since we started to use this recipe we have tweaked it somewhat, discovering that there is no need to heat the leaves over 75 to 80°C to get maximum extraction. Another wrinkle is the need to allow the heated leaves to cool fairly rapidly. Large containers holding 20+ litres tend to cool too slowly and the indigo can be damaged. We did try one experiment when we cooled the extraction bath artificially but that was too quick and the results were very poor. An ideal extraction would be to heat about 1kg of leaves in 5 to 10 litres of water to 75°C and allow it to cool naturally over an hour. In our climate it will fall to around 40°C or less during that time.

So, now to the experiment which was a bit slap dash, but I am sure that it was systematic enough to have fairly good validity for a home dyer.

I picked just over 2kg of fresh Japanese Indigo of the Long Leaf variety which was showing no signs of any flower buds. This was divided into 2 lots of 1026g. 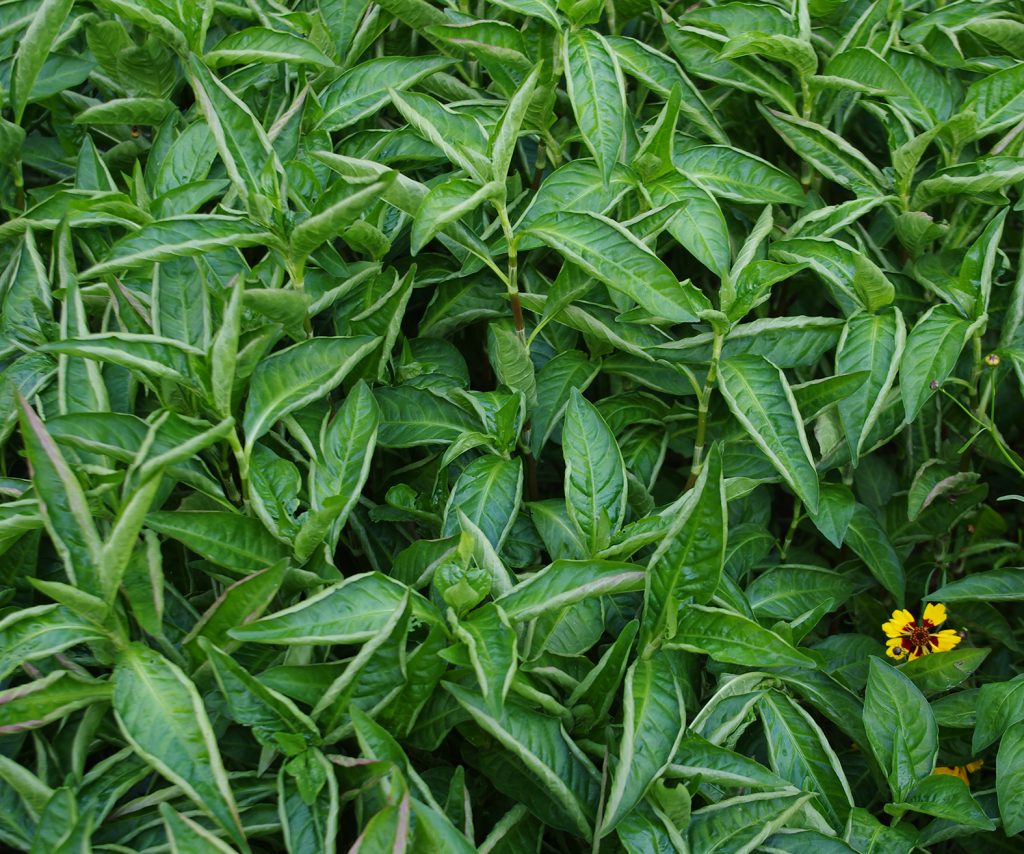 Once batch of leaves was added to a large pan with about 8 litres of cold tap water (20°C) and then gradually heated with constant stirring to 75°C. This took exactly one hour and at the end the leaves had lost all of their fresh green tint and had turned almost black. The water was a very dark grey (a lot darker than usual in fact and I attribute this to a higher than normal amount of indigo in the leaf – a result of the weeks and weeks of hot sunny weather we have had this summer).

The leaves were then left to soak for one more hour, after which there was an indigo bloom at the surface and the water had darkened further. The leaves were removed (by straining through old tights) and 4 tablespoons of household ammonia were added with an immediate colour change to dark yellow/green. The liquid was then oxygenated by pouring from bucket to bucket about 20 times during which the liquid darkened to a green black. A small quantity of the liquid (viewed from above in a white plastic cup) looked olive green. 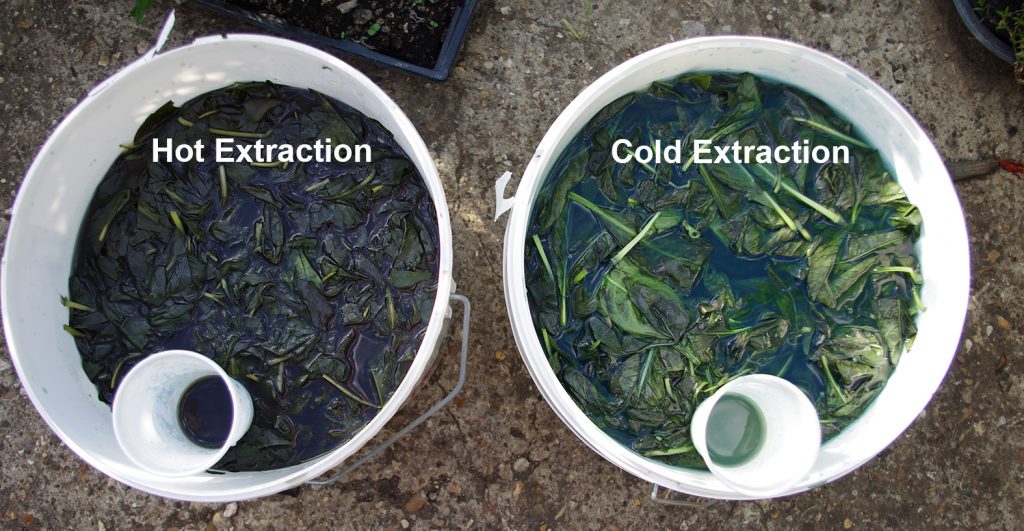 Comparison of Hot and cold indigo extraction after 1 hour of soaking but before straining.

The second batch of leaves was placed in a plastic bucket filled with about 8 litres of hot tap water (57°C). I used hot water because I did not wish to wait more than 24 hours. At this temperature the leaves become slightly cooked and release cell contents into the water quicker. The bucket was then set aside for 24 hours. After 1 hour the temperature had fallen to 44°C, the leaves were still quite green and the liquid was much paler and bluer than the hot extraction at the same stage. See image above.

After 24 hours the leaves were still greenish, although they had darkened somewhat. There was a lot of indigo scum on the top leaves. The liquid was grey with a blue tint. The plastic bucket was stained blue. Generally the results so far looked good, with much more blue visible than in the Jenny Dean method. 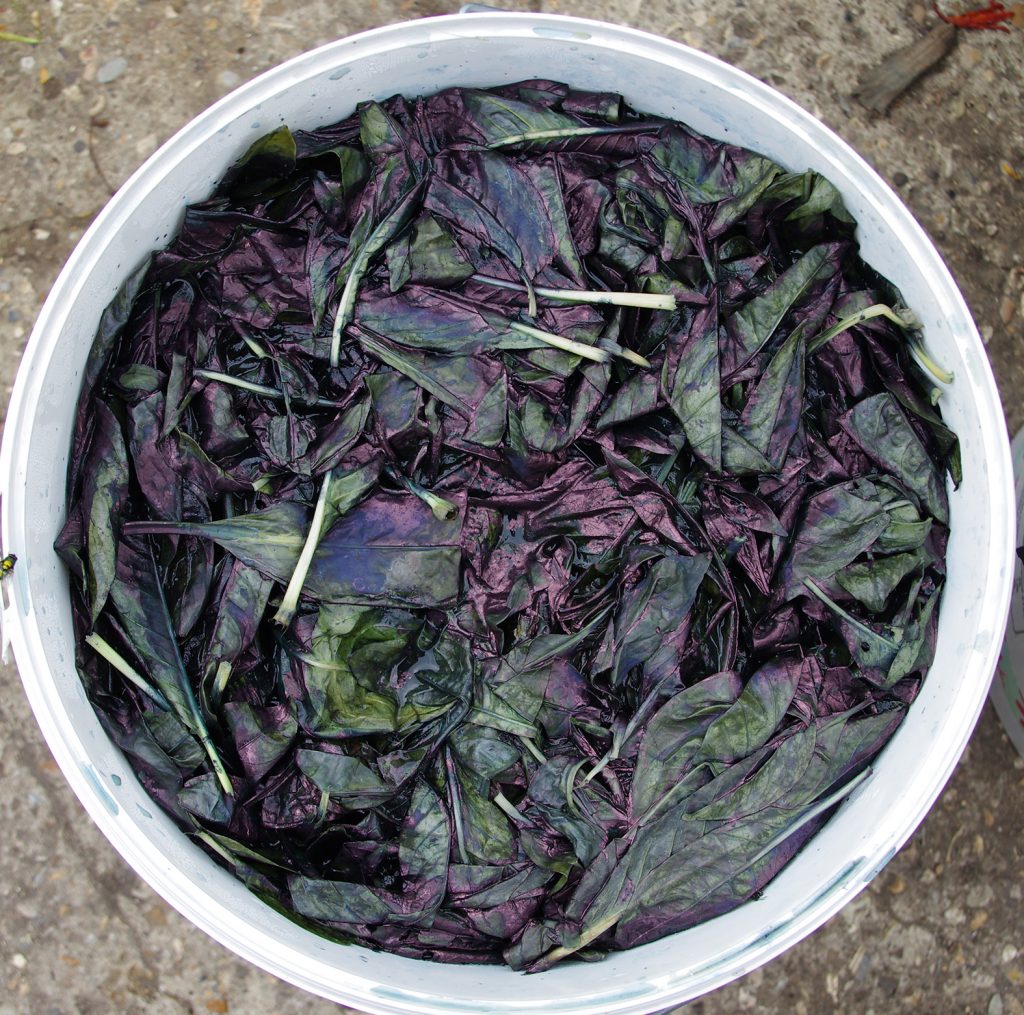 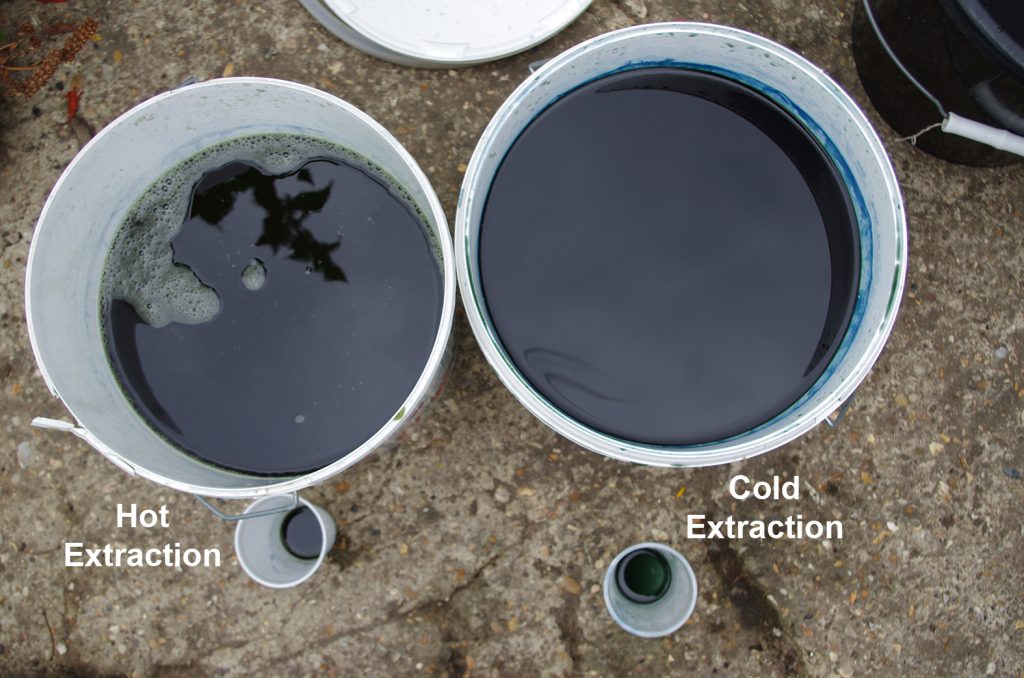 After leaves are removed, alkali (ammonia) added and liquid aerated.

Comparison of colour of water after extraction. 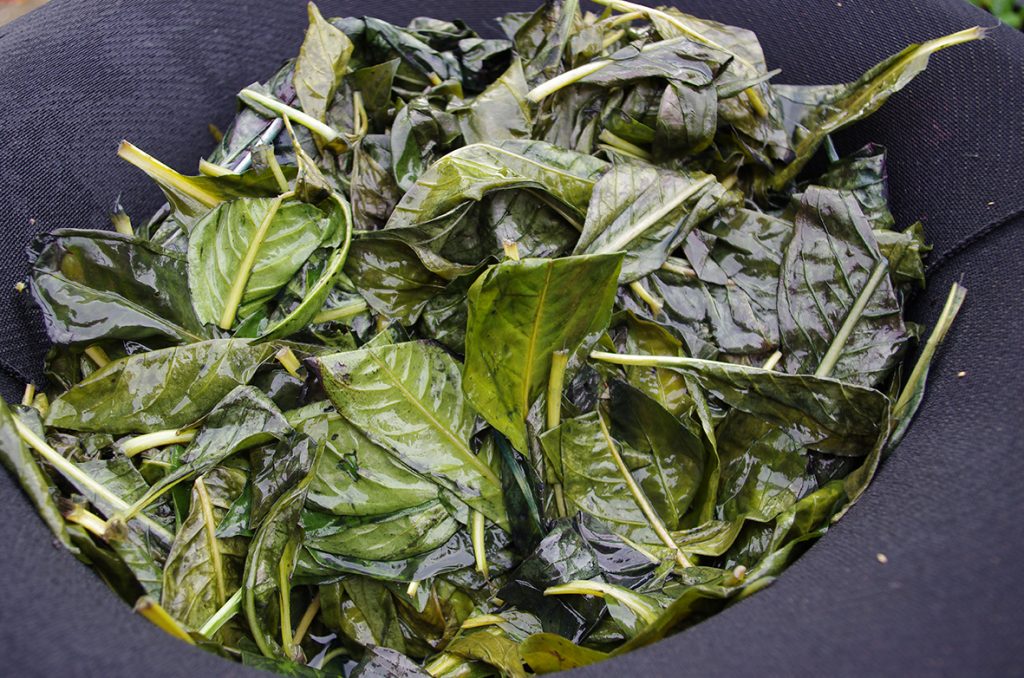 Colour of leaves after cold soak for 24 hours. 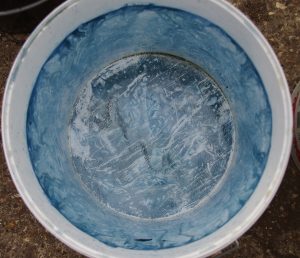 The leaves were removed and about 4 tablespoons of household ammonia were added and the colour immediately changed to yellow green. The liquid was then oxygenated, by pouring back and forth between buckets about 20 times. During this process the liquid darkened until it was nearly black. A small quantity looked blue/green.

Both extracts were then heated at the same time in separate pans to 50°C, the ideal temperature for dyeing wool, and spectralite reducing agent (thiourea dioxide, thiox) was added (one and a half teaspoons) to each pan. They were then left for about 2 hours to give ample time for the indigo to be reduced. The pots were then reheated to 50°C and an identical skein of wool (Corriedale) was added to each. Both pots were then gently stirred to promote even dyeing and the skeins were removed after 20 minutes.

Initially the colour of the skein from the Jenny Dean (hot) method looked darker but on drying no difference could be detected.

I should clarify I don’t use lime (as a combined alkali and flocculating agent) to obtain a dried indigo pigment from my dyeplants. Any indigo I don’t use straightaway for dyeing, I store as liquid sludges. But I can see that for people who do use lime, the cold soak is advantageous because the resulting indigo pigment would contain fewer impurities than the hot soak because the liquid extract after straining is purer. For myself I’m quite happy to continue using my modified Jenny Dean process as it is fast and reliable. 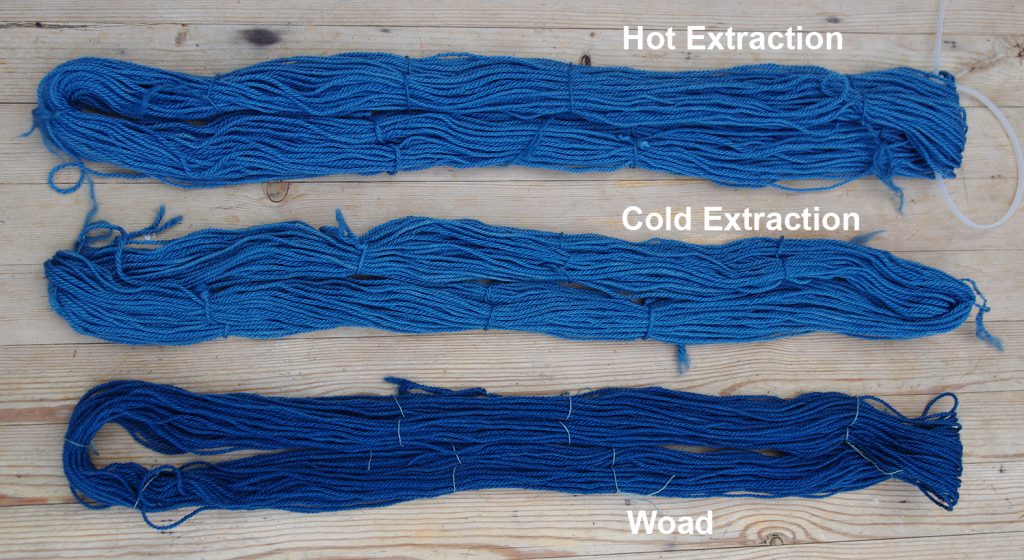 Comparison of strength of indigo extracted from Long Leaf  Japanese Indigo and Woad.

A note on alkalis

There has been a lot of controversy about which alkalis produce the best results. I have tried most of them and found that what is important is the pH not the exact chemical used to get there. Washing soda is the weakest and produces very poor results. Household ammonia is excellent and relatively safe, provided you don’t get it on your skin or breathe it in. Calcium hydroxide (lime) is good and has the added benefit of soaking up the indigo precipitate and settling it to the bottom fast (flocculation). Sodium hydroxide is also good but is very corrosive – a danger to skin and textile.
Whenever using strong alkalis you must take safety precautions: wear gloves; avoid splashes; don’t ever add water to dry alkaline powders or granules, add the powder to water; label colourless solutions and store safely; never leave sodium hydroxide solutions unattended for curious animals or children to explore (it is colourless and odourless and very corrosive indeed).