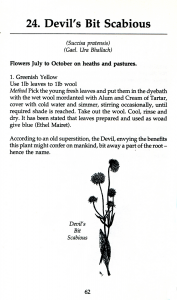 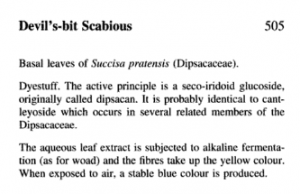 Some years ago I came upon a reference to this bee-friendly and pretty blue flower being a potential source of blue dye in Jean Fraser’s book “Traditional Scottish Dyes and how to make them”. Jean attributed her information source to Ethel Mairet. In her 1916 “Book on Vegetable dyes” Ethel briefly mentioned that Devil’s Bit Scabious leaves, if treated like Woad, will give a blue colour but adds no further details. A quick internet search brought up a number of other references to this plant producing either a blue or green dye. Significantly an entry in “Chemical Dictionary of Economic Plants” (2001) edited by Jeffrey B. Harborne, and Herbert Baxter, states that fibres placed in an alkaline fermentation bath of the leaves will turn blue on exposure with the air, though the active chemical is not identified as indigo. Devil’s Bit Scabious (Succisa pratensis) a member of the honeysuckle family (Caprifoliaceae) and a related plant is Teasel (Dipsacus), which in turn is also mentioned as a source of blue dye – being apparently produced by dried flower heads.

At the time I was looking out for possible dye plants that had flowers that weren’t yellow, as this would make our dye garden a little more attractive to the eye. I am also a beekeeper and Devil’s Bit Scabious was being promoted as one of the most pollinator-friendly native flowers, so I set about obtaining some seed. I was disappointed however to find that although you can buy the seed it has very poor viability. My first attempt resulted in no germinations and the second attempt only produced 5 plants out of around 500 seeds. In the end I bought some plants from the Rosy Bee plant nursery and planted them in the dye garden where they have positively thrived. Finally (3 years later) I had enough plant material to try extracting the blue dye. 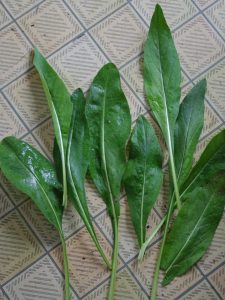 Basal leaves of Devil’s Bit Scabious which bear close resemblance in both size, colour and shape to Woad leaves.

All references to the extraction process say that the basal leaves should be used and that they should be treated just like Woad i.e. placed in an alkaline fermentation bath (possibly the urine bath). I was not happy about using urine, so instead opted for Jenny Dean’s recipe for hot extraction of indigo from Woad using ammonia as the alkali. In addition, I did a more conventional dye extraction by simmering the leaves for 1 hour and straining the liquor; then dyeing mordanted wool yarn in a heated dyebath with and without adding soda ash to raise the pH. Finally I set up a solar dyeing jar with leaves, wool yarn and some soda ash to make the liquid alkaline and set it aside in a warm place to ferment.

After pouring boiling water over the leaves and leaving for an hour and straining, I obtained a pale yellow liquid. 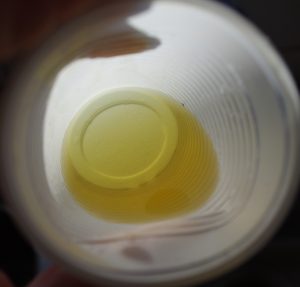 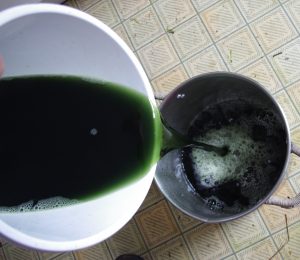 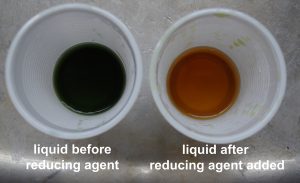 Colour change after adding Thiourea Dioxide to the green liquid.

There was no sign of any free indigo nor the characteristic sherry colour from Woad. The next stage, adding the alkali and aerating was exciting because the liquid quickly went a lovely dark green, exactly as one might expect if there was indigo in there. I had my hopes up now for the first time! The next stage was to add a reducing agent and for speed I used a tiny amount of Thiox (Thiourea Dioxide). The colour of the liquid immediately changed to an orangey yellow – too fast for the normal indigo process.

But I put in some un-mordanted wool yarn anyway and waited. I took the yarn out but obtained no discernible change in colour at all. Disappointment! I did several dips and left the yarn in for about 15 minutes, then did more dips, but sadly there was no colour change.

After drying, the wool does look slightly altered but it’s a bit of a stretch of the imagination to see any blue.

Later, I took some of the original green coloured liquid which had the alkali added and neutralized it with some distilled vinegar. The colour instantly changed back to yellow, indicating pretty conclusively that there was no indigo in it. 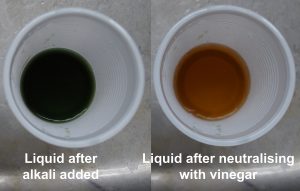 lowering the pH of the green liquid with vinegar brings it back to an orange yellow. 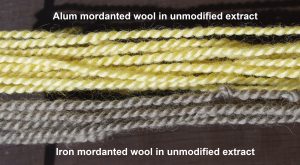 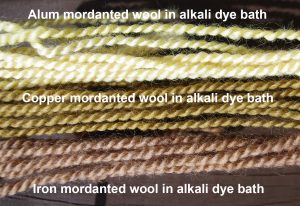 After adding the soda ash, the liquid darkened off as expected to a greeny yellow though not as green as when using ammonia. Wool samples mordanted with alum, iron and copper were introduced and, after rinsing in clean water, produced a similar set of colours after about ½ an hour. At this point I decided to leave the samples in overnight. In the morning the alum mordanted sample was much the same but the iron mordanted sample had turned from grey to a warm brown. The copper mordanted wool was an attractive greenish bronze. Depth of colour had not increased during the night. Rinsing the yarn removed the green tint of the dye bath.

The acute sensitivity to pH tells me that the chemicals producing the green colour in the alkali extract are not dyes and will not even attach to mordanted wool. The grey and light brown colours obtained with mordanted wool suggests that there are natural tannins in the leaves and also a yellow dye. The entry in the “Chemical Dictionary of Economic Plants” says the active dye chemical is a seco-iridoid glucoside. Internet searches suggest that these molecules protect the plant from predators and pathogens and are of interest for their anti-oxidant, anti-inflammatory and possible anti-cancer properties. I did find a reference to an iridoid called genipin which in a weak acid is reported to produce a soluble blue pigment in the presence of oxygen with potential as a food colourant. But to obtain this blue pigment seems to require a chemical laboratory! And there appears to be no logical chemical link to the indigo molecule.

I speculate that the mythical blue colour is one of those confusions that get passed from one source to another without anyone really testing it out. If by some miracle there is a blue dye to be had it is not indigo. Possibly someone at some point mistakenly put Woad leaves into a bath of Devil’s Bit Scabious, they are remarkably similar in shape and size. Or perhaps someone just assumed that since the blue/green was obtained in an alkaline bath identical to a Woad leaf extraction bath then they must be the same dyes. 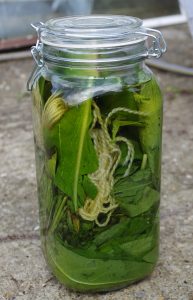 Hopefully this solar dye jar experiment is about as close as I can get to the original assertion that Devil’s Bit Scabious fermented in an alkaline liquid will give blue.

The results of the solar dye experiment will take some time. I think it is unlikely there will be any blue or green but we will see.

One further thought, there could be a bit of a pattern developing here, searching for a blue from Elecampane root (see blog post) I discovered a rather nice grey could be obtained. Here again I get another grey. Perhaps this is more evidence that the colour grey was often referred to as blue in earlier days.

Well, I’m keeping the Devil’s Bit Scabious in the Dye garden. It really is a fantastic pollinator-friendly plant and it looks good too.

For a further addition to this story please look at Leena Riihelä’s blog post on the subject where Leena has a recipe for getting green written by the famous botanist Carl Linnæus.