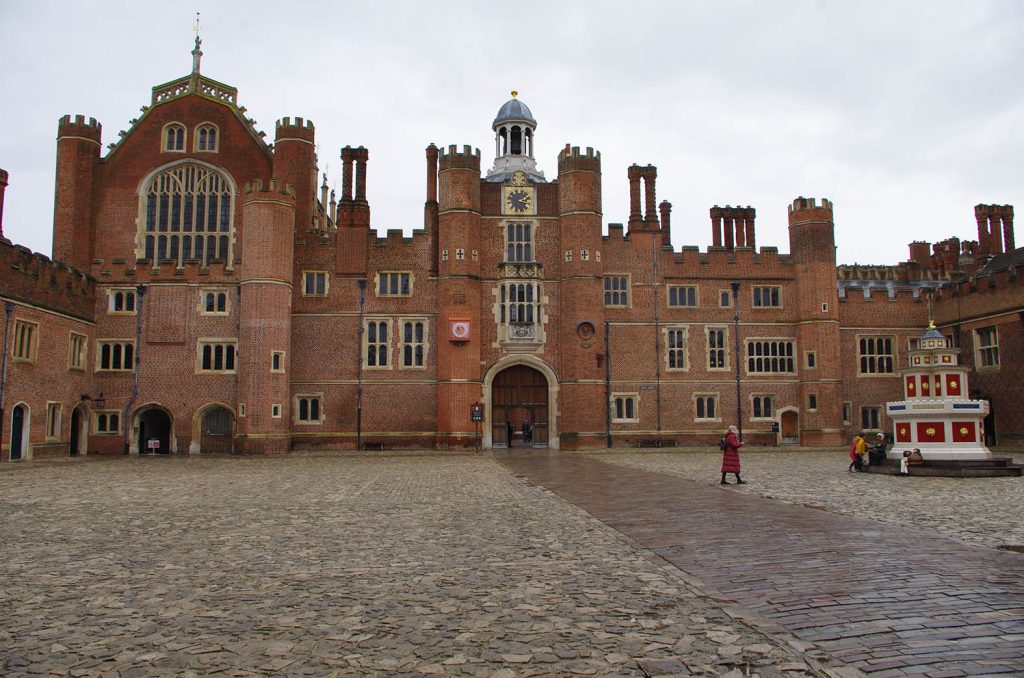 We saw the social media posts about this 400 year+ old textile and noted the brightness of the green embroidery silks. Unusual we thought. The longest lasting green dyes are combinations of a yellow dye with indigo. Indigo we know can last for many centuries but what was the yellow dye? Most yellow and green natural dyes do not last long and old textiles end up in various shades of blue (from indigo), red (from madder or an insect dye) and brown from all the other dyes which have faded. 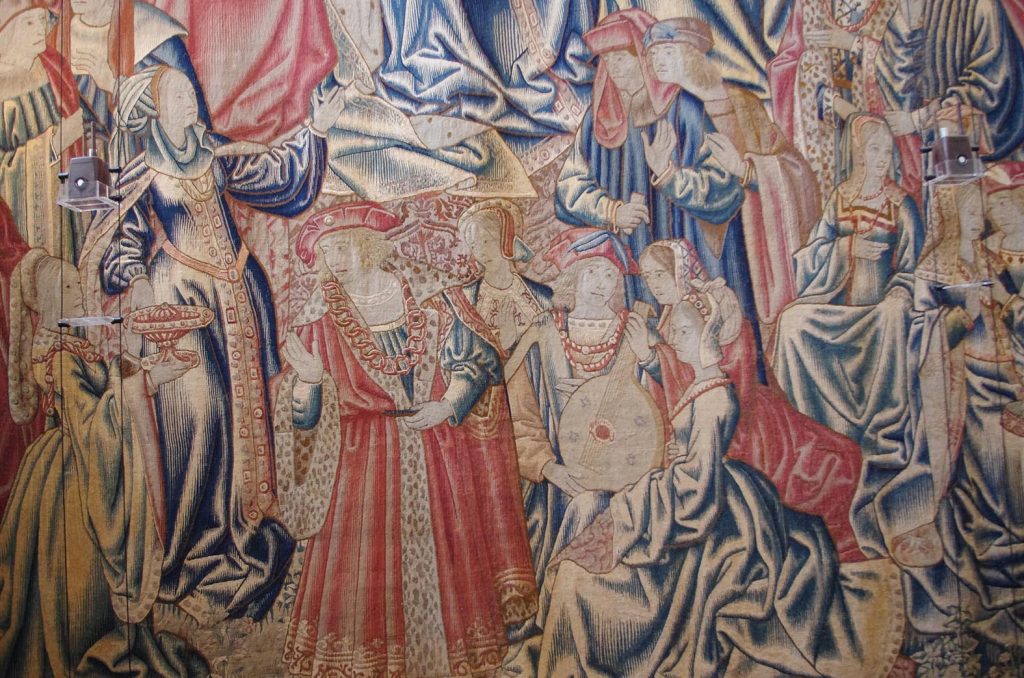 This is one of the many rich tapestries from Hampton Court Palace. Typical of tapestries of this age, only the blue and red dyes have survived.

We arranged with a friend to go and see the dress at Hampton Court Palace. Where colour is concerned you really need to see it with your own eyes. There were some disappointments on our way there, notably the cost of getting into the Palace – ouch! Then there was the ‘No photography’ policy and the general lack of information available on the textile’s construction. No souvenir leaflet or postcard to take away or purchase either. According to one red-coated guide, the owners of the textile (the local diocese of the Church of England) had insisted that no financial gain was allowed through merchandise. As it turned out the palace guides were not enforcing the No Photography policy in any way, so I was able to get some good pictures.

Unfortunately the reverse side of the fabric, which has the brightest colour, was not on show but the faded side was still quite colourful and the greens still discernible.

For a general history of the textile, look at the links at the bottom of this post. The articles are highly recommended. We were impressed by the skill and artistry of the original embroiderer. This master craftsperson had embroidered the entire design straight onto the cloth of silver. The plant based motifs may have been inspired by illustrations from a Herbal (a contemporary plant guide) but could also have come from other textiles of the period. Many of the plant motifs are entirely recognizable and have been worked with a fine outline and fill of very closely spaced “seed stitch”. At some point additional, embroideries were added to the dress but these are of much lesser quality and were, according to historians, done by Court noblewomen. This secondary work consists of various animals, many of which are insects. Caterpillars are particularly common. These animals, and the odd tree, were placed in the white areas between the plant motifs, seemingly at random. This lead to a rather chaotic appearance, which to my eye, spoiled the entire design. I would not be surprised if this “fault” had resulted in the fabric’s survival. Just picture the scene – Elizabeth is shown the reworked dress and notes its chaotic design. She smiles and says “thankyou ladies that’s just lovely”. Then as soon as they are gone she thinks “Oh, what can I do with it now, I can’t give it to anyone in court as it’s just too opulent, I know, I’ll send it away up north as a remembrance gift for my lady companion Blanche Parry. That way it will never be worn again”. That’s the beauty of history, you can fit any story you like to the facts. 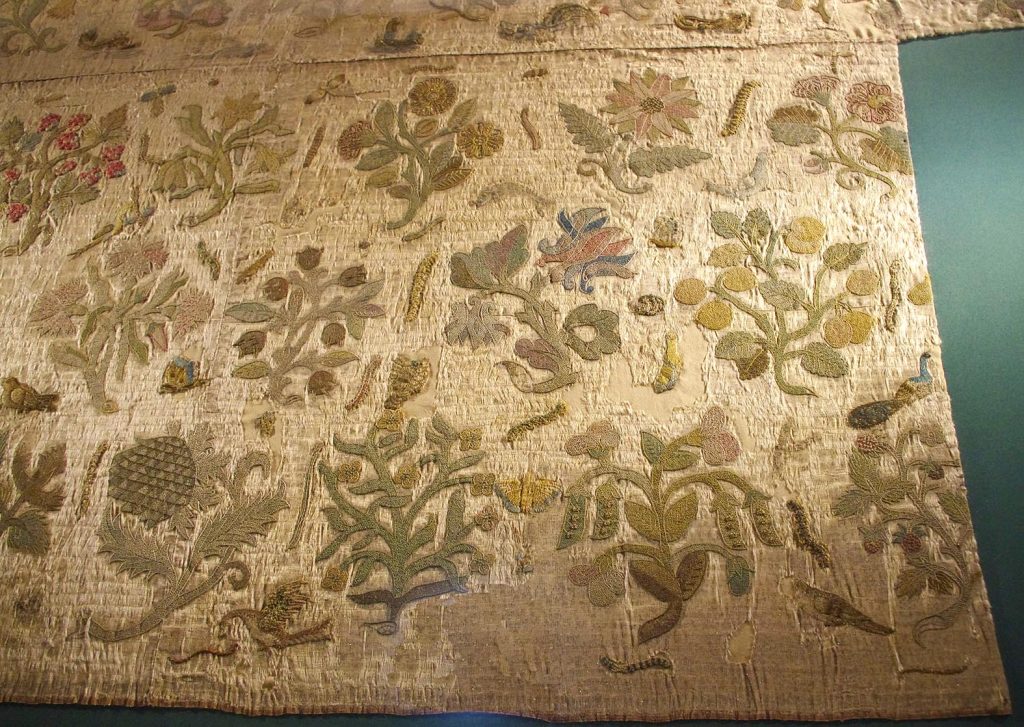 Detail of the Bacton Altar Cloth showing floral and animal motifs. The greens and yellows on this faded side of the textile retain some of their colour, probably the result of being kept out of direct sunlight in a church for 300+years. 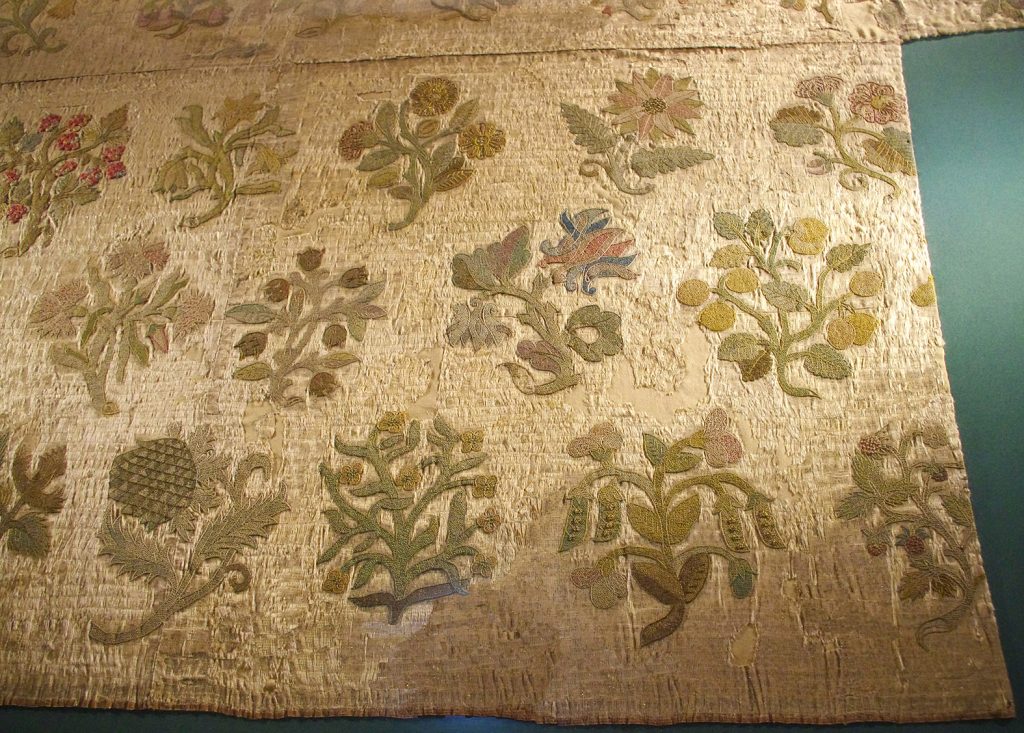 I have photoshopped this to show the textile as it might have appeared without the extra animal embroideries. 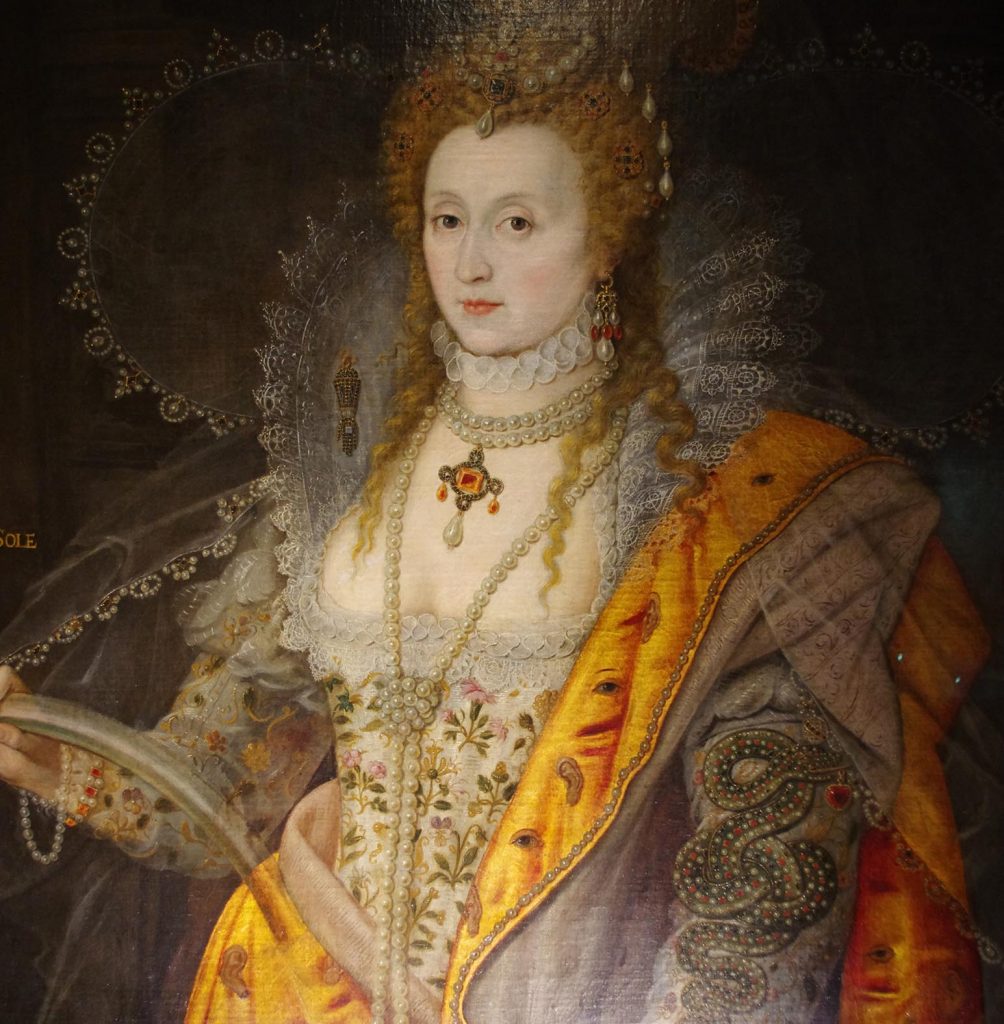 This highly symbolic portrait of Elizabeth shows her wearing a dress of similar design to the lost dress. 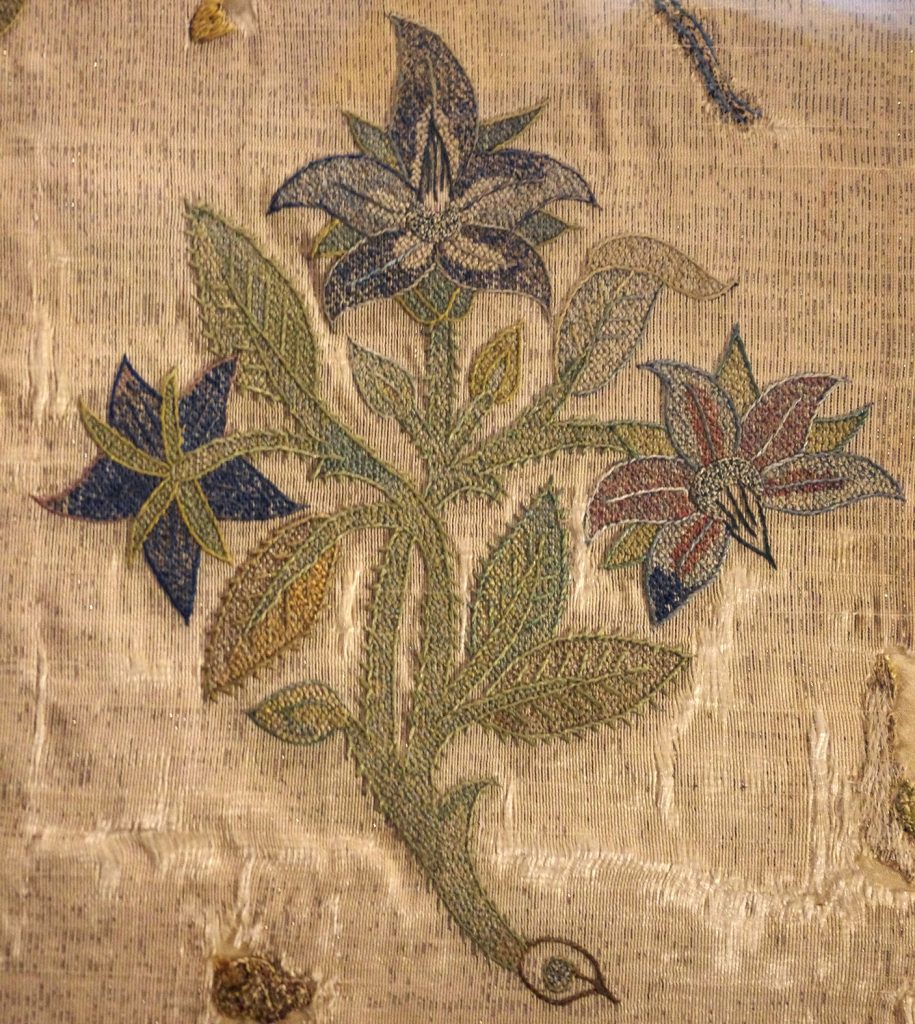 So, what about the dyes used in the dress? After searching the internet, the only dyes mentioned are cochineal from Mexico and indigo from the far east. This means the blue probably comes from from Indigofera. The silk cloth (Cloth of silver) itself was probably sourced in Italy, so it is likely that the dyed embroidery thread was also sourced from abroad, which opens up the dye possibilities enormously. I would not be surprised to learn that the master embroiderer was also European, rather than English.

I have enquired with the conservators at Hampton Court about the dyes used, but as yet I have not had a reply. However, I have been in contact with Natalie Walker (no relation) who has done some research on this textile and tells me the chief conservator at Hampton Court will be publishing a paper on the subject soon. If I find out any more I will update this blog with the results.

The visit to Hampton Court Palace was a timely reminder of what can happen when extreme wealth and power is held in the hands of a tiny group of people. Queen Elizabeth II is still the official owner of the Palace.

Note: All the photos in this post were taken by the author.

A Mark of Craftsmanship?