An article by Susan Dye and Ashley Walker
© copyright 2018

2018 is turning out to be our most successful yet.

The year began with our good friend Brian Bond joining us to deliver a two day workshop in Ipswich in late January with the International Felters Association (see above). Susan was involved in much mordanting in preparation. This was our second major plant dye workshop away from home, and dependent on friends or family to help us with transport. Hard work packing an ‘all singing all dancing’ workshop and the three of us into a single hatchback vehicle (albeit a large one, thanks Brian!). Quite stressful but very well worthwhile, as the students were terrifically motivated and created a full palette of wonderful colour on the finest merino tops.

Also in January we had confirmation that Southwark Cathedral had invited the London Guild of Weavers, Spinners and Dyers (WS&D) to demonstrate plant dyeing as part of London Craft Week in Mid-May. Susan was asked to coordinate the project, having held a successful mini natural dye demonstration there as part of the biennial London Guild exhibition last November.

In between scoping and planning the London Guild event at Southwark, Susan gave talks on plant dyeing to the Chelmsford Embroidery Guild, on the red dye from madder for the Cambridge Guild of Weavers, Spinners and Dyers and, closer to home, a talk on the horticulture of dye plants for the Wymondley Gardeners Group. Had the snow in early March not intervened there would have been another talk on the history of Norwich Dyers to region 7 of the Quilters Guild. 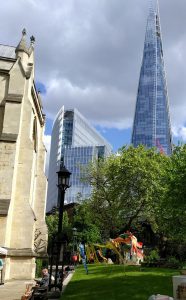 The Shard overshadows our colour splash at Southwark Cathedral

Susan spent much of April mordanting and test dyeing fabric and yarn for the London Craft Week event, which was to be held outdoors in the Churchyard in mid-May. Fortunately the weather improved and we were blessed with two sunny breezy days. With help from textiles graduate Hannah Sabberton, Susan and I carried Hitchin grown fresh woad and dry Weld, Indigo dye solution, mordanted fabric yarn and fleece, samples, display materials and goodness knows what else (kitchen sink comes to mind!) on the train and bus into Central London at rush hour. We are resourceful public transport travellers with trolleys and backpacks and all arrived safely! Mercifully all the pans and heaters had been supplied by London Guild members based not too far away (thanks to Penny and Diane). Also there were many, many lovely dyers from the Guild who shared the demonstrating. All told there were twenty two volunteers across the two days. We spoke to people from all over the world, from London and other parts of the UK. Tiring but very satisfying to see the rainbow of colours we achieved with just the three medieval ‘grant teint’ plant dyes: Madder, Weld and Woad.

Susan managed to escape a couple of times down to the British Library where she loves to do research on the history of dyeing and in particular the 19th Century “Norwich Red”. An article to be published in the Autumn issue of “The Journal of Weavers, Spinners and Dyers” will detail her findings so far. We have also been asked to write an article on growing dye plants with a particular emphasis on small gardens and container growing. This should appear in the next issue of “British Fibre Arts” along with a profile about ourselves. The Editor Rainy Williamson made us think about what we do and why we do it. I was particularly reminded that many people do not have access to a garden or allotment and may only be able to grow dye plants in small spaces. I immediately set about making and planting up some large-ish containers with suitable dye plants to see how they responded. And then we got to thinking that apart from a couple of small demonstrations and the regular workshops for our local guild we’ve never made an effort to share our skills in plant dyeing with the local population. So Susan quickly got on the phone and asked the Hitchin Festival organisers if they still had some slots left in their programme and lo and behold, (thank you Keith)  we were found a slot in the programme. 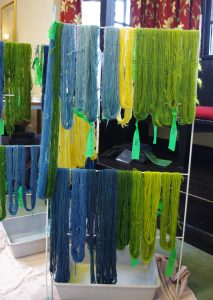 Meanwhile we had another workshop for our local Guild in North Herts to get ready for. This was based around an experiment investigating the notion that a better green is obtained if wool is dyed first with indigo and then weld (yellow) rather than the other way round as we have traditionally done it. Various accomplished plant dyers had reported this finding and we wanted to check it out. The workshop produced some fantastic greens and, somewhat to our surprise, the blue overdyed with yellow did indeed produce the best green.

While all this has been going on I’ve been working hard on the Natures Rainbow dye garden, getting it into shape to satisfy the North Herts District Council allotment inspector (Grounds Maintenance Monitoring Officer). Because we are growing a most unusual set of crops some of which look remarkably like weeds we 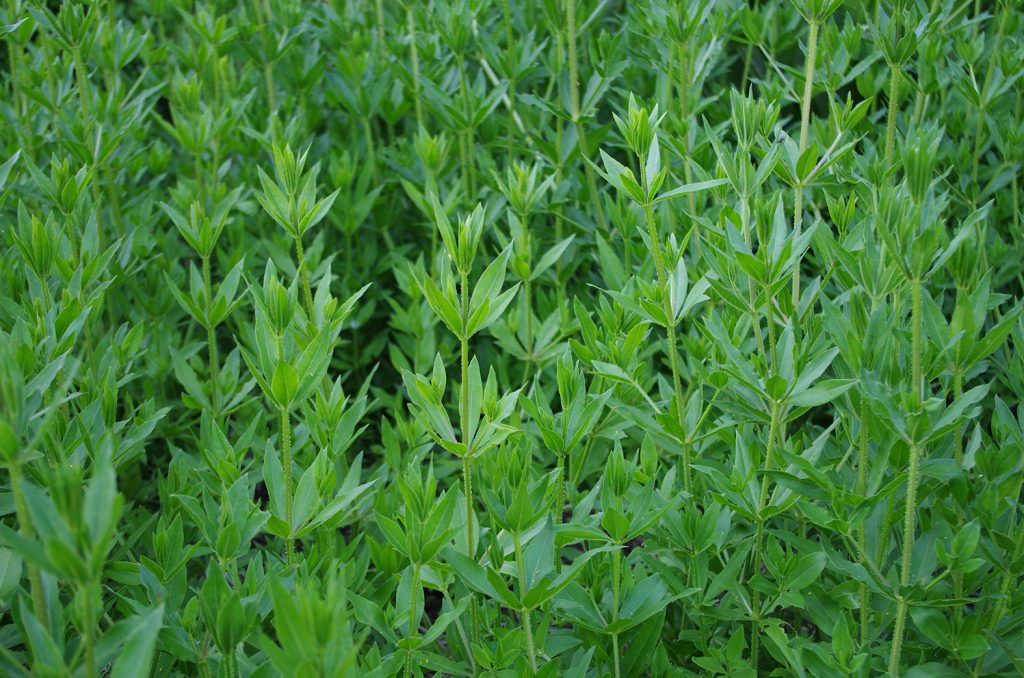 Madder is closely related to the weed Cleavers or Goosegrass. It looks and behaves much the same but is altogether larger in stalk and leaf and has berries instead of hard seeds. 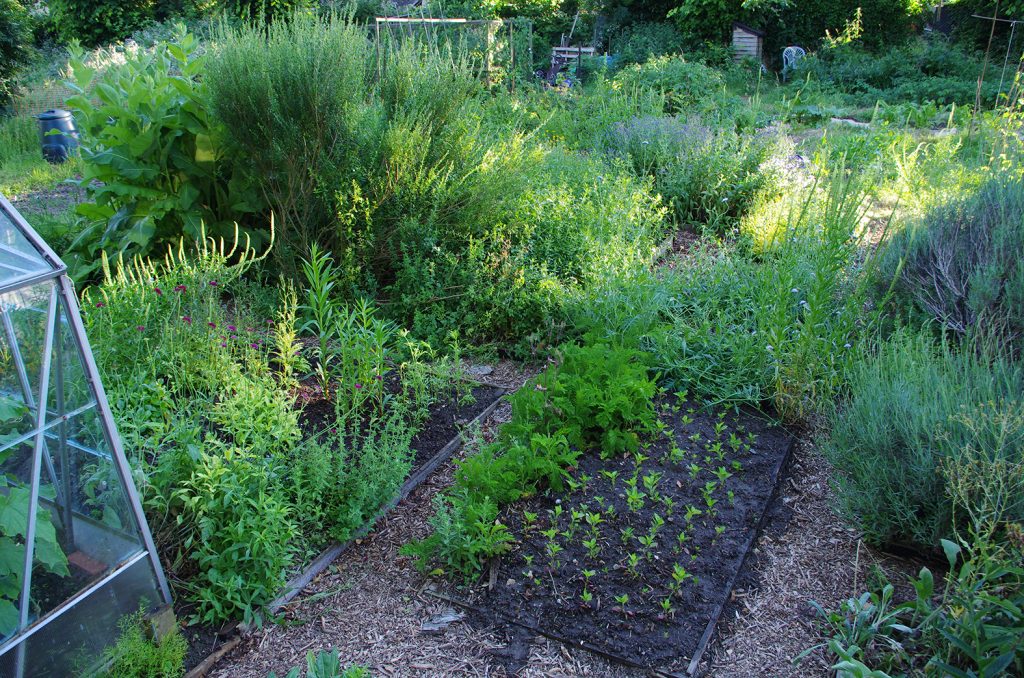 have to make the plot look as tidy as possible. Madder for example is a close relative of the weed Cleavers and has the same sprawling habit and Weld is generally classified as a weed anyway. In addition, we leave our second year Woad plants to go to seed, so we have stock for the following year and this too raises eyebrows. 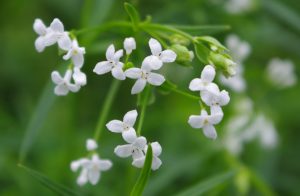 We also decided early on this year that if we are going to continue giving talks and writing articles about growing dye plants then we need to expand our experience and grow some of the more unusual dye plants so we sent off for more seeds including Chinese Woad, Wild Madder, Field Madder, Ladies Bedstraw, Blood Root and where we couldn’t get seeds we ordered plants. These include Dyers Woodruff, Black Oak, and Smooth Sumac (Rhus glabra). 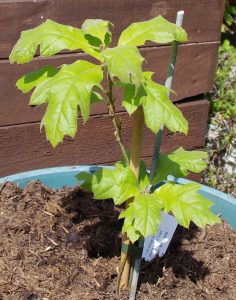 Our new Black or Quercitron Oak Sapling. The inner bark of this North American tree produces the dye quercitrin which for a while was a major industrial source of yellow dye. Of course it will be many years before we can harvest any bark from this specimen!). 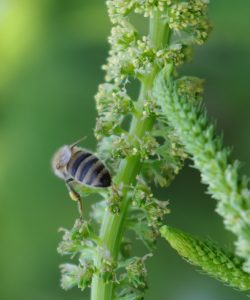 As a beekeeper I’m also very interested in growing plants that are also good for all kinds of bees so I’ve been very gratified that many of our dye plants are also fantastic bee plants too, Weld and Japanese indigo are two of the best. 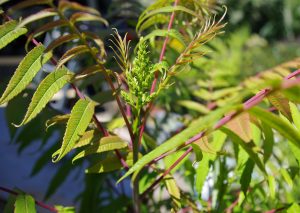 Smooth Sumac from North America, the dried leaves of which contain 25-27% by weight of tannins.

Look out for more blogs detailing some of the events mentioned here but you might have to wait until things calm down a bit before we get time to write them!

A limited stock of dyeplant seed is now available to purchase. Dismiss