This is a native of the UK and most of Europe with its range extending well into western Asia. One old name for the plant is Dyer’s Savory. There are a few sightings of the plant in New Jersey USA, the result of its introduction by settlers. It never ceases to amaze me how many dye plants were taken to America by the early settlers.

Modern changes in agricultural practice are responsible for Saw-wort no longer being a particulaly common plant. However, in the last few decades efforts in conservation have stopped its decline, but it is still endangered in some European Countries. 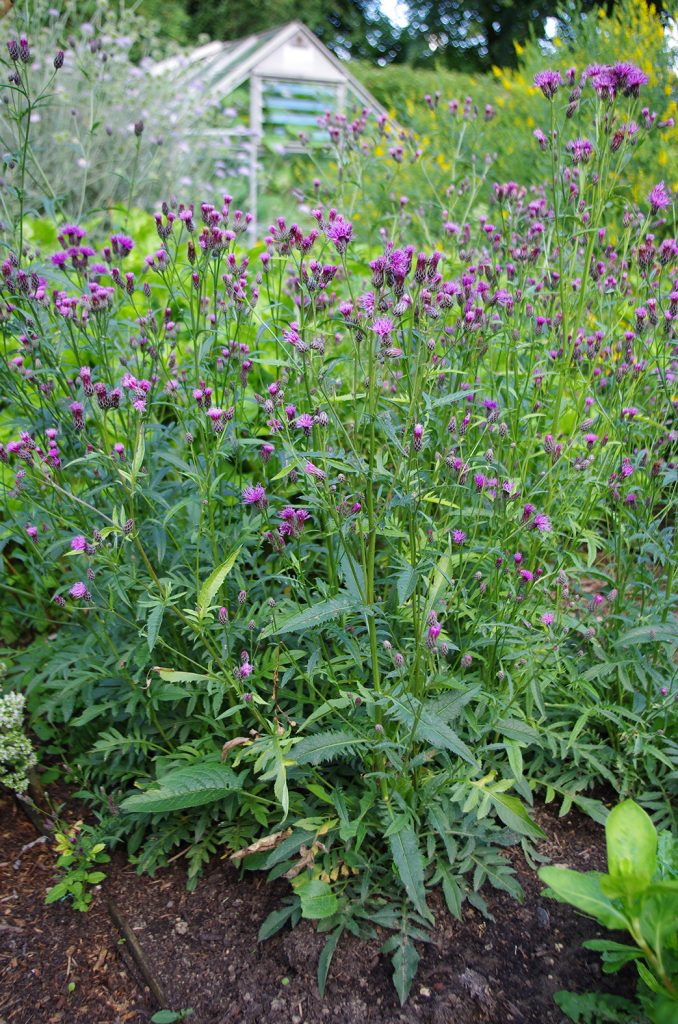 Serratula tinctoria is a long lived herbaceous perennial which when flowering grows to a height of around 50-70cm but can grow higher when in competition with other plants. It is a slow growing plant, mainly of grassland habitats. It prefers full sun, though it does tolerate partial shade. In general appearance it is easily mistaken for Lesser Knapweed but has a few highly distinguishing features, the most obvious being the fine serration of its leaves (after which the plant was named) and the distinctive “scales” of its flower bud. Saw-wort flowers in July to August. The flowers are purple and that’s one of the many reasons we like this plant. Many dye plants have yellow flowers so its nice to have a bit of contrast in the Dye garden.  Seed heads open in August to September.

Saw-wort has a number of genetic varieties or sub-species some of which can be obtained from plant nurseries. One popular variety, originating in Spain and Portugal, called Seoanei has a pinkish flower. Another is Macrocephala which has a different shaped flower head. In Britain there is a rare dwarf variety called Reducta which can only be found at some coastal sites.

Another unusual feature of Serratula tinctoria is the sex of the flowers. It is possible to get two types of plant: plants with only female flowers and plants which are hermaphodite i.e. contain both male and female flowers within each flower head. The plants we grow appear to be all hermaphrodite. 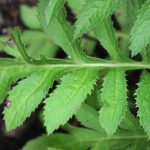 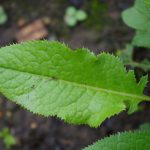 An undivided leaf of Serratula tinctoria showing the leaf edge serrations that give the plant its name. 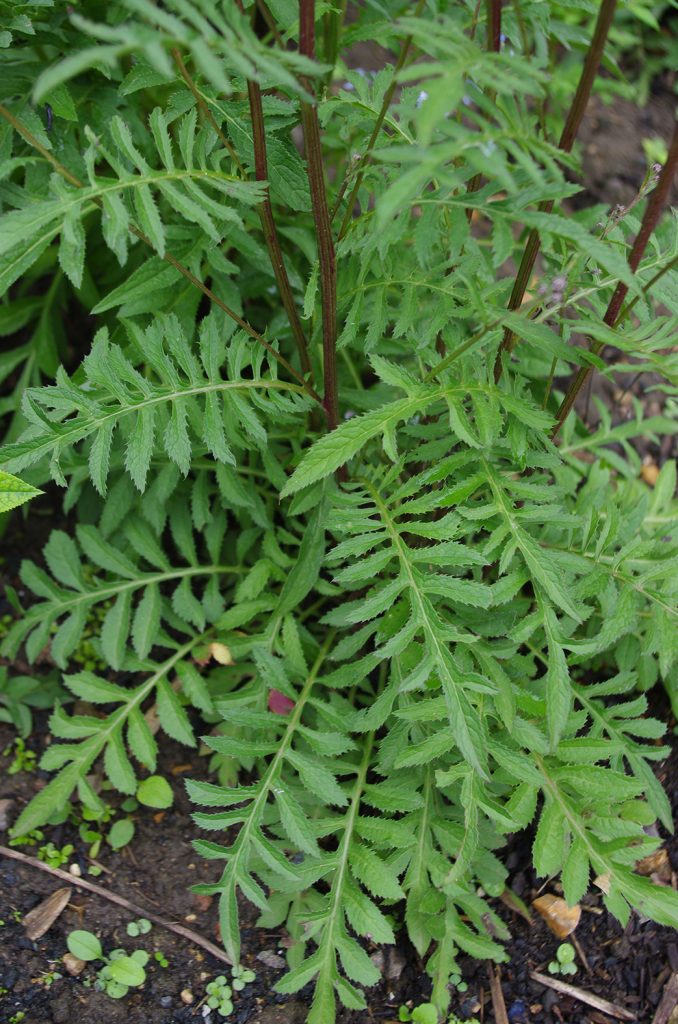 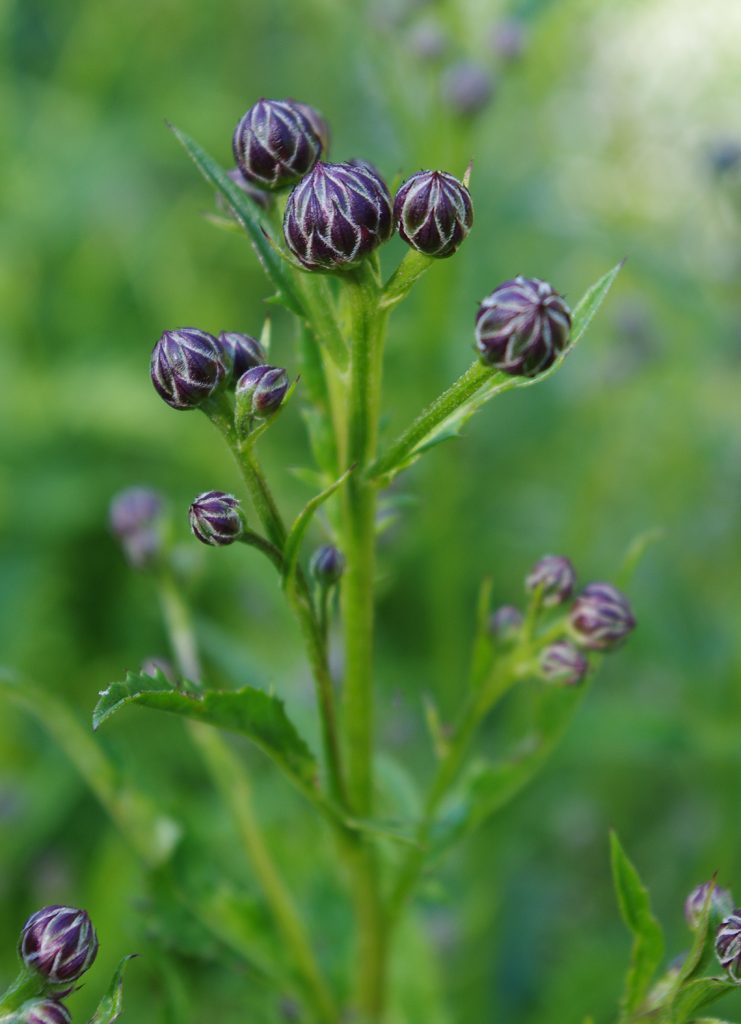 Propagation is not easy. It can be grown from seed but the seed is slow to germinate taking one or more months. Germination rates can also be poor. If growing at home you may find that the seed needs to be stratified before you try to germinate it. The seed should be kept damp at a low temperature (around 5˚C). I recommend sowing into a small seed tray of damp compost and keeping it in your fridge for about 2 – 4 weeks. Then bring it out and place in a propagator or enclose in a plastic bag on a sunny windowsill, until the seeds begin to germinate. 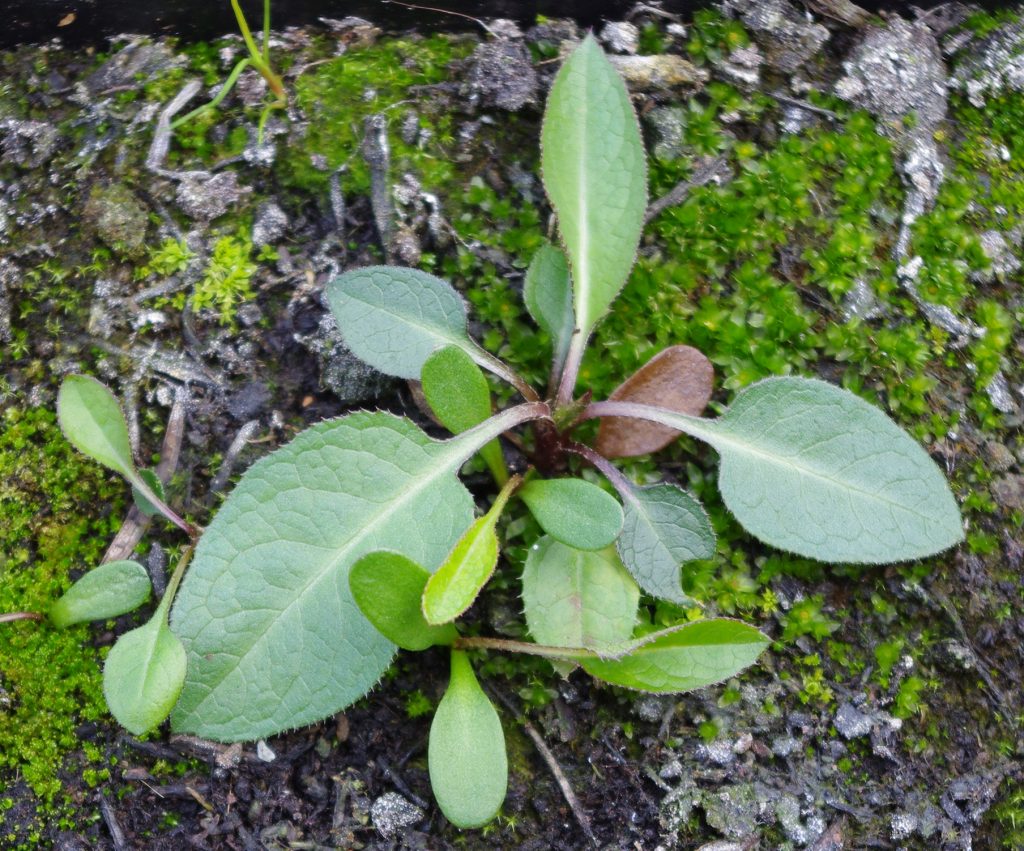 Seedlings of Serratula tinctoria in seed tray. The larger plant germinated several weeks before the others

If you have purchased a plant or two you may wish to propagate by self-seeding. The most successful way to do this is to remove any surrounding plants to expose a patch of bare earth around the plant.  Although the seed is dispersed by wind, it typically does not travel more than a few metres. The area you expose doesn’t need to be more than a six inch (15cms) around the plant.  Do not cover the bare earth with mulch but you must water regularly. 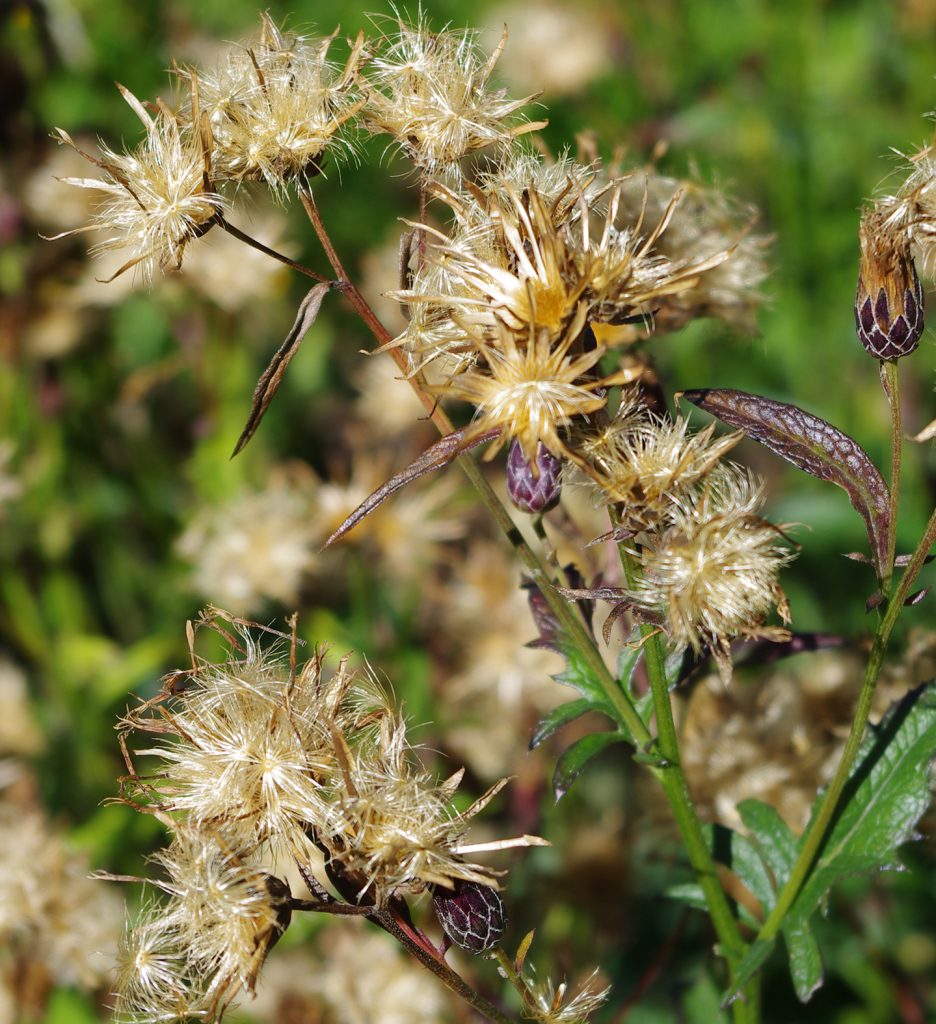 In September the seed heads open to release the seeds. These are like Dandelion seeds spread by the wind. 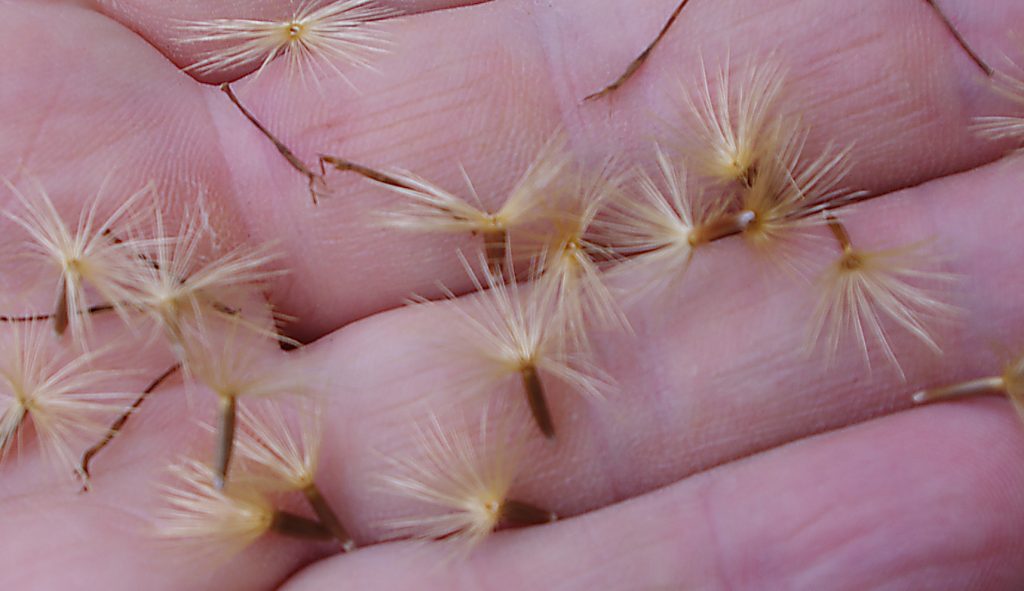 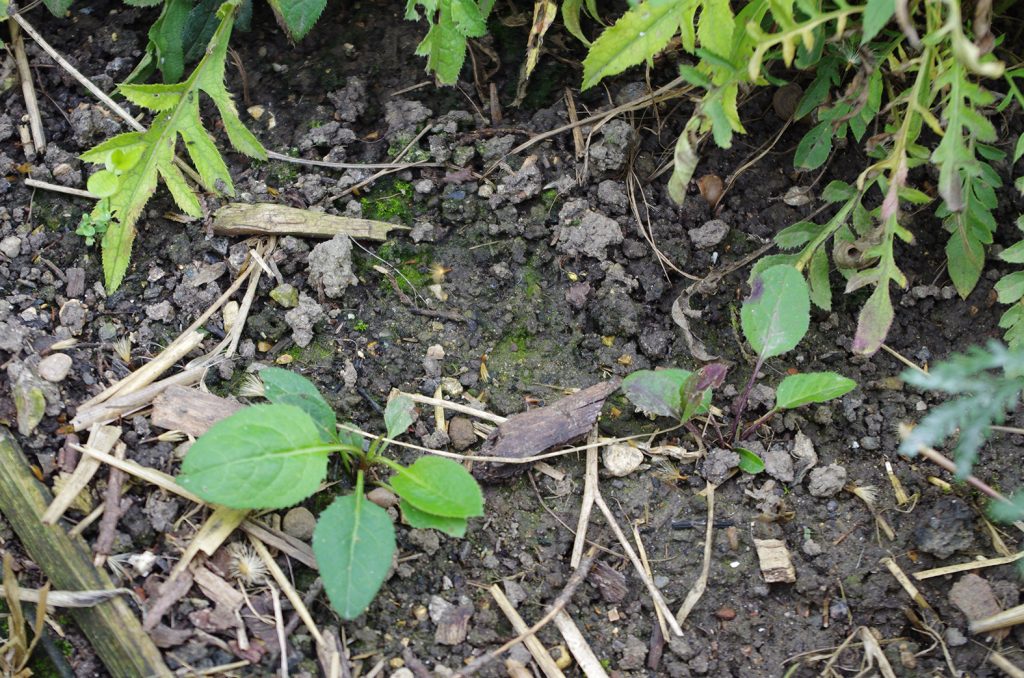 Mature plants also produce basal rosettes which can be split off from the parent plant with roots attached and potted on. 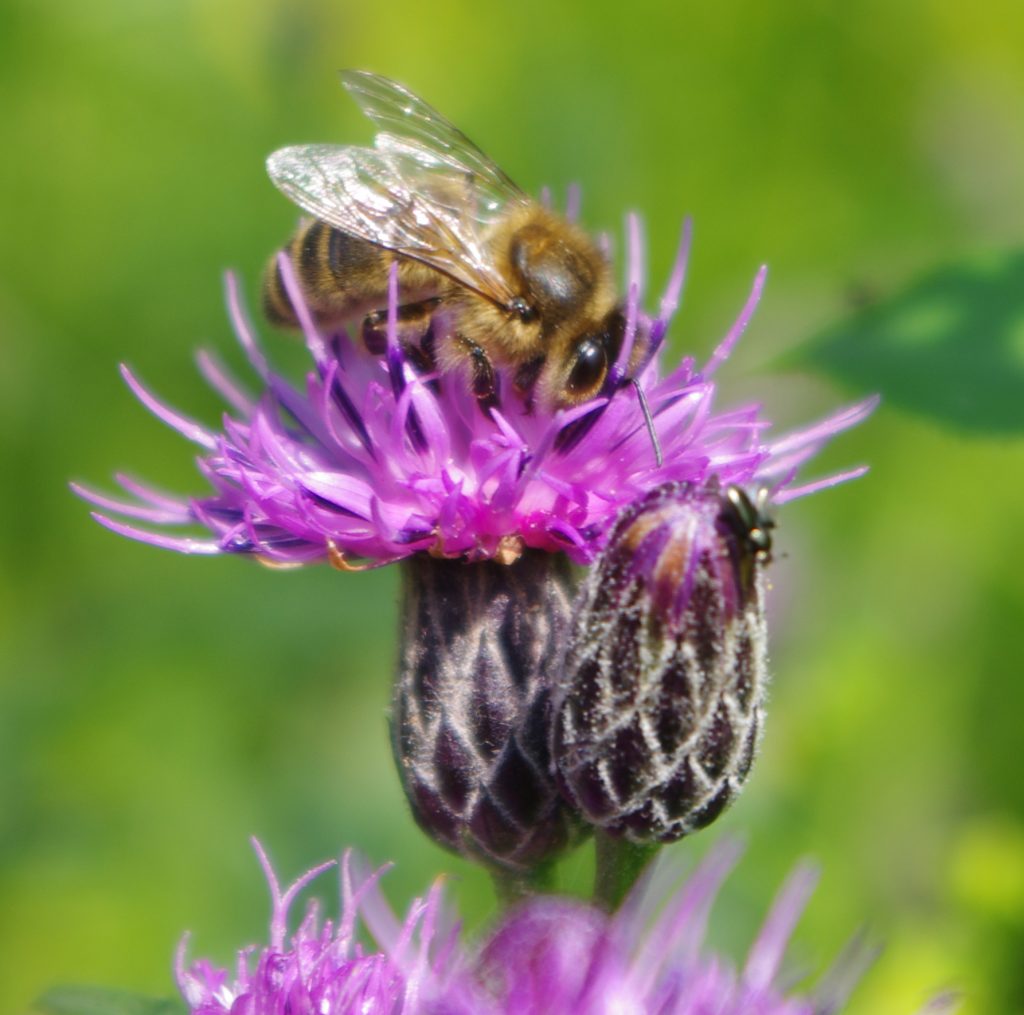 Saw-wort is very attractive to pollinators of all kinds.

Although there are pests of Saw-wort none seem to do very much harm that I am aware of. The biggest danger appears to be allowing the plants, particularly when small, to be crowded out by faster growing larger plants. So keep weeds under control and cut back any plants that threaten to cover your Saw-wort up.

In the wild, Saw-wort appears to have two favoured growing conditions, wet, alkaline, very low nutrient, bog land and dry, moderate nutrient, acidic grasslands. Plants may have genetically diversified to suit these two habitats. For the gardener this means they do not like rich soils and would prefer to be left alone when the fertiliser is handed out. Although they grow in dry pasture land these plants don’t seem to mind wet conditions. Despite all of the above, it seems that Saw-wort will happily grow in any type of soil.

Saw-wort is a slow growing plant and never gets very big. If your primary reason for growing plants is to use them as a source of dye then you may be better off growing Weld which is far more productive.

It takes a good 2-3 years before the plant is big enough to start harvesting. The leaves contain several long-lasting flavonoid yellow dyes (mostly luteolins which are the most lightfast of all yellow plant dyes). As a pasture plant, Saw-wort is used to being eaten by animals so harvesting will not kill them. However, if you want the plant to produce a display of flowers for the garden and nectar for bees and other pollinators you need to harvest the leaves in early summer before they have produced any flower stalks. They will then happily grow back. The leaves can be used fresh or dried and produce a warm yellow. 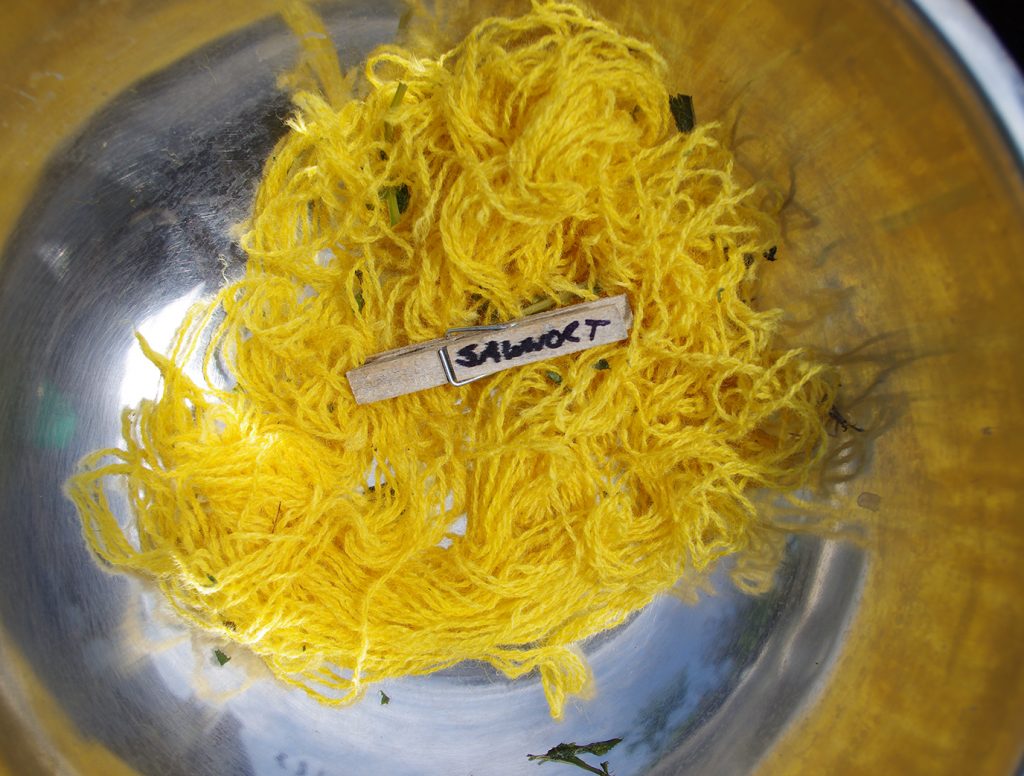 Many thanks to the authors of the following review paper. If you are interested in reading further details of this fascinating plant you will not find a more comprehensive work. 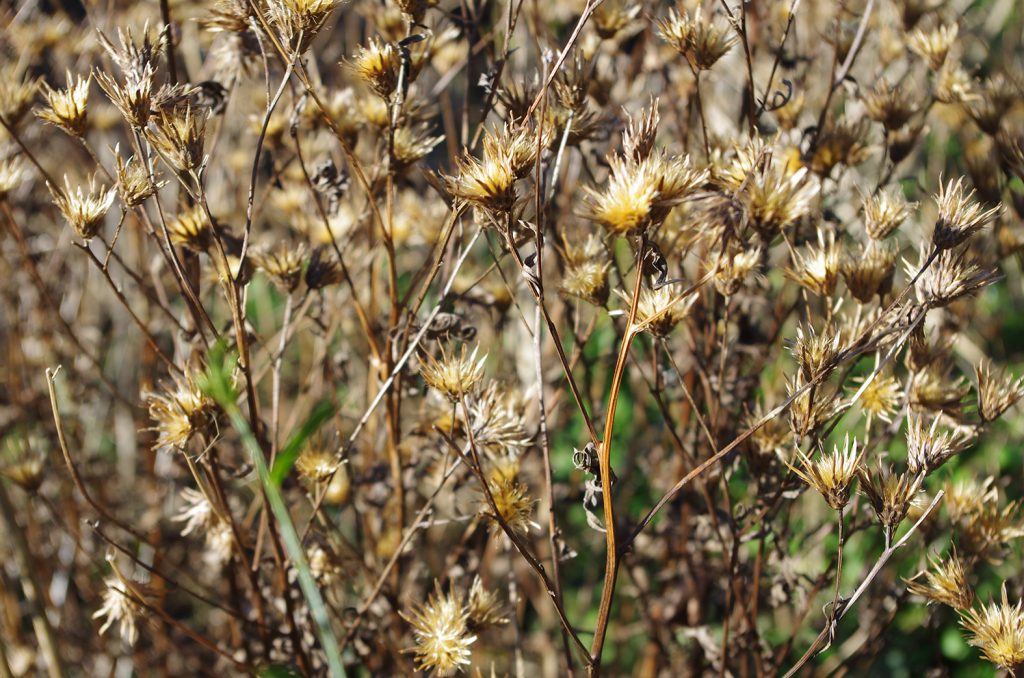 There follows a downloadable shortened version of the above post.