Richard and I have been very good friends with Susan and Ashley at Nature’s Rainbow for about 18 years. We initially met when I joined the North Herts Guild of Weavers, Spinners and Dyers. I was an avid knitter and was keen to learn to spin my own yarn. However, meeting other guild members opened up a window to more crafts. After I had learned to spin, as an enthusiastic gardener and being married to a botanist, growing my own colour was the natural next step. 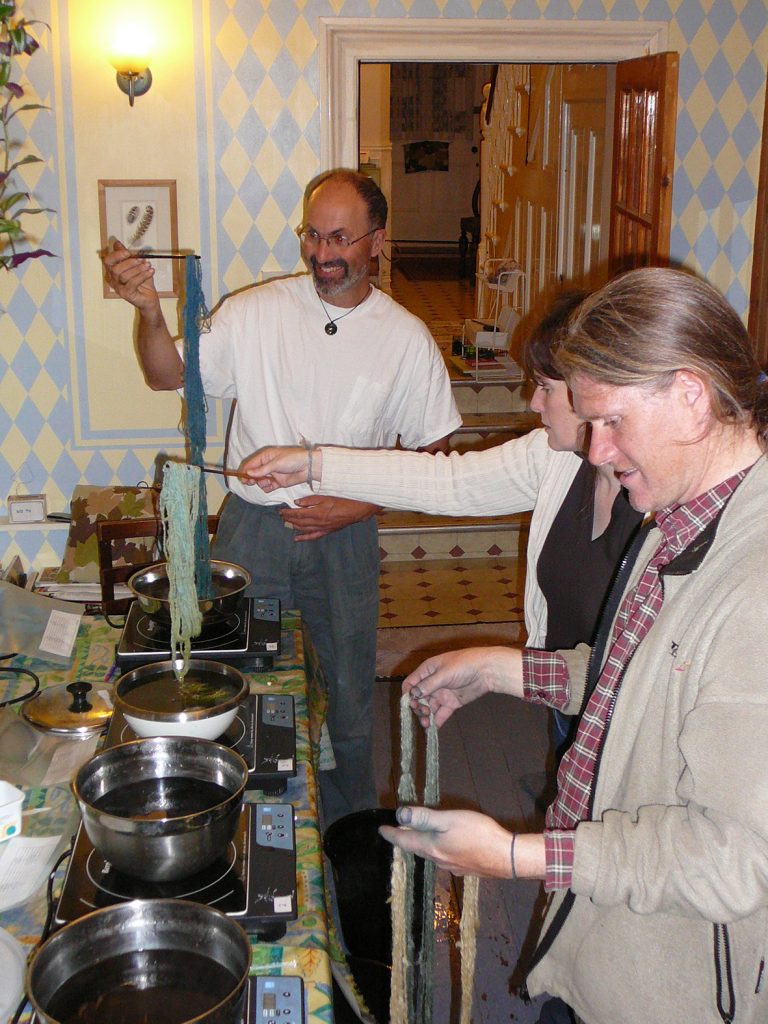 As newbies, Susan and I brought some fresh energy to the Guild and were soon dragooned onto the organising committee. By that time our disappointing first forays into dyeing with plants prompted us to work together to develop our dyeing skills and hone some of the dyeing recipes we had researched and tried. It was a natural fit, Susan with her scientific background and research bent, Ashley with his hands-on practical approach to growing and doing, and myself with a lifetime’s experience of designing scientific experiments in my career as a statistician. Together, we formulated and tested theories of what factors influenced the colours produced from dye plants. Through well designed experiments and statistical analysis, we started to rediscover some of the knowledge lost in this country since dyeing became a synthetic industrial process. We found that many dyeing books had started passing on recipes without rigorous analysis, so had incorporated smelly ”red herrings” and the occasional “old wives tale”. In time we were able to develop reproducible dyeing methods to produce the strong colours of the mediaeval ‘Grand Teint’ of plant dye primary colours (woad/indigo blue, madder red and weld yellow), along with many other commonly used plants. A feat which, when we started dyeing, were told was nearly impossible and that we would get to love the “soft subtle hues” of dye plants.

In more recent years Susan and Ashley began seriously sharing their expert knowledge of growing and using dye plants, giving talks, writing articles, leading workshops and developing courses using this blog as the hub of their activity. Meanwhile, Richard and I put our efforts into moving from suburban Hertfordshire to rural Devon. 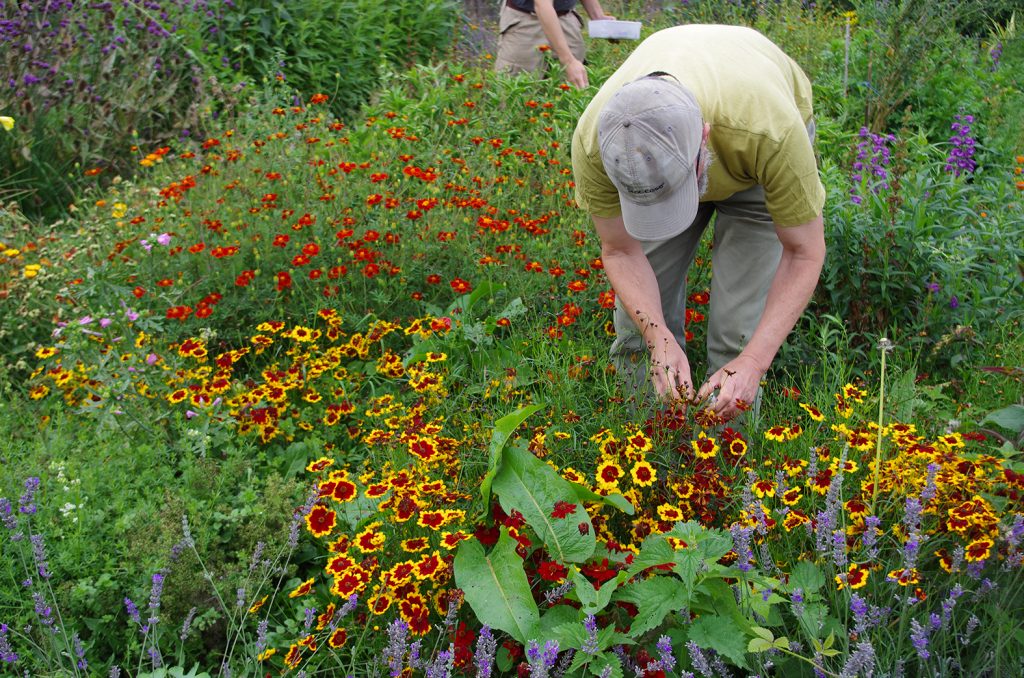 We moved to Dartington in 2017 and immediately got involved with the sustainable horticulture team at Schumacher College, where they were developing new demonstration gardens, including a dye plant garden. We initially offered seeds, plants and growing advice and in 2019 we mentored one of the horticulture students in growing dye plants.

We love our new home where we have plenty of growing space. Initially we focused on growing food but have now incorporated dye plants as part of our crop rotation. We have also become well integrated into the Devon craft events scene, having stalls at Bovey Tracy Contemporary Craft Fair, Buckfastleigh Wool Gathering and RHS Rosemoor Wool & Yarn Fest, along with numerous smaller events. 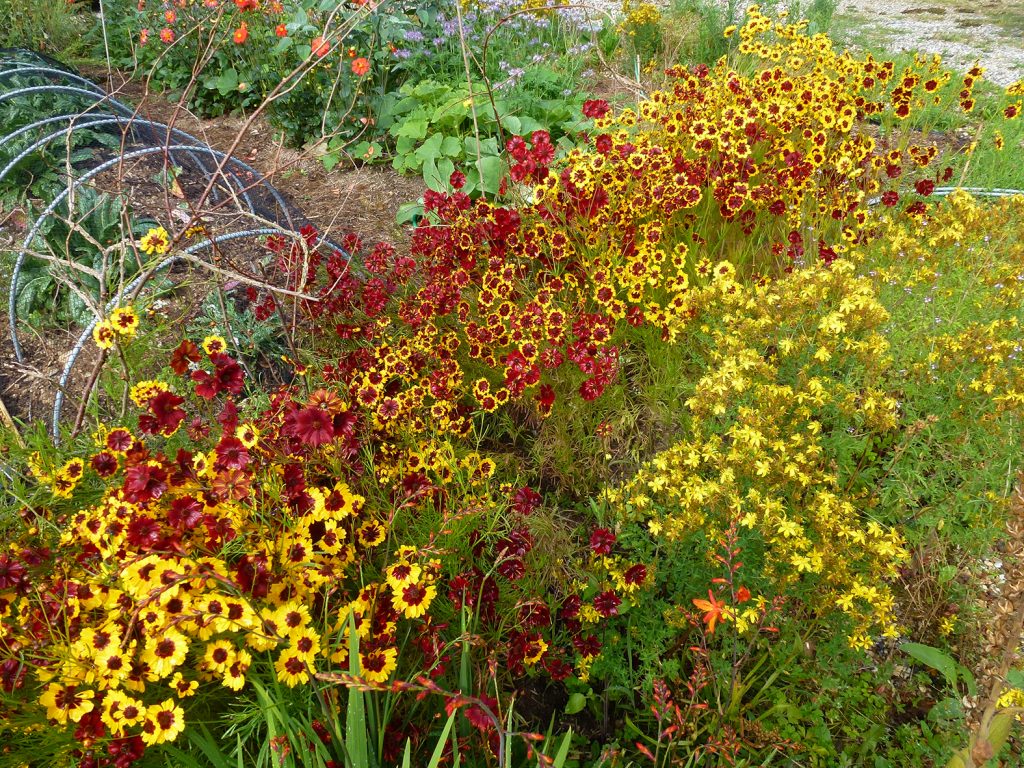 A lush display of Coreopsis tinctoria at Brian and Richard’s Devon home in 2020.

We have continued our friendship and collaborations with Susan and Ashley, mostly at a distance but with occasional forays to Hertfordshire and Devon. We had planned a busy year for 2020 but those plans were pushed aside by an inconsiderate pandemic that stopped everything in its track. Part of the 2020 plan was for Susan and Ashley to present their Dye Garden Design Course here in Devon, using our own garden and that of Schumacher College as the backdrop for their teaching. Additionally, we thought of a drop-in indigo dyeing day would also be fun to do, where local friends and craftsfolk could drop in and see the Nature’s Rainbow team in person and do a bit of dyeing on the side. Growing was already initiated well before we started the first lockdown so we had an excess of dye plants which we filled most of the spare space in the garden and also in the dye garden at Schumacher College, which we volunteered to maintain and manage due to the lack of student manpower. Harvesting happened throughout the summer and autumn, and the room above the garage became a drying room for dye plants, so we now have a big stash of dried dye stuff. The Japanese indigo and woad crops need to be used fresh, so throughout September and October I had an indigo vat almost continually on the go in the kitchen, producing plenty of blue dyed fleece. 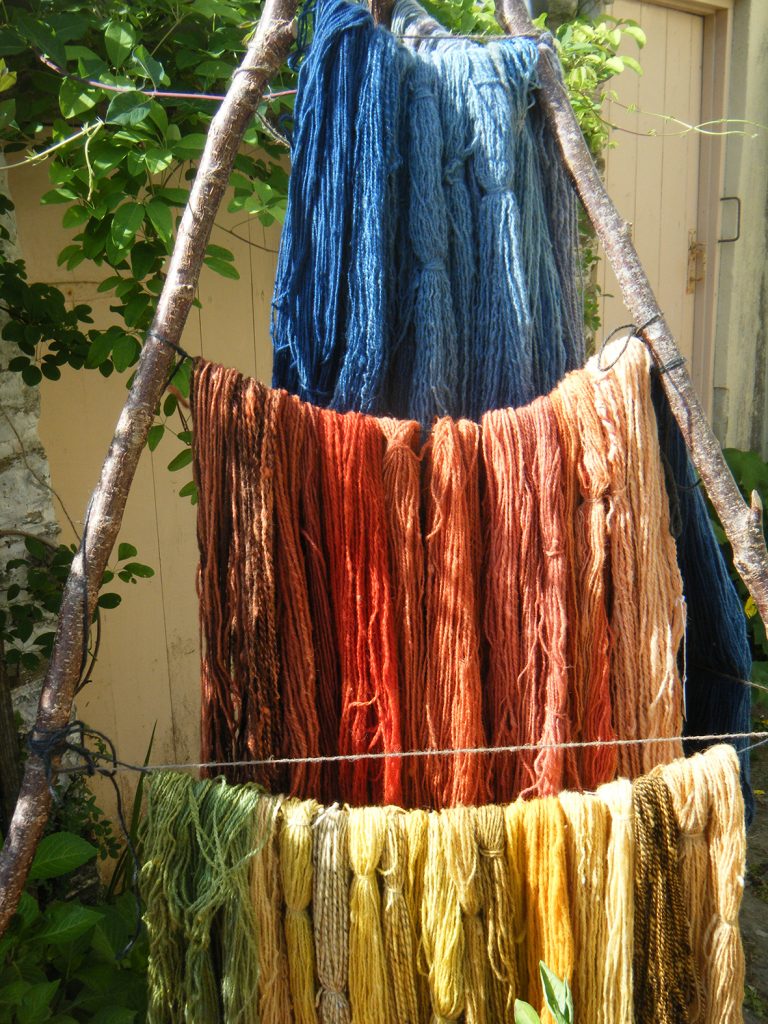 Without access to craft events and with the cancellation of dye plant courses, we have been thinking of other ways of using our dye plants. Naturally, the internet has become the new marketplace, a new world for us small scale producers and crafts folk. Richard has developed a website which is now ready to launch. This website is very much a shop window for us, very different than the fully integrated information hub that is Nature’s Rainbow. You can buy dried plant stuff, beginners dye kits, dyed fleece and the dye plants themselves. Come and have a look at https://badgercrafts.co.uk/