Natural dyeing is relatively niche activity and small businesses play a key role in keeping craft dyers supplied with materials from around the world. I have huge respect for the many small and medium sized enterprises in our sector and I go out of my way when teaching or giving talks to recommend expert suppliers providing a good range of products at keen prices.

When I heard Willo Fibres had sold the natural dye side of their business to a new company, Blotz in Cirencester, I was curious to know more.

Sue Day recently took time out from her busy schedule to be interviewed. A truly fascinating story sits behind Sue’s interests in natural dyeing and how she and her husband Simon came to be running the business.

All text and images are copyright Sue Day, Blotz

An interview with Sue Day at Blotz Natural Dyes

What is Blotz all about and when and how did you decide to expand into dyes?

The word BLOTZ is an acronym for Buildings, Landscapes and Other Thingz.

My husband Simon is a very keen and knowledgeable wargamer, think of Games Workshop with the small metal soldiers. These he has been playing with since he was a very young boy. He has had several companies selling these and we bought a company in 2005, not long after we were married, to make terrain for the models. We had to sell this business due to illness but that did not last very long, and with the help of my Father we started up Blotz with an industrial laser making scale model buildings for the wargamer. We now have two lasers and sell scale model buildings all over the world. We have also now started to supply other craft shops with specialist items for knitting, weaving, and spinning.

When P&M were selling their business a few years ago we did consider buying the whole business, but Willo Fibres succeeded in buying the dye part of the company. We heard that Willo Fibres were hoping to retire at the end of this year. We approached them with an offer to buy the dyes from them. This offer was accepted and we became the new owners of the dyes within two weeks of enquiring.

Have you both always been interested in textile craft?

My interest in crafts started when I was a young girl of 9 years of age. My mother was a crafts teacher, and I was her guinea pig. I was taught to spin on a drop spindle before she taught her class. Along came a small loom while Mum had a large 4 shaft loom. Then the fun began with natural dyeing in the house and the garden. I was allowed to help with foraging for the dyes but not to do any of the dyeing. As chrome mordant was involved every now and again it was not considered safe for me to take part. So, my interest in dyeing was started over 50 years ago.

Simon has been interested in leather and bone working along with amateur stone masonry, but he can turn his hand to any form of craft. Spinning and weaving are just two that I have taught him over the years.

Simon’s main interest is in wargaming, but his main day job is a computer programmer. Which is coming in useful with the new web site he is building for both businesses.

When I left school, I went to work on farms. College beckoned and I passed as a farm manager specialising in sheep and beef. This could have been a throw back to when I was born as the family lived in a caravan in the orchard of a sheep farm. I would sleep all day while the lambs were running and jumping all around the pram, but I would be awake all night.

Simon and I met at a living history event, and I joined the group a week later as the natural dyer. All those years ago watching my mum stirring up pots of strange plants, smells, and wonderful colours. Who would think that a deep red could come from some brown dried roots or that a strong bright yellow could come from some straw like plant? My mother always liked to tell her friends that I would “get under her feet”. But I learn far better by watching than reading a book. So those years of watching and listening to her talking about the dyes all suddenly came flooding back.

Now I work part time for the National Trust at Chedworth Roman Villa, where you will quite often see me dressed as a Roman Lady, either cooking or natural dyeing, talking to the visitors about what the Romans were using in their daily life. 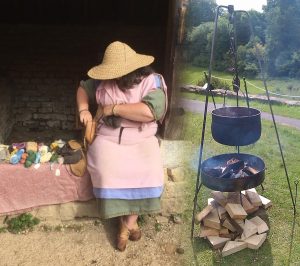 A typical day could start with myself taking a group of exited school children around the Roman Villa, covering for lunches, and then seeing the school children off back to school. Then going into the unit to find Simon still doing his day job (computer programmer), switching the lasers on, printing off all the various orders. Cutting out the buildings and bagging up all the dye orders. Answering emails and ordering supplies. Once a month a large dye order is placed with our suppliers, which will take up to two weeks to arrive, and a week to bag and label. We can both be down at the unit till late. Up to 15 hours a day can be spent completing all the jobs which need doing.

Where do your dyes and seeds come from?

The dyes come from three different suppliers, as not all dyes we carry are carried by one supplier. Our main supplier manages to get the dyes direct from the farmers’ cooperatives and they pay a fair price for these dyes. Only the best dyes are selected. Our Madder comes from Iran which will give a beautiful deep red, rather than the Indian Madder which tends more towards orange. 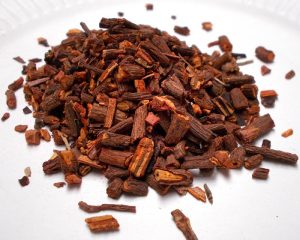 We do grow a lot of dyes but not in a sufficient quantity to sell, so these are for personal use only. Most of the front and back gardens are taken up with dye plants and more are being added each year.

The seeds which we buy each year come from Nature’s Rainbow. I seem to have a problem keeping Coreopsis from one year to the next. The dye plants I buy are from Saith Ffynnon Wildlife Plants. I will also collect dye plants and seeds from Living History events and garden centres.

What crafts besides dyeing do you practice?

Simon will do leather working (he has made a pair of Viking shoes for me), stonemasonry and any general woodworking items I require. He will also programme the laser to make sock blockers, thread holders, EPI gauges to name just a few things.

I like to do tablet weaving, spinning, sprang weaving, narlbinding, warp-weighted weaving and of course natural dyeing. But I have also just been taught how to do broomstick crochet. 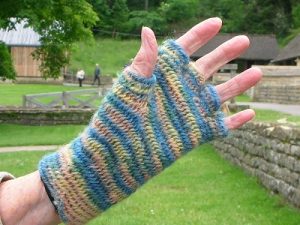 Any favourite products amongst your range?

I must admit that I do have three favourite products: Weld, Madder and Indigo which I grow in the garden. This is because these give the three primary colours from which all colours can be produced. But I have started to grow some of the endangered wild dye plants to play with the resulting colours. But natural dyeing is a never-ending voyage of discovery.

Sue’s dye plants and a selection of dyed goods

I completed the Association of Guilds of Weavers, Spinners and Dyers Certificate of Achievement in natural dyeing in 2021 of which I gained a distinction. I am now working towards the Certificate of Advanced Textile Studies using my three favourite natural dyes. 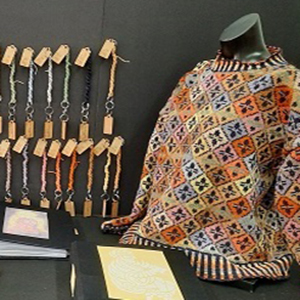 Blotz Out and About