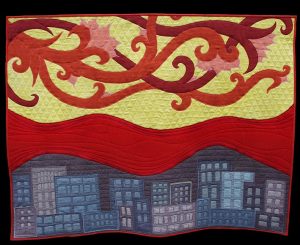 Norwich Red was a plant dyeing process for madder invented by Michael Stark in the 19th century. It was special for producing exactly the same shade of red on wool as on silk. Sadly the recipe has been lost. Otherwise I would definitely have tried it out for the quilt shown here. The decorative upper section is made from layers of silk/wool gauze dyed with madder. You can see how these shades differ to the pillar box red of the river – which consists of 100% wool.  The quilt was inspired by the sumptuous woven shawls exported from Norwich to royal courts around the globe in the Victorian era. The weavers themselves were often on the breadline. The Wensum is a chalk river, making it ideal for madder dyeing and it was reputed to have ‘run red’ when the many dyehouses in the city centre emptied their vats.

I have no evidence that there were any dyers in my family tree, although my family has been in Norfolk for many generations. It’s probably pure coincidence that I have the perfect name for what I am doing. I’ve spent most of my life embarrassed about having a name that sounds like an instruction to ‘keel over’ and ‘shuffle off this mortal coil’. I like my surname a lot more nowadays.