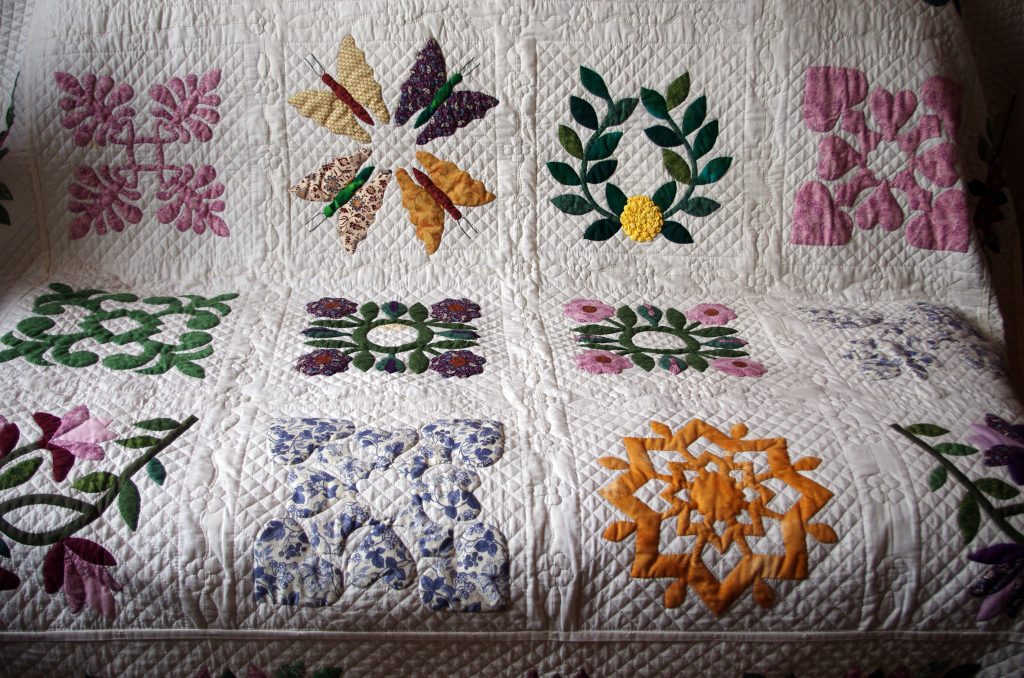 This post was inspired by an interview for British Fibre Art Magazine (see issue 10 July/August 2018).

Ashley and I both had mothers who made things. My mother was passionate about colour and had a very good eye. Her greatest joy was working at the sewing machine, making clothes and soft furnishings. She was definitely a thwarted designer. Ash’s Mam came from a family of very skilled knitters. I wonder if this gave her the confidence, once the children were grown, to try a huge range of crafts? She mastered many styles of lace-making, was an accomplished cross stitcher and quilter (see Baltimore quilt above) and made all manner of 3D objects. Both women were motivated by mastering technique and producing a beautifully finished product.

Ash and I both studied science at A level and university. I think that’s why we like careful experimentation and are constantly trying to understand more about how plant dyeing works. Ashley studied biology specialising in botany, so it makes sense that he’s so driven to grow and explore different plants. I’m more interested in the history of science and the recipes which have been lost.

I also realise that not having children (I had cancer in my mid twenties) has affected our life choices a great deal. We were freer to downshift when the mortgage was paid off and there were fewer external pressures on us to conform.

This doesn’t mean we haven’t thought a lot about what we might ‘leave behind’ after we’re gone.  And what constitutes ‘right living’. While we were in well-paid work we supported various charities. After we shifted to part-time lower paid work, we became were involved in local community projects and environmental campaigning. Ashley retrained in horticultural therapy and got enormous fulfilment from enabling people be happier and more active through gardening and the outdoors.

Gradually, over the last two decades, we have moved further away from the mainstream as we have managed on a steadily lower income. This has an interesting effect. It’s like being on a permanent retreat at a 10% level. You see things slightly from one side, more critically. The mainstream media is less relevant. You spend more of your time producing rather than consuming. For example, in the 2000s we made huge amounts of very passable wine, excellent jam and lots of vegetables. Our focus gradually shifted onto beekeeping and plant dyeing, which at least offered the opportunity of some income rather than risking liver failure and tooth decay!

In the process, we also had the time and emotional capacity for hands-on care for friends and relatives. This isn’t something we anticipated. It emerged out of making deeper connections in our neighbourhood when I got involved with transport campaigning locally. When you find careers away from where you grew up and you don’t have children and you are quite extreme introverts, you don’t make friends on your doorstep easily. Suddenly we entered a fascinating network of extraordinary people. Maybe it’s special to Hitchin, or special to the particular neighbourhood where we live, but I suspect every street has these networks waiting to welcome you in.

One such very special friendship was with Diane who tragically developed motor neurone disease. By 2005 our work/life situation was flexible enough that I was able to join the team of friends and family who supported Diane so she could have her wish to remain at home throughout her illness. This gave us the experience and confidence to home-hospice, first Ashley’s Mam and then my own mother as they in turn developed cancer and died. We didn’t do this unsupported. There were  palliative care services in the community in both cases. Siblings also helped. But we were able to be fully present and ‘live in’ when our mothers needed us. Both times it was heart-rending and emotionally exhausting but it also felt completely the right thing to do and we have no regrets.

So how does this relate to modern craft?

I read a book by Professor Susan Luckman last week at the British Library: Craft and the Creative Economy[1]. And it all fell into place.

She explores from all angles why the hand craft movement is currently thriving in developed economies. What desires and needs are being fulfilled for the maker and consumer?  Is small scale hand-made artisan production an act of resistance to unsustainable capitalism, a distraction or a self-soothing coping strategy? She explores whether the popular archetype of the entrepreneurial craftsperson with a balanced home/work life is a fantasy, a romantic ideal or a valuable alternative microeconomic niche. Perhaps the popularity of the ‘home made’ reveals the depth of hunger for meaning and making ethical retail choices? People want in some way to reject mass consumption of disposable items where the environmental and social impacts are externalised, hidden from view.

Luckman resists any simple answers. She accepts that the craft movement is tiny in the grand scheme of things and mostly serves a privileged elite. She is also deeply sceptical of the gender stereotype of the glamorous ideal female – attractive wife, mother, home-maker and entrepreneur running it all from home and letting you, the customer, see every detail of the home environment where this blissful production takes place. She warns against the fetishisation of hand tools and a false dichotomy of design and making.  And she accepts that crafting is a soft option compared to politics for changing the world for the better.

But, she does come down on the side of hand-made crafted items having a special quality for the maker and the consumer, which might signal a future with more sustainable and kinder economic models. She likes Jane Bennett’s[2] concept of ‘vibrant matter’ and ‘enchantment’ to explain the emotional responses many people have to the hand made.  This suggests that hand made items that are aesthetically pleasing, made of natural materials, carrying visible signs of the making process (or accompanied by a story online) do broaden attitudes to consumption, valuing and repair. They do pose questions that can be more broadly asked about sourcing, embedded energy, lifecycle and sense of purpose.

Luckman also suggest as crafters we should be bolder. The emotional desire for the hand made should not be underestimated. It is not naïve. As crafters we should be proud to “dig where we stand” and not be afraid to shout about our values and ideals. Without giving in to a pressure to conform to airbrushed social media archetypes, we can powerfully affect people who connect with what we make. We can ‘tweak and bend capitalism’ and create ‘useful and healthy identities as workers’.

I realise that I am already living in what Luckman calls the ‘downshifted cultural economy’. Ashley and I are practicing craft for the enchantment of making vibrant objects, enhancing our wellbeing and usefully supplementing what Luckman describes as a ‘larger strategy of downshifted and slower living’.

Having read her book, I feel empowered to be bolder, tell more about my choices, my politics, my wider values and my struggles to navigate this territory.  She recommends not feeling ashamed to keep telling your story as you go through life’s ups and downs, share how you are actively designing your life. It might have a bigger effect than you imagine. 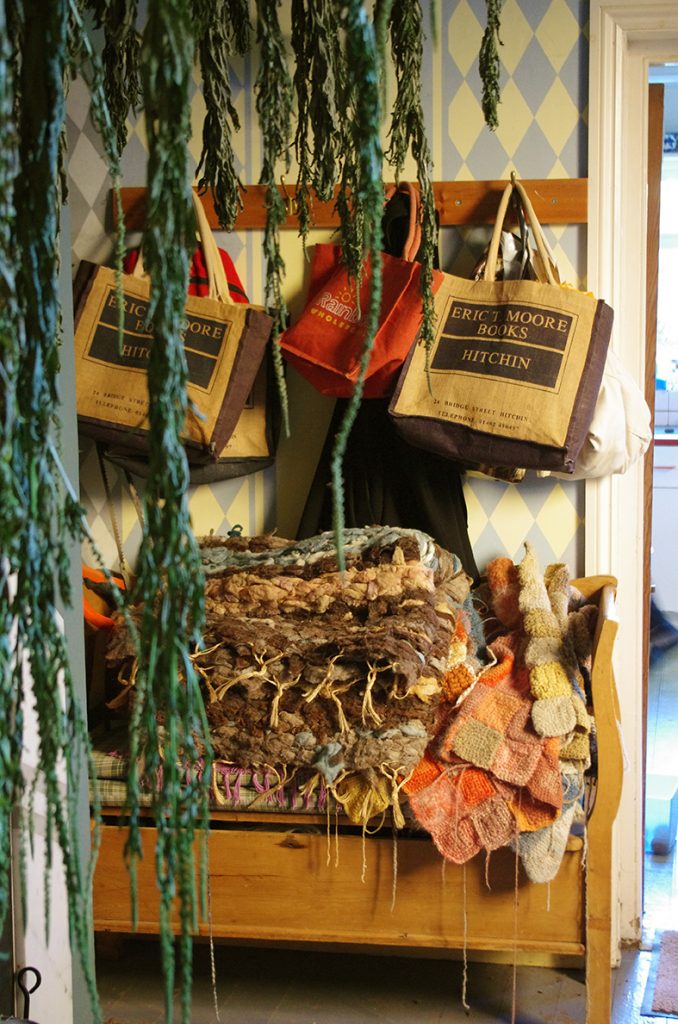