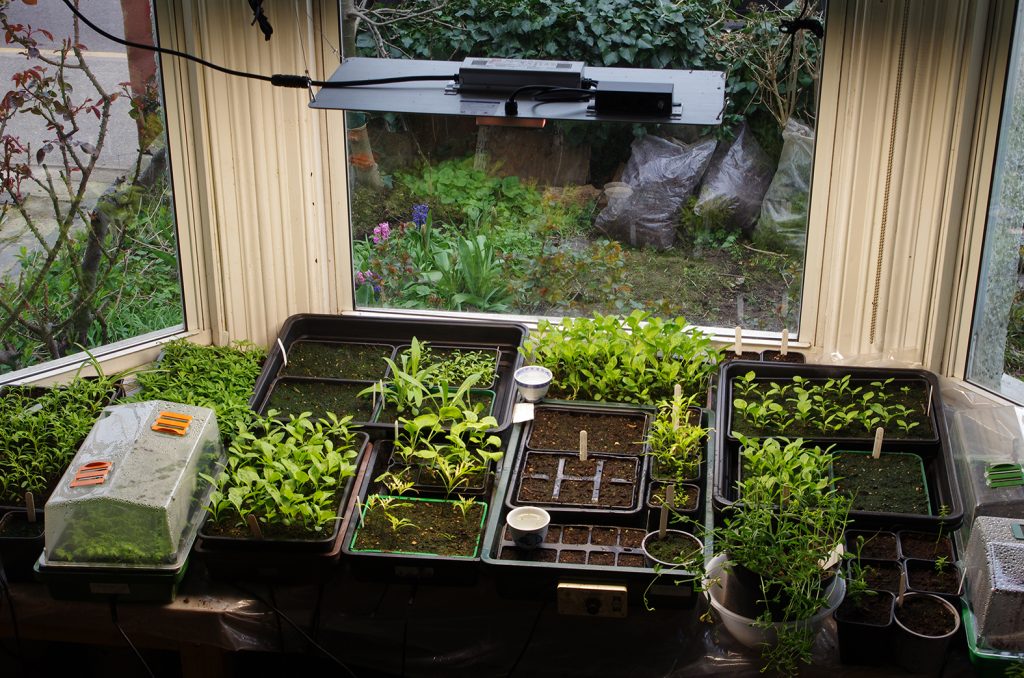 The bay window dye plant nursary in March 2021.  Four varieties of Japanese Indigo, Tagetes, African and French Marigold and a host of other dye plants.

Last year I plucked up my courage and ordered a grow light to help with my dye plant growing. Initially I had hoped to keep my Japanese indigo plants alive for as long as possible to allow seed to mature after cutting the flowers and bringing indoors to protect from frost. This did succeed in keeping some of the plants alive but the effect on seed production was dismal. Despite this, I knew the main benefit of the light would come in the spring when I started sowing seed.

First let me say that I am neither a botanist nor a trained horticulturalist so my experience and knowledge of grow lights and their effect on plant growth is very amateurish. However, it has occurred to me that since “relatively” cheap LED grow lights are now available, more and more people will consider buying them to help with their dye plant gardens. So it might be helpful to anyone considering investing in one of these if I share some notes here on what happens when you start to use one.

Grow lights are an incredibly powerful tool because they allow you to control day length at the flick of a switch. There are 3 types of plant:

In Short and Long Day plants it is actually the length of continuous dark which is the determining factor. Also please note that generally when the day length is less than 10 hours, vegetative growth (non-flowering growth) dwindles almost to a halt. See High Mowing Organic Seeds blog spot for more.

Of course there are plenty of other factors that influence plant behaviour like temperature, moisture, nutrients etc. but day length is often overlooked because it’s not something we can change unless we have a grow light. Let me just say at this point that normal artificial light, such as we use in our homes, is insufficient to make much of a difference to plant behaviour as it is not bright enough and does not have a daylight spectrum. Also plants placed on a windowsill rarely ever get enough light to grow properly and in northern latitudes are barely surviving during winter periods.

Which grow light and why?

So first let’s just say which light I bought and why. This is a “Spider Farmer” product and is made in the USA It is the SF2000 and it cost me well over £200 which is really quite a big expense for us. It is advertised as having a 50,000 hours lifetime or approximately 5.5 years running 24 hours a day. I only intend to have it running approx. 12 hours a day on average so hopefully it will last about 10 years in all. That seems reasonable. The device itself is well made and robust and only consumes as much power as an old 200W filament light. It’s easy to set up and adjust light output, as well as position at a distance from the plants. I was particularly drawn to this range of Grow Lights because they get good reviews, particularly from Cannabis growers and they should know! In retrospect I would rather have the next model up which gives double the light output but that’s a little too expensive for us.

My plant nursery is a bay window, but buildings shade out the morning sun and the window does not get much in the afternoon either. So in early spring I only get a few hours of sunlight around midday. I also use heated seed trays because many dye plant seeds require a bit of heat to speed up germination.

I sowed my first seed around 22nd Feb 2021 and set the timer (which you need to buy separately) to mimic the average day length of the time of year (about 9 hours) and set it to follow the normal daylight pattern. Why did I do this? Well I wanted to try and keep the development of the seedlings as normal as possible. After a month or so I increased the day length to 10 hours but then I left it at that until early April. It was then that I noticed that my broad leaf Japanese Indigo variety was producing premature flowers, at which point I rapidly increased the day length to 13 hours which will hopefully prevent any of the other varieties producing flowers. 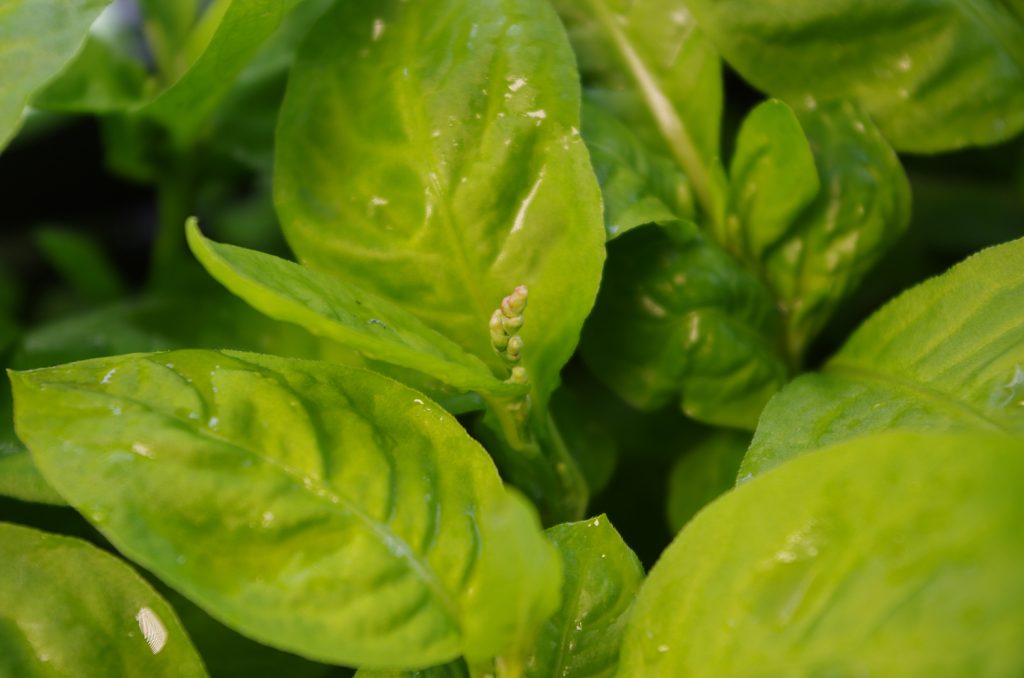 Nearly all these broad leaf Japanese Indigo plants are producing premature flowers. The variety is probably Moruba. The other varieties have not done this so it looks like Moruba is particularly prone to this problem and should be sown at least a month later.

So what is going on here? I have encountered reports of premature flowering before (see here) and it is nearly always associated with very early plantings, during days of less than 12 hours of daylight. Japanese Indigo is naturally a late flowering plant so it’s almost certainly a “Short Day” plant.  The longer a seedling is being exposed to a sub-12 hour day the more likely it is to flower.  Normally I sow my Japanese Indigo seeds in late March, so I personally have not encountered this premature flowering before but this time I planted in February because I wanted to get the plants going quickly this year. In my nursery all other conditions are “go for growth”: temperature, moisture nutrients etc., so the only factor that could have caused the premature flowering is the short day length. The effect was probably more pronounced because the grow light provides intense bright light and extra heat encouraging the plants to grow fast.

The problem with premature flowering in Japanese indigo may be solved by setting the Grow Light to come on in the middle of the night for 10 minutes as it is the length of uninterrupted darkness that is the critical factor. I have not tried this yet but it ought to work. What passers-by in the street and neighbours will think though….

Interrupting the period of darkness may also have unintended consequences for the other plants.

Other problems with the grow light

I noticed that three dye plants suffered from a partial die back of some of the early leaves. These were Tagetes, Woad and Cosmos sulphureous. This happened in plants grown slightly out of the direct light produced by the device and during the time when the plants were only exposed to 10 hours day length. I do not know the exact cause, but this problem rectified itself when the plants were given more light with the longer day length. I’d love to hear from other growers who might know why this happens. 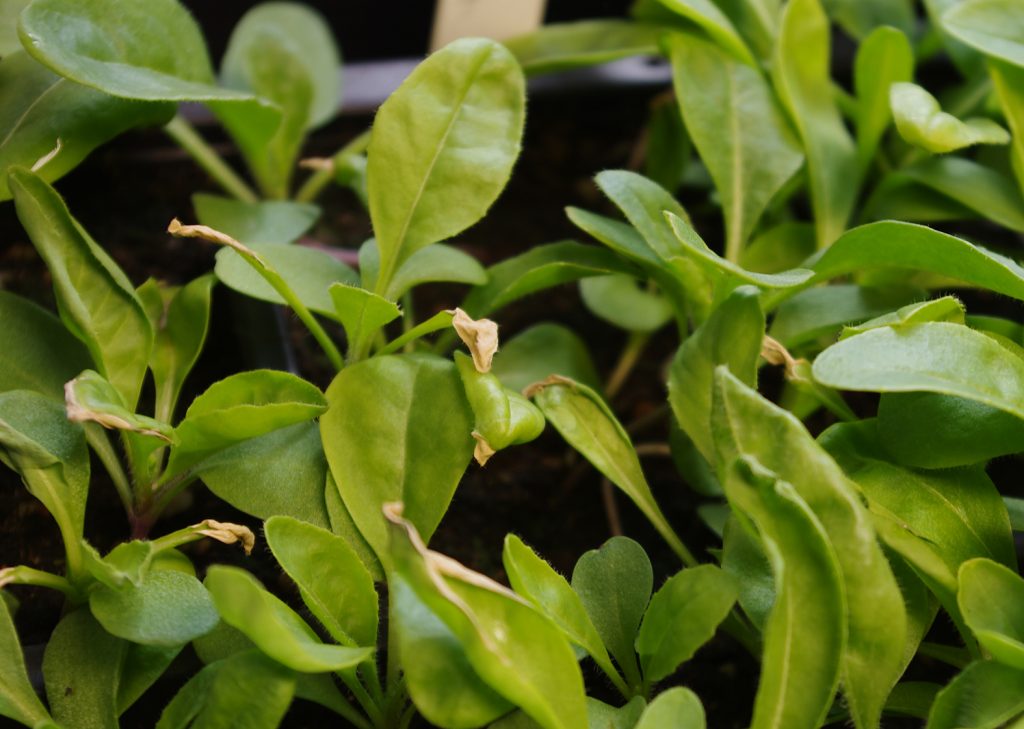 Dieback of some of the woad seedling leaves. Starts at the tips of the leaves and moves down.

The advantages of the grow light

All plants have responded well in terms of growth. The light has completely stopped the problem of plants growing thin, weak elongated stems (becoming “leggy”). As a result the seedlings are generally nice and compact. This has worked particularly well with those dye plants with a vegetative rosette stage in their life cycle e.g. Woad and Dyers Coreopsis. When the Dyer’s Coreopsis is sown without a grow light has a very strong tendency to produce flower stalks while still in the seed tray. This year not a single Dyers Coreopsis seedling has done this.But it remains to be seen what will happen now that I’ve increased the day length to 13 hours. 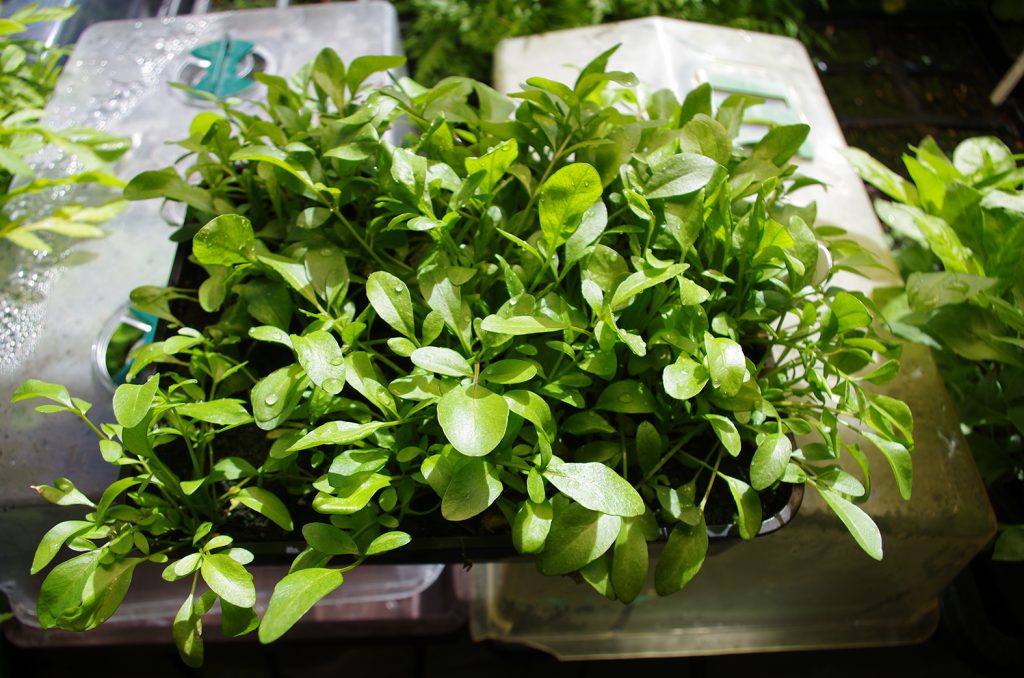 I have the light on even when the sun is shining in. Sunlight is still brighter than the Grow Light but it is polarised light and casts dark shadows. The additional light from the Grow Light fills in the shadows and provides a much more even light.

I can’t tell for certain but I also think there has been a beneficial effect to germination for some plants e.g. Indigofera tinctoria which, despite the seed being well over a year old, has germinated better than last year.

I am very happy with the Grow Light and although I was hesitant to begin with, I feel I can now recommend these amazing devices. If you are considering getting one it will be a worthwhile investment particularly if you live at high latitudes which have very short day lengths during the winter.  With such a diverse range of plants it’s going to be interesting to find out how the light effects each one. Dye plants have a huge range of behaviours so there is a lot to learn. If you do get one and are only growing Japanese Indigo then set your timer to a 12 hour day length or interrupt the period of dark with a short period of light to avoid premature flowering.