Here at Natures Rainbow we love collaborating with fellow dyers. This article is by Brian and Richard, who until a few years ago lived just up the road from us in a Bedfordshire village. We spent many years exploring plant dyeing together at the North Herts Guild of Weavers, Spinners and Dyers. This evolved into carrying out systematic experiments to improve our dyeing processes. It was Brian and Richard who introduced us to Hedge Bedstraw and, as our plants are not yet mature enough to dye with, we have asked them to share their learning with you. 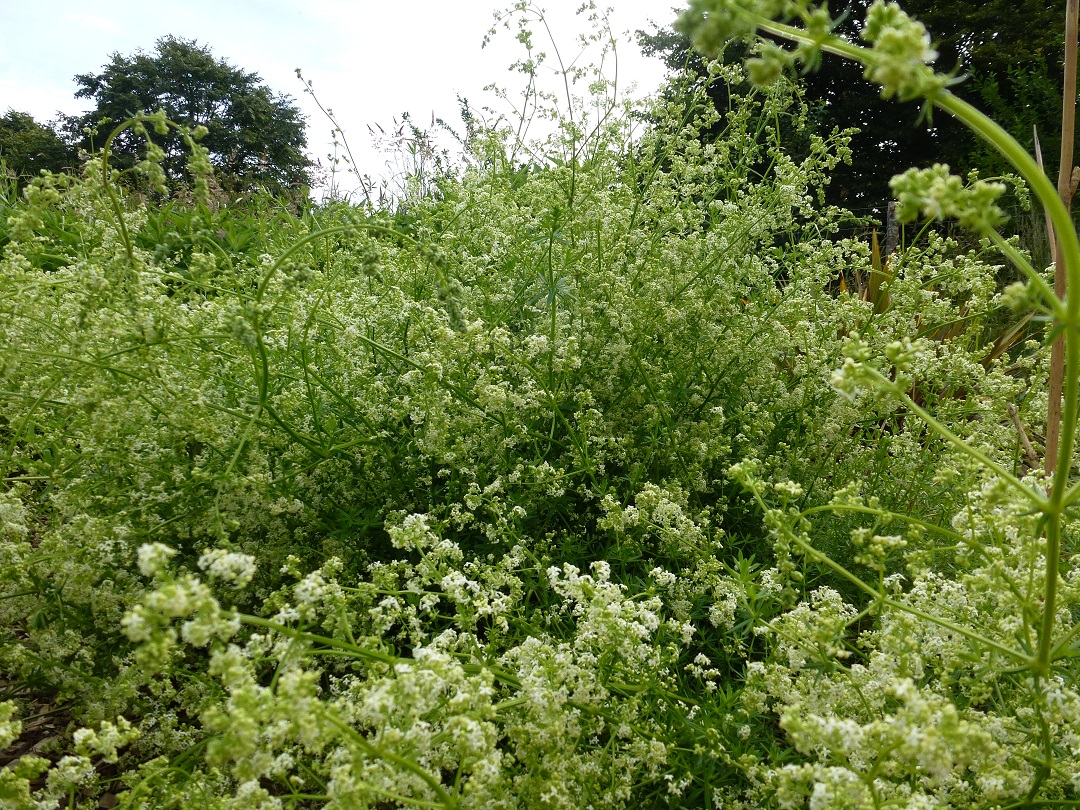 We are very lucky down here in South Devon to have such an abundance of lushly verdant hedgebanks and road verges, often brimming with wildflowers and ferns. These flowers ring the seasons, from early celandines and primroses, through spring abundance of wild garlic and bluebell, stitchwort and campion, to summers of Queen-Anne’s lace umbellifers, ox-eye daisies and knapweed, sometimes studded with pink and purple orchids. Hedge Bedstraw is one of these common and distinctive plants of summer, with dense panicles of white flowers, each only a few millimetres wide, but often so thick it can be easily spotted even when speeding past in a train or car.

Hedge bedstraw is known scientifically as Galium album, though is sometimes still referred to by its synonym, Galium mollugo. It is in the family Rubiaceae, which is one of the largest plant families with around 13,500 species globally. Most of these species are tropical trees and shrubs, including the coffee plant, Coffea arabica, and Rubiaceae is often colloquially known as the ‘coffee family’. However, unlike these tropical trees, the UK’s 17 native species are all in the distinctive Rubieae tribe, which consists of annuals and herbaceous perennials with distinctive whorls of narrow leaves, usually square stems and often scratchy, velcro-like hairs. These include the familiar annual weed cleavers Galium aparine, the scrambling climber wild madder Rubia peregrina, and the small grassland wildflower Lady’s bedstraw Galium verum. Whilst dyer’s madder Rubia tinctorum and Indian madder Rubia cordifolia are the only members of the Rubieae tribe widely cultivated as dyes, many other species have been used historically to produce reddish dyes, albeit in lower quantity than the madders, and with a different mix of alizarin-type dye chemicals.

We had a chance to try dyeing with Hedge Bedstraw species thanks to the lovely gardeners at Schumacher College, an amazing place just a stone’s throw from our own garden. They have a range of highly productive demonstration gardens, including one for cut flowers and crafts, with two decent sized beds devoted to dye plants, which were originally planted up in 2015. Since 2018 we’ve been helping out with tending and harvesting these beds and working with some of their students on dye gardening techniques. In 2020 we worked with them to re-organise the beds, installing more paths for easier access and separating perennial plants into one of the beds, leaving the other for annuals and biennials. As part of this reorganisation, we needed to dig up some of the hedge bedstraw plants which were originally planted too far apart and were starting to take over one of the beds. We’d assumed that the plants were spreading via rhizomes, like madder and many other perennial bedstraw species, but lifting the plants revealed that each one had made a single large clump, and the extra shoots popping up across the bed were in fact seedlings, not suckers. Many of the plants were young, with small, fine roots, but we were delighted to find that the original plants had developed quite substantial chunky root systems. Having previously decided not to grow this in our home garden for fear that it would spread invasively, we are now considering adding it to one of our wildflower borders. 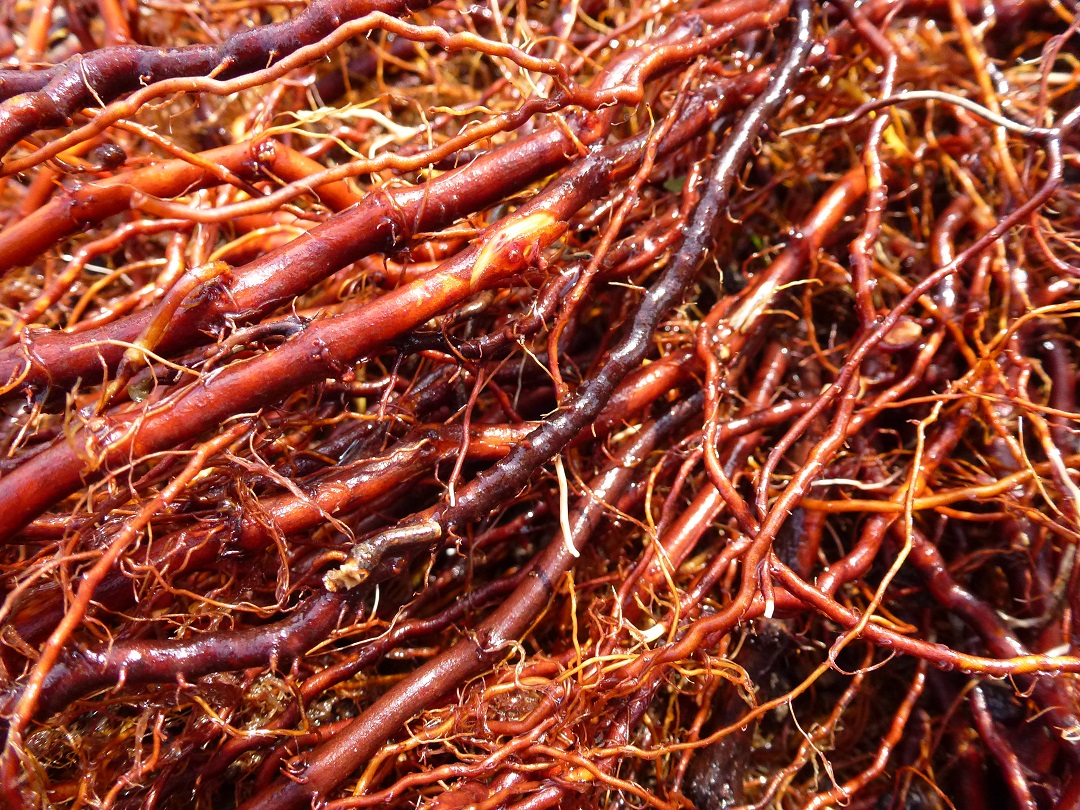 We took the roots home, removed the leafy tops and thoroughly washed the roots. We intended to try using them fresh, but they got left in the shade outside for several hot, sunny days and were partially dried by the time we came to use them. Having read Jenny Dean’s blog about this species, we chopped up about 500g of roots and brought them to a simmer for about 5 minutes, then left them overnight in a hay box, to extract the first dye bath. We then strained out the root and repeated the same process with fresh water to get a second extraction. For the third extraction we whizzed the roots up in a food processor and then repeated the simmer and soak in fresh water. 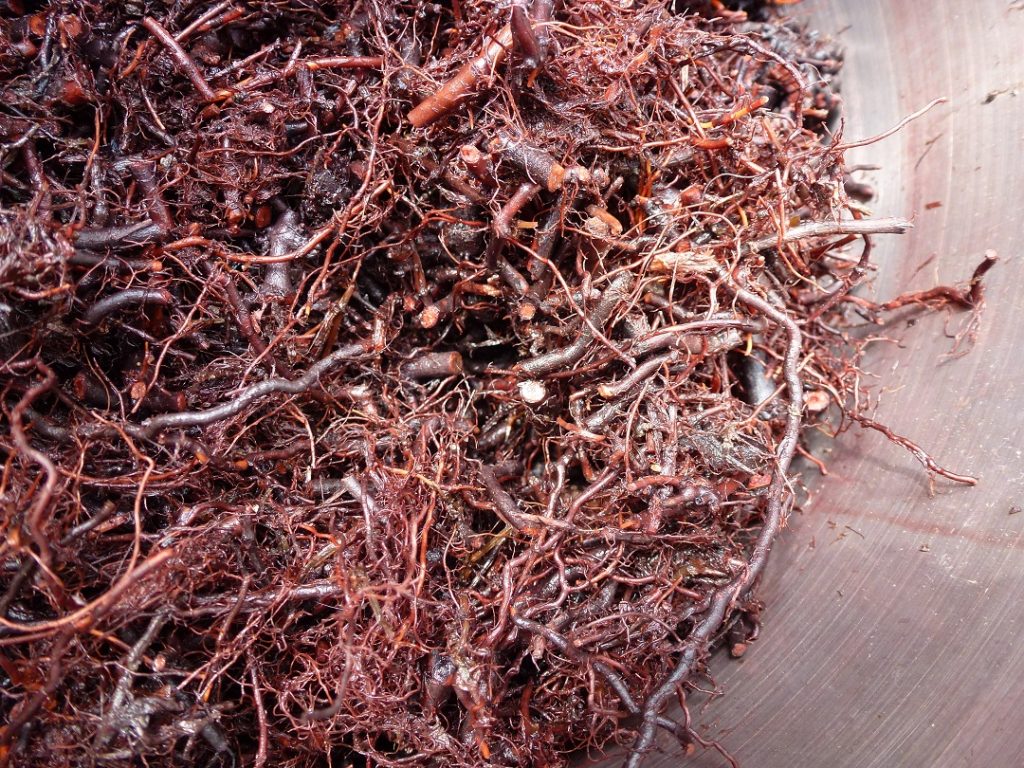 Chopped and washed root of Hedge Bedstraw ready for the dye pot.

We now had three separate dyebaths, which we used to dye cleaned, alum-mordanted southdown fleece. The first dyebath gave good reds, the second bath paler pinkish shades, but still a good colour, whilst the third bath still gave a reasonable pink. We then added more cleaned, alum mordanted fleece to soak up any exhaust which produced paler peachy tones. 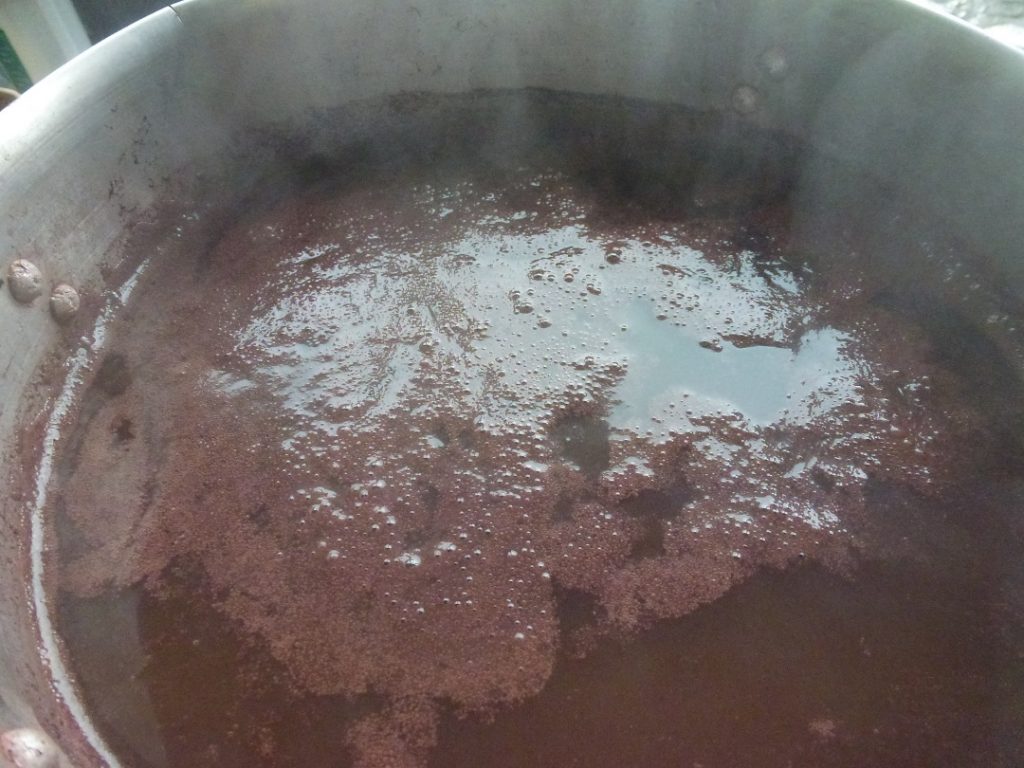 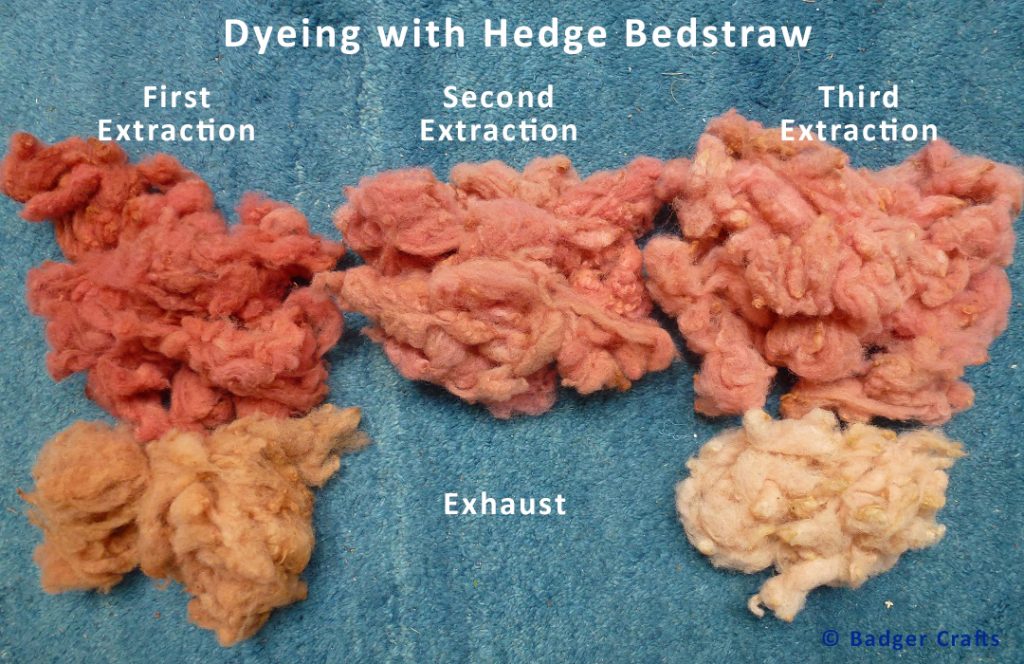