This year I’ve had two reports of people in the UK growing Japanese Indigo from our seeds and experiencing premature flowering in May. I also read with interest Deb McClintock’s blog post about her early self-seeded Japanese Indigo (in mid-Texas in the USA) which germinated in early February and flowered in May. In the first two cases the plants were not remotely big enough to harvest, so this is very disappointing – doubly so since once the plants put out flower heads the amount of indigo in the leaves starts to decrease. Deb McClintock was able to harvest her “bonus crop” but she noted that it had not grown as well as her normal summer crop. Ideally the plants should grow to a large size before flowering in August/September.

So what is going on and what can be done to prevent this?

In all plants, flowering is often stimulated by the experience of stress e.g. unnaturally high or low temperatures, insufficient water or nutrients and pest damage. However, in the above examples the plants were being treated very well. My first thought was that the main cause of the early flowering was day length. In all three cases the Japanese Indigo seeds germinated in January/February when the day length is short. However, I can’t rule out low temperatures since this is the middle of winter in the UK (latitude=50deg N) and the night-time temperature in Mid Texas is going to get pretty low. Also in the UK in 2019 we experienced a Spring with extreme temperature swings and unusually late frosts.

I can find no definitive information online to suggest that low temperature is a known trigger for flowering in Japanese Indigo. But looking in my copy of ‘Handbook of Natural Colorants’ I see that day length is reported as the critical factor for Japanese Indigo, but other influences are not excluded. However it does say that Chinese Woad (Isatis indigotica) will flower if it experiences night time temperatures below 10°C (50°F).

In all three reports of early flowering, the plants received no artificial lighting and were grown in relatively frost free conditions, although they probably did experience night time temperatures well below 10°C. But of course the day length conditions in mid-Texas are considerably less variable than in the UK. (Mid-Texas latitude is approx. 35 degrees North compared to approx. 50 Degrees North here in Southern England).

The Handbook of Natural Colorants recommends sowing Japanese Indigo in April in mid Europe, with a first harvest in July or early August just before the flower heads start to form. It’s interesting to note that by this point in our summer, the day length has started to shorten but night-time temperatures are usually still over 15°C (60°F), so that should rule out cold temperatures as a trigger and points the finger at shortening day length.

However, my own observations in Hitchin for 2018 is that flowering was very late (September/October) following an exceptionally hot long Summer and warm Autumn. This is a much later flowering than normal.  This is confusing because it suggests that the high temperatures prevent day length from being the dominant factor in triggering flowering. No doubt someone out there (perhaps the professional Japanese Indigo farmers) will know the definitive answer but at the present time I’m not sure if it is short day-length or temperature stress which is the most important trigger for flowering. But in either case the solution is the same.

In Southern England, no matter how warm the early Spring, don’t be tempted to sow your Japanese Indigo seeds before April, unless you are able to give them some artificial light to lengthen their day. Giving them a little warmth (particularly at night) is a good idea too. If the plants do start flowering early, pinching out the whole top of the plant may reset them back to vegetative growth. If the plants are large enough it may also work to take stem cuttings in water (cut out the flowering tips). If these measures fail, new seeds can still be sown as late as June in the South of England. 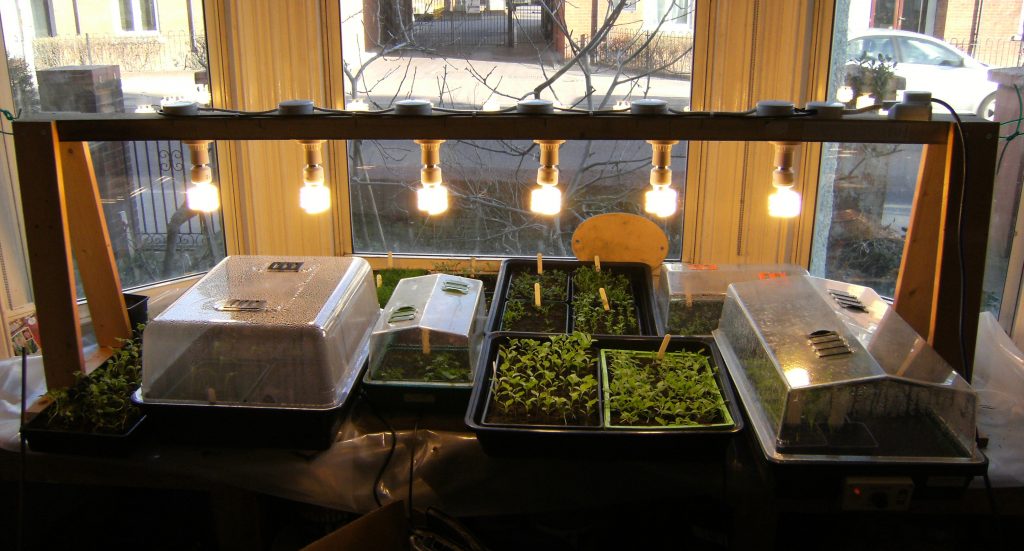 In my own case, I use heated seed trays and artificial lighting on a timer.

Brian Bond for the photo of Japanese Indigo in premature flower.