By Ashley Walker
Copyright 8th May 2019

The weather here has followed the pattern of recent springs by being dry, sunny and warm with cold intervals and frosty nights. Planting out of the Japanese indigo will have to wait for a week or two yet but most plants are thriving. Time to look at last year’s plantings and make an assessment of what has worked and what has not. Last year we embarked on growing a number of new plants, many of which are relatives of Common Madder. Of course many folks have said “What on earth are you doing that for? There is no better plant than Common Madder!” That of course is true but in the past many of these madder relatives were used as dye plants and prized for their colours so we thought we’d try and find out for ourselves how easy they are to grow and eventually what colours their roots will yield.

We first started with Wild Madder (Rubia peregrina) three years ago now. Spring frosts have been particularly hard on the plants as their evergreen upper leaves are not particularly frost hardy. 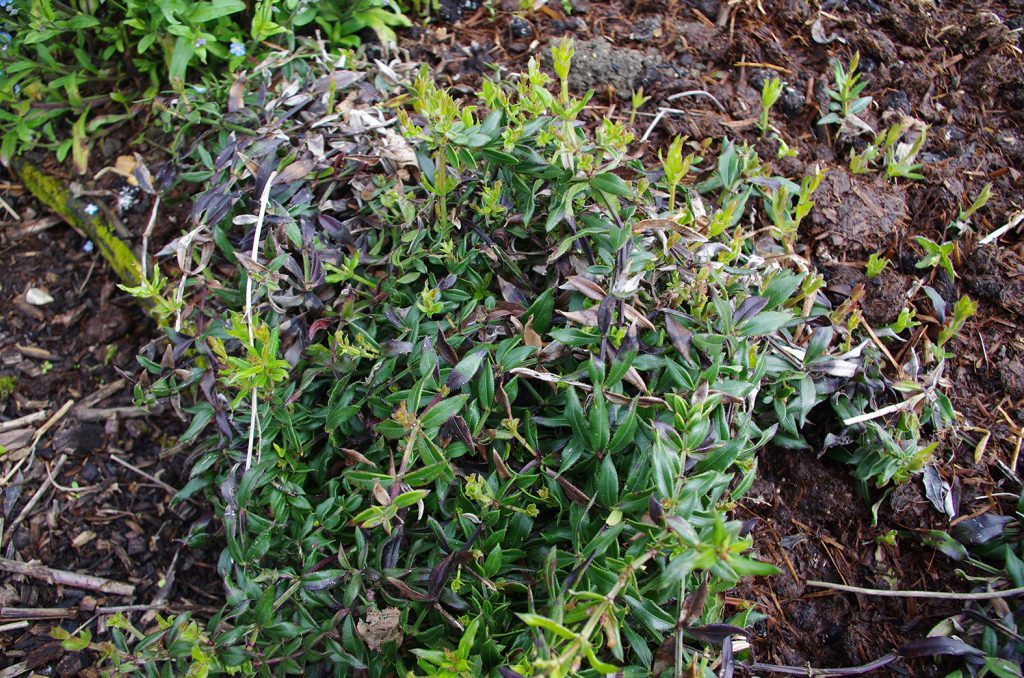 Their native UK homelands are the southern coastline of Devon, Cornwall and Wales where they get warm sea breezes that usually prevent frosts, so here in Hertfordshire they are a bit out of their depth. However the roots are protected and soon shoot back once the warm weather returns. Getting a good harvest from the plant is going to take time, even without frosts it’s very slow growing so we’re not planning to dig any up until Autumn this year. 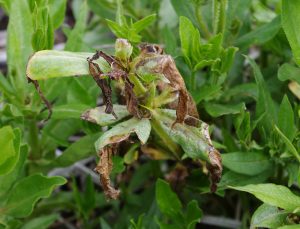 For the first time in many years our Common Madder shoots were badly frosted. Not a problem as the plants quickly produce new shoots

Even our Common Madder beds were badly affected by the frosts with many of the new shoots being crisped. 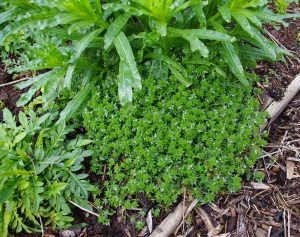 A cushion of Field Madder growing under a Weld plant with Sawort to the left. This plant self seeded last year and has come through the winter without any frost or snow damage.

Generally described as an annual weed, we discovered that given plenty of attention this plant is perfectly capable of going through the winter and withstanding any frosts. Does this make it a short lived perennial? Many hardy annuals can do this and provided they are watered and fed can keep on growing. As this plant has very thin roots, getting a harvest is obviously going to be a bit of a test so we’ve decided to do a little experiment by growing Field Madder and another similar relative Hedge Bedstraw Galium mollugo in large pots in a compost mix that should be easy to wash away from the roots at the end of the year. 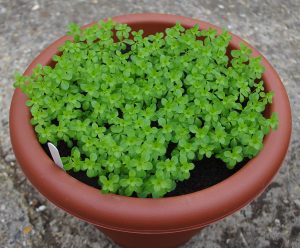 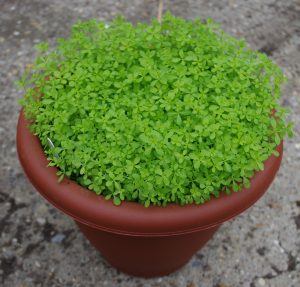 Over the winter I managed to get hold of some seeds from Rühlemann’s in Germany but unfortunately none of these have thus far germinated. As a native of the northern steppe lands of Europe and Asia this may mean they need vernalization. Some of the plants we obtained from Scottish plant nursery (Poyntzfield Herb Nursery)  died towards the end of last year. Plants placed in an ericaceous compost in tubs seemed to do better than those planted in the chalky soil of our Nature’s Rainbow dye garden. This goes against the generally accepted advice that the plant likes alkaline soils. However, It may be other factors were involved. All of our plants died back really quite early in the year and we were afraid they might die out altogether, but back they have come this Spring and they look quite healthy. They have reappeared at the edge of the planters, showing that last year they tried to expand by producing underground stems much like Common Madder. I guess that this means they are capable of also being quite invasive! 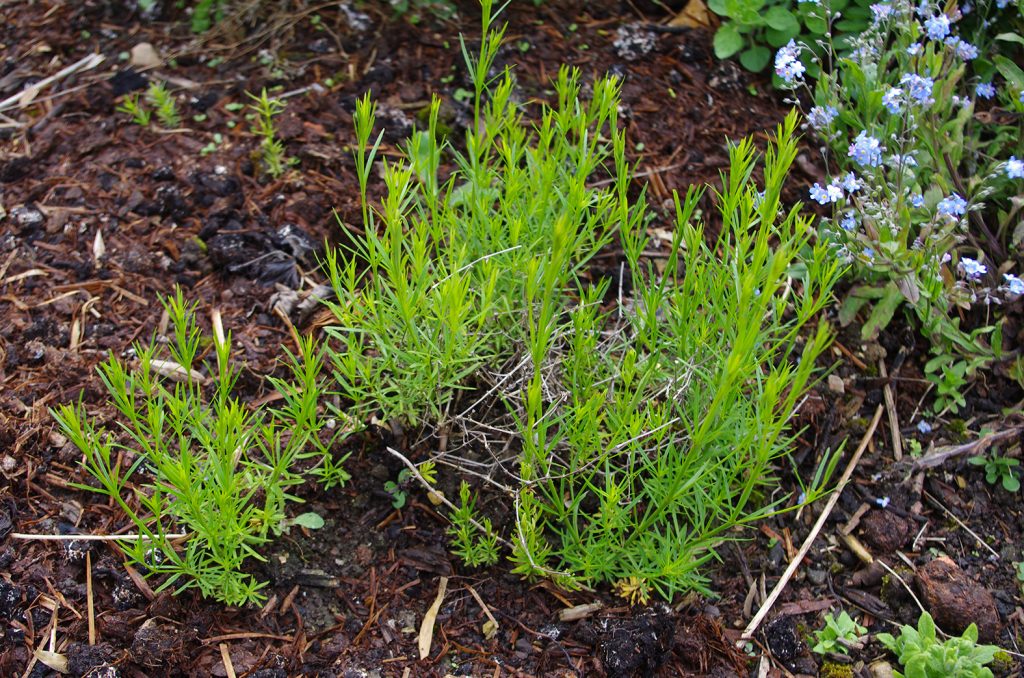 New shoots of Dyer’s Woodruff in the alkaline soil of our dye garden.

This plant has done really well in a whole variety of settings and soil types. It’s also very well behaved with minimal spread. It looks good throughout the year, with pretty clumps of feathery foliage followed by a spray of small yellow flowers in the summer. With its historic interest as a bedding straw, its use in dyeing  and its versatility as an ornamental garden plant, I feel that this plant is a must for any dye garden. 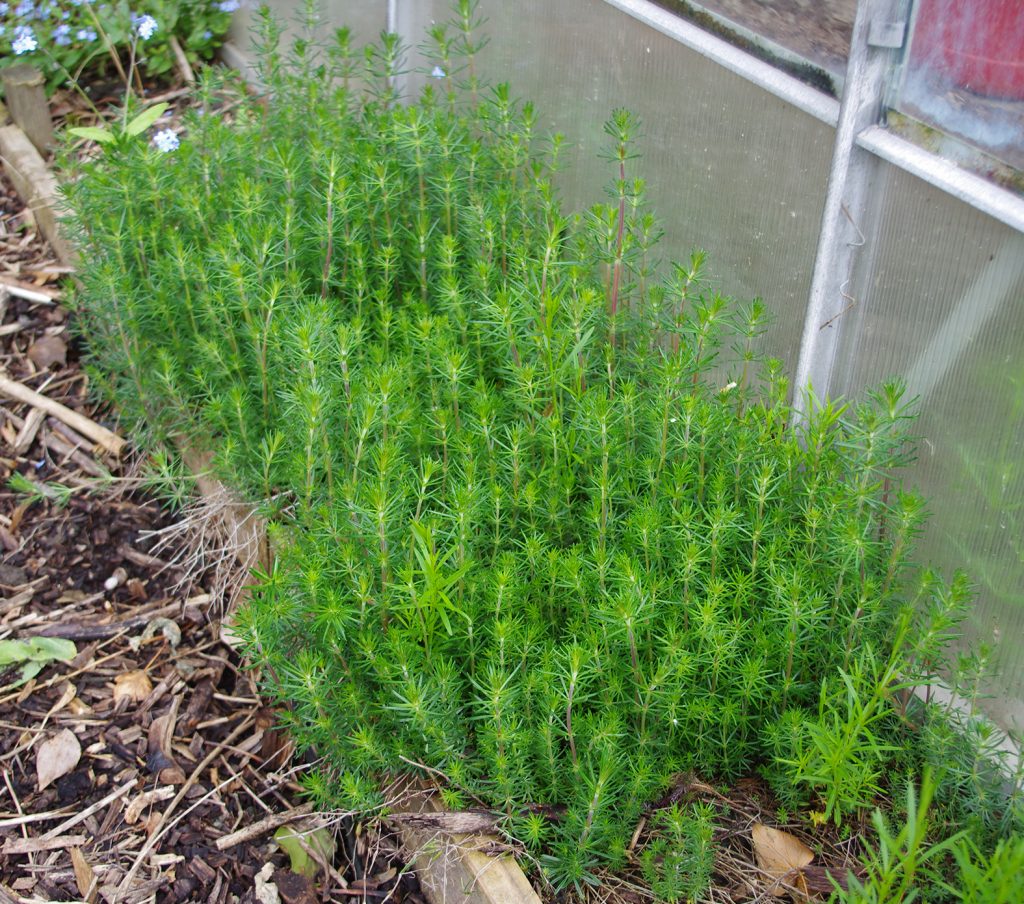 Clumps of feathery green Ladies Bedstraw growing by the greenhouse. 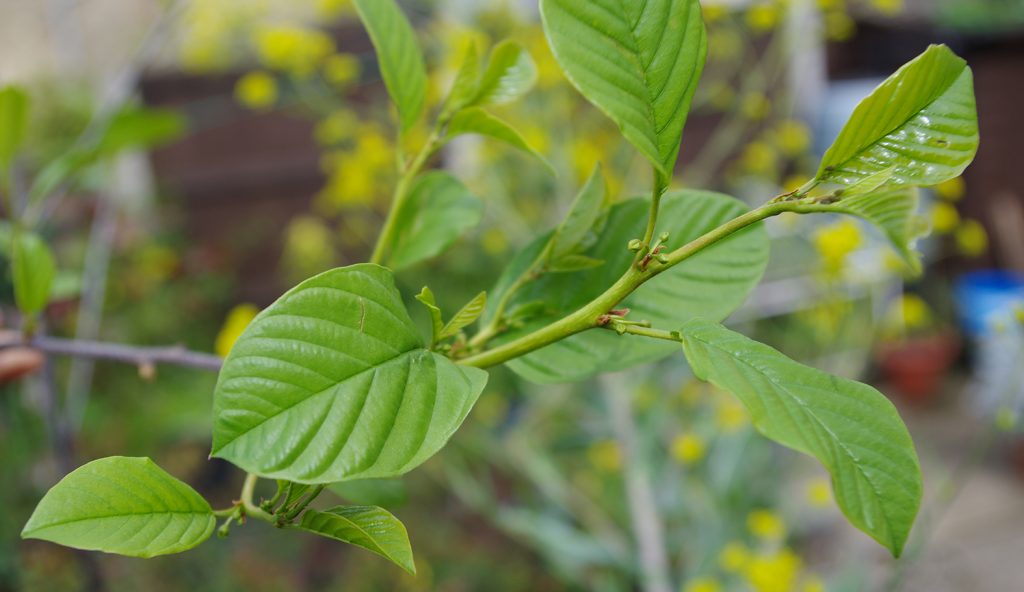 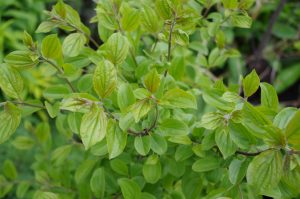 We tried planting Alder Buckthorn, an acid soil loving shrub, in a variety of conditions. Those planted in ericaceous beds or tubs have done well but those planted out in a wild setting in the chalk soil here have suffered greatly, though it has to be said, the most damage was done by muntjac deer who clearly have a liking for it.
The Purging Buckthorn did less well, to my surprise. It’s not supposed to be fussy about soil type. No casualties, but the plants have not grown very much in the last year. Although it could be that this plant simply takes longer to get established. The new growth this year looks a lot better.

As yet the plants are too small to risk any harvesting but I suspect it is the Alder Buckthorn that will give the better dye.

We are now the proud owners of one of these plants. Obtained from the German Herb nursery Rühlemann’s, this plant spent four and a half days in a box being transported across Europe, the English Channel and finally to our door and arrived in perfect condition! Many thanks to Rühlemann’s  for doing such a professional job of packaging it up, we have great admiration! The growing tips had faded a little during transit but greened up rapidly on exposure to light.
According to the literature these rather elegant looking plants should just be able to survive outside in the UK, though I’m not taking any chances until I’ve had a chance to propagate some cuttings.  At first sight it looks quite different to Common Madder but it has the same leaf whorls (but only 4 leaves to a whorl as opposed to Common Madder’s 4 to 6) and has hooks on the square and weak stems just like madder and cleavers. It obviously has the same growing strategy i.e. it clambers over other plants, holding on with its small hooks. 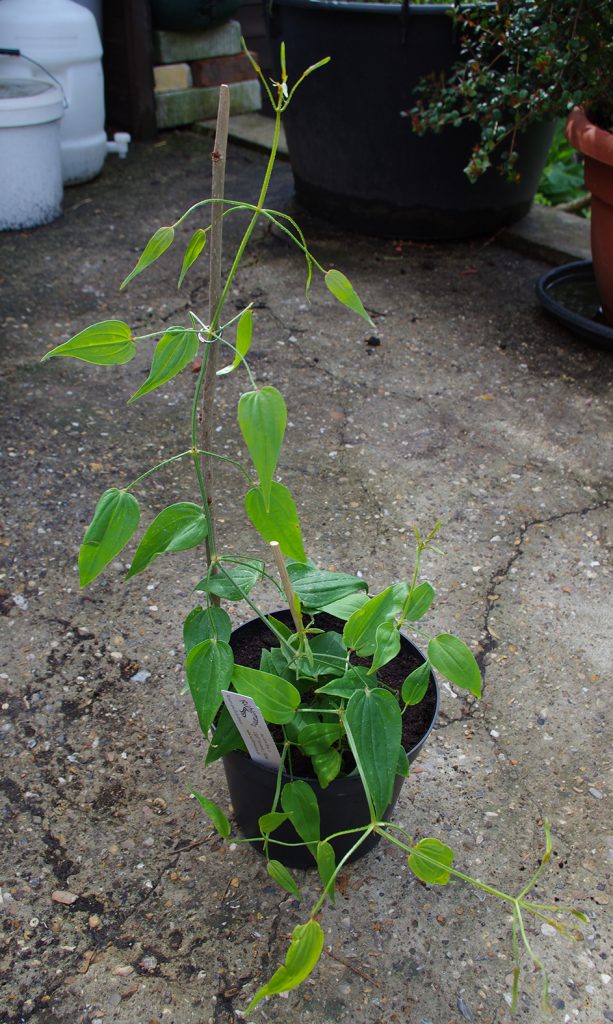 The Munjeet plant about a week after arriving. Repotted to a larger pot and already starting to grow and looking very healthy indeed 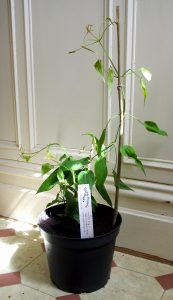 We are ridiculously excited by this latest acquisition and look forward to see how it grows and what sort of dye giving roots it has. According to Cardon* its chief dye substance is munjistin which gives a very bright orange. Like common madder it also contains many other dye stuffs, including a very large range of yellow to red anthraquinones. Alizarin is present but only in small amounts so the overall light fastness is probably not as good. Cardon mentions that there are different varieties of cordifolia as well as a very closely related species (Rubia akane) that grows in Japan. Our plant is advertised as being from Tibet, so hopefully it will be able to cope with frost during the winter. 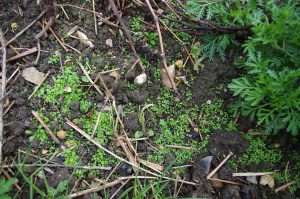 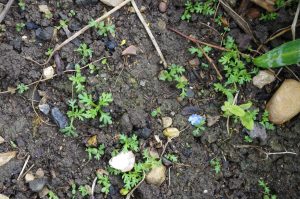 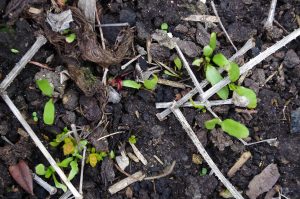 This year we have had a number of self-seeded Common Madder seedlings in planters positioned near the house. They have produced seedlings in the garden during the Autumn before now, but these usually die during the winter. I think the weather has been just right this year to encourage spring germination and the temperatures near the house have prevented any frost damage.

Finally a little note on self-seeding of dye plants. We have always tried to encourage plants to self-seed in our garden, with some success. We have been growing the plants for a long period now and the soil is loaded with seed. Weed plants have been under control for several years, so there should be nothing to stop those plants which can self-seed from doing so. So here’s a check list of what you need to do to follow suit:

Finally I have managed to sow all three varieties of Japanese indigo at the same time to complete our comparative studies (see blog post). Sure enough, it is possible to tell the difference between the long leaved variety and the broad leaf variety. Even the photos show the slight difference in foliage colour (the broad leaf being a more yellow green) and the long leaf plants are a centimetre or so taller. These plants are about 3 weeks old and grown under identical conditions. The intermediate variety more closely resembles the broad leaf.

3 varieties of Japanese Indigo at three weeks from sowing.

We have found something that eats madder. 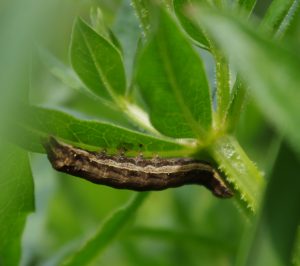 This is probably the caterpillar of the Orange Underwing moth, a known pest in the UK which eats a whole variety of plants. So we’re not surprised it’s had a go at our Common Madder. Fortunately there are not enough of them to do any real damage, but they do spoil the appearance of the plants. We can live with that, so no need to take any action.

Rühlemann’s herb nursery has an excellent collection of dye plants and seed for sale and don’t mind sending stuff to other European countries. Their service is excellent.

* Dominique Cardon, Natural Dyes : Sources, Tradition, Technology and Science   . The Definitive reference book of dye plants and dyeing. If you want to know what dye plants are native to the country you live in you will find the information here. A master work, expensive but worth every penny. 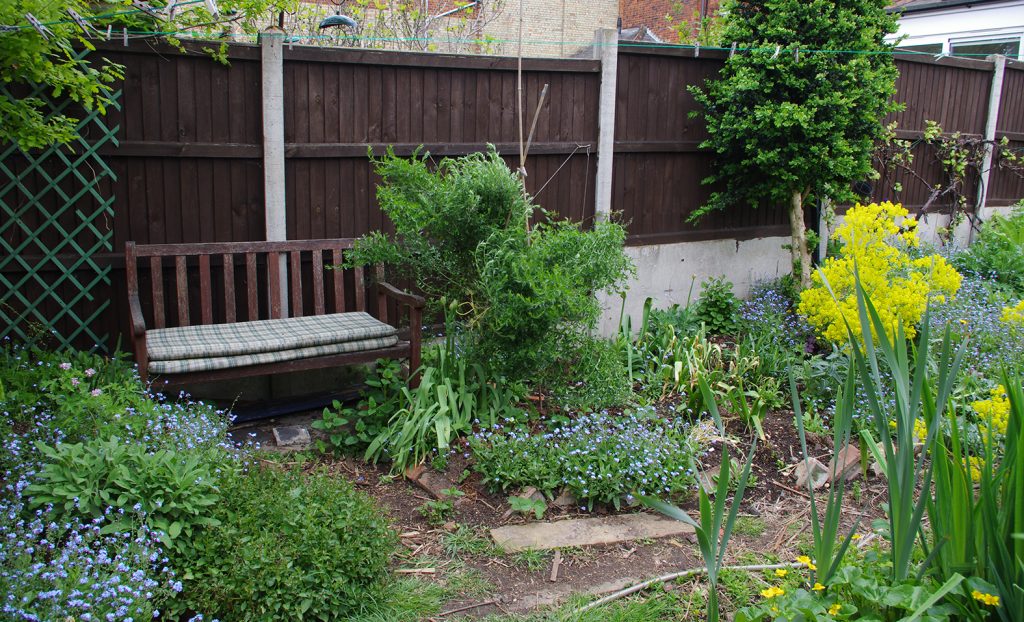