Common Madder (Rubia tinctorum) is an excellent source of red dye. It is indigenous to Southern Europe, Middle East, Central Asia and North Africa but has many close relatives (in the genus Rubia) around the world. As a herbaceous perennial, Common Madder dies all the way back to the soil at the end of every year. This means that madder beds can be mulched over the winter to suppress weeds and protect the soil from nutrient loss. Mulching with well-rotted manure or other soil improvers will have the added benefit of fertilising the soil. Madder shoots appear in March and will withstand mild frosts. They grow into a mass of long clambering stems which need support to grow above a foot or two in height. Madder will tolerate coastal conditions of wind and salt and is highly resistant to pests and diseases. Seedlings will benefit from protection from slugs, but the shoots of mature plants need no protection. Growth can always be improved with a little fertiliser and watering in hot dry weather but we generally leave our madder to fend for itself and it still gets good harvests. The green part of the plant contains very little dye stuff but was used as animal fodder and reportedly would turn their bones red over time.

Growing Common Madder requires considerable investment from the dye plant gardener. From seedling or cutting it takes three to four years before the roots have swelled to provide a satisfactory harvest. Time is not the only consideration either. The plant is highly invasive and if neglected it will spread to the rest of your garden. The plant’s main method of propagation is the underground stem which grows horizontally under the surface and pops up one to three feet away. If you are a diligent (and ruthless) gardener you can keep on top of it by pulling up the shoots every time they reappear. Our approach is to set aside part of our vegetable allotment for madder. We remove stray roots as and when we dig the vegetable beds over. In ten years we have only once had to take more drastic measures when the madder was heading for the neighbour’s allotment. Madder roots and shoots are relatively thick which makes them easy to remove when digging; keeping the plant under control is far easier than dealing with perennial weeds like bindweed and couch grass. If you have no ‘out of the way’ space suitable for madder and you maintain an ornamental garden, madder can be grown in a large raised bed with deep walls to prevent the underground stems from escaping or, failing that, a very large planter. Setting up a separate raised bed each year for four years would allow you to harvest madder every year. The larger the container or raised bed the better. As with all container gardening, the plants will need extra attention to watering and feeding compared to madder grown in open ground. Madder berries turn from green through red to black. Although the black berries produce a wonderful red juice it does not appear to be a useful dye.

Madder also propagates itself by seed. The seed of Cleavers (a close relative) is covered in tiny hooks which attach to passing animals. With Common and Wild Madder the large seeds are surrounded by a juicy black berry which is eaten and spread by birds. Madder seed once dried is notoriously difficult to germinate. Many sources suggest that it will self-seed readily in some countries but we have never come across a seedling in our allotment. All of our madder beds were derived from a single seed we managed to germinate many years ago. So if you know someone who is already growing madder ask them for a root cutting from the underground stems in the spring and you may save yourself a lot of time.

Note: If growing from seed I previously recommended using advice from a scientific paper [1] which had found that soaking the seeds in very hot water for a few minutes would help break the seeds dormancy but having tried it ourselves I can categorically withdraw this advice. DO NOT DO IT! All I managed to do was kill the seeds! I will be writing up the results of this experiment soon.

Further Note: with hindsight it would appear that my attempts to follow the scientific advice were faulty. The amount of hot water used should be minimal, i.e. just enough water to provide a bit of a puddle that the seed can sit in. Using only a very small amount of water ensures that it cools very quickly hopefully preventing any damage to the seed.

With its scrambling habit and close resemblance to cleavers, most people would not judge Common Madder an attractive garden plant. However, if weeds are kept at bay, large beds of madder produce beautiful clouds of tiny yellow star-shaped flowers in July/August and glossy black berries in October. Providing support for it to clamber over also improves its attractiveness. There are two main types of root: bulbous true roots and straighter underground stems or rhizomes.  Once established, the adventurous rhizomes soon start to swell and take on some of the characteristics of real roots. They begin to produce and store the various substances that bear pigment. Both true roots and new plant shoots grow from these rhizomes. The bulbous true roots are the most prized by dyers but three year old underground stems can be just as good so do not discard them. Network of underground stems just under the surface. Having to dig up the root is often cited as a barrier to growing Madder, particularly if the soil in your garden has a lot of clay but there are many ways to make the task easier. If you do have heavy soil invest in several bags of soil improver and a few bags of sand and dig in well before planting. If that sounds too strenuous, create a “no dig” bed and spread over it a very thick layer (at least one foot or thirty centimeters) of a mixture of manure, soil improver and sand. Top this up in the second or third winter. It is true that madder roots will go very deep (several feet) into the ground but there is no need to dig down that far as most of the roots, including the largest ones, are usually near the surface. Root stems and rhizomes before and after washing. With a little gentle brushing the outer surface of bark (which contains brown dyes) can be removed to reveal the orange flesh of the root. The difference between root stem or rhizome and true roots is seen here . Root stems are invariably straight and have a woody ring with red pith centres. True roots are twisty and have a thin woody centre. Soil type is not important to the health of the plant but growing madder in an alkaline soil stimulates the production of the red dye stuff. We are fortunate to have a light chalk soil in our garden which is already quite alkaline. For acid soils an application of lime will improve the dye yield.

The general consensus is that the best time to dig Madder in Northern Europe is late Autumn, after the roots have been replenished by a full season’s growth. The worst time to harvest is Spring when all the nutrients are coming out of the roots and going into new growth. However, we have harvested at all times of the year and found that the results are  similar so don’t be too constrained by the literature. Of more import is what you do with the roots after harvest. 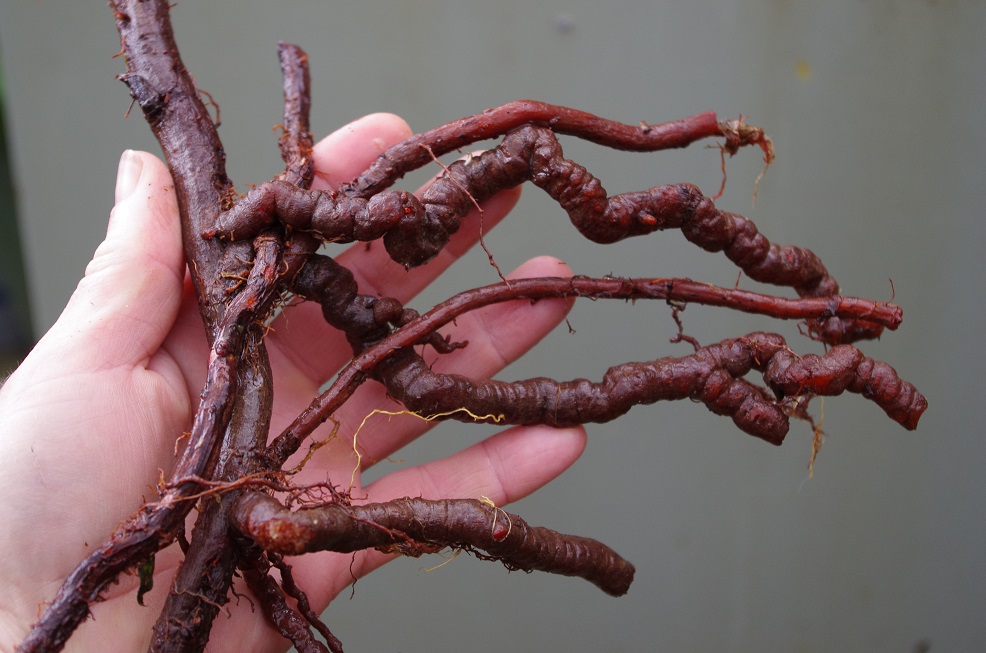 Once removed the outer bark reveals the translucent orange flesh. The central woody core can be seen here through the root. Washing the roots with a jet of water

First they need to be washed to remove loose soil. This can be done with a hose connected to the mains and the spray head set to a narrow jet.

We leave the wet roots to drip dry outside in net wash bags and then move them to a warm, dry place out of direct sunlight where they will get plenty of air circulating around them. It takes around one to two months to fully dry the roots, when they can be snapped by hand or chopped up for storage in air tight containers or paper bags in a dry place. Slow drying followed by long storage allows more of the precursor substances in the root to be converted into alizarin which is the substance that gives the classic pink/red. The root is admittedly easier to chop when fresh but then much more difficult to dry unless you have access to a herb dryer.

The clean roots can be used immediately but remember that most dye recipes specify quantities for dry root. Our experiments show that drying reduces the weight by a factor of six. So rather than 50% weight of goods you will need 3 times the weight of goods in madder. Fresh root is also useful for dyeing cloth in eco-bundles. The dried root is chopped up for final storage.

Although it involves more work and considerable patience, we much prefer to dry the roots and keep them for a year or so before use. Indeed we think that along with our chalky soil and hard water, this may help to explain our success in achieving very good reds from our home grown madder.

Other red giving plants for your dye garden

It could be argued that Common Madder, being so easy to grow and yielding a great deal of pigment is the only dye plant in the UK worth growing for reds. However why should we limit our plant dye and botanical knowledge in this way? There are a number of related plants which have played an important historical role where soils are not well suited to Common Madder. While it is against the law to uproot any wild plants, many of these can be easily grown from seed and some are available from wildflower nurseries. Examples include Field Madder (Sherardia arvensis), Wild Madder (Rubia peregrina), Lady’s Bedstraw (Galium verum) and Dyer’s Woodruff (Asperula tinctoria). Wild Madder appears very similar to Common Madder but is evergreen and grows wild in South West England and South Wales. Lady’s Bedstraw is a lovely perennial wild flower with dense clouds of yellow flowers in July and August and surely deserves a place in the dye garden? It is said in the literature that these relatives of madder do not provide as much colour as Common Madder, primarily because the plants are harder to harvest and the roots are thinner. Even the common weed, Cleavers or Goosegrass (Galium aparine) is said to contain similar pigments to Common Madder although its thin roots are unlikely to yield enough for true reds.

A further article based on the book “Madder Red” by Robert Chenciner will be posted later in the spring when I’ll be looking at the history of growing madder and its lessons for the craft grower.